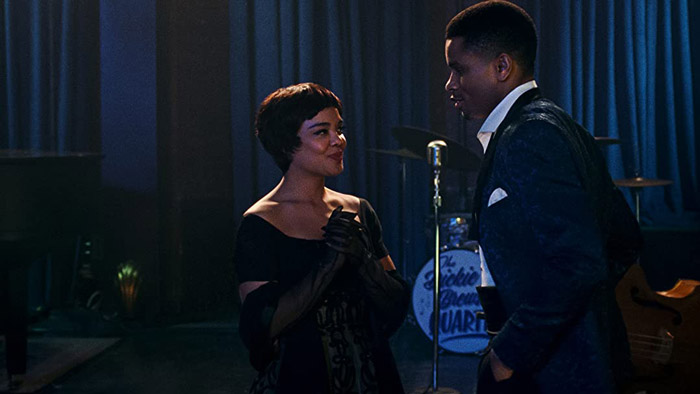 Tessa Thompson has made a name for herself playing heroes who radiate with chaotic charisma. With Dear White People, Thor: Ragnarok, and Sorry To Bother You, she offered women who wore their hearts on their sleeve, were streetwise, suffered no fools, and did all with a smirk that promised trouble you couldn’t turn down. Now, she’s flipping the script, playing well outside this firebrand niche, to stroll through a dreamy old-school romance, Sylvie’s Love.

Written and directed by Eugene Ashe, Sylvie’s Love’s story begins in 1957 Harlem, during a hot summer that two young lovers will never forget. Thompson stars Sylvie Parker, a polished debutante whose mother expects her to become a poised housewife. Dressed demurely with easy grace, Sylvie is on that path, even having secured a rich and respected fiancé (Alano Miller), who’s currently away on military service. However, Sylvie’s head is turned, first by the glowing television that buzzes in the back of her father’s record shop, then by the dashing jazz saxophonist who interrupts her enjoyment of I Love Lucy.

His name is Robert Calloway (Nnamdi Asomugha). Before he came to New York City to chase his dream of music stardom, Robert grew up in the rough projects of Detroit. By contrast, the bustling night clubs of Manhattan are dazzling, but not as much as Sylvie, whose laughter fills the shop, as Lucille Ball stuffs chocolates down her blouse. The two are so young and beautiful that romance is inevitable, backgrounds and boyfriend be damned! Shared time at the record shop soon leads to a night on the town, then a kiss. Sylvie’s conflicted because she has a beau overseas, but Robert’s warmth and allure cannot be ignored. Through montage scenes of picnics, rooftop canoodling, and a bicycle built for two, Ashe paints a rapturous romance that seems plucked from Hollywood’s Golden Age.

Thompson leans into this aesthetic, playing Sylvie with a dreamy staccato reminiscent of Audrey Hepburn, particularly in Funny Girl, where impish ingenue danced carefree yet cool. She seems happily at home in these ’50s (then ’60s) fashions, which shape her curves coquettishly. The rhythm of romance is built with a soundtrack of classic songs, sung by Sam Cooke, Billy Haley, and Stevie Wonder. Asomugha proves her perfect partner, waltzing with her through meek flirtations to blossoming passion and aching regrets. All of this, is awash in a sensuously saturated color scheme, which harkens back to Technicolor opulence. Every inch of the frame is packed with bold yellows, reds, and teals, all of which make the lead lovers positively glow, their flesh sparkling as if it’s the stuff of stardust.

Pardon me. I got so swept up in the style of Sylvie’s Love, I forgot to tell you the actual plot. Once the summer is over, both Sylvie and Robert have tough decisions to make. From there, the film follows their lives, as they chase their dreams and reflect on the past. Sylvie pursues her passion for television by seeking work in production, while Robert tours the world with his band. Then, they reconnect, and the sparks are still there, still undeniable, still dazzling. Flowing through years with a slippery but fluid pace, the film slides through victories, battles, and tragedies. It goes so smoothly that the hard-hitting moments of loss don’t really land. Some are skirted past, while others are setup without payoff. However, in a year that’s brought so much pain, the thinness of the plot and its modest melodramatic beats seem a blessing. Trauma is not the focus or even an interest of Ashe’s story, just love, so selfless that sometimes it pries soul mates apart.

As far as romantic dramas go, this one might well be considered a lightweight. I’d argue that’s among its virtues, as its characters are as resilient as they are lovely. Everything about Sylvie’s Love is lovely. The costumes are a vision, idealizing this era’s fashion with a cranked-up color and a preserved grace. The settings—from hazy nightclubs to sun-bleached rooftops and streetlamp-lit sidewalks—are a picture-perfect playground for romantic fantasy. The soundtrack swings and zings with songs of joy, love, and longing. Thompson and Asomugha are swoon-inducing as the lead lovers. Yet they are bolstered by a spirited supporting cast who dives into the film’s vintage crispness with aplomb. Tone Bell crackles as a boisterous band leader. Aja Naomi King shines as Sylvie’s frisky and fearless cousin/confidante. Jemima Kirke lives a diva fantasy as the cool, smirking Countess, while Wendi McLendon-Covey brings her brassy broad comedy as a chipper TV chef with a sailor’s mouth. Last but not least, Eva Longoria is glorious as a supportive wife/whiz-bang dancer, whose unexpected number is sparkling and exhilarating.

← Review: Chadwick Boseman is Excellent in His Final Role in Netflix's 'Ma Rainey's Black Bottom' | 5 Shows After Dark: 'Next' Finale on Fox, 'The Price is Right at Night' on CBS →