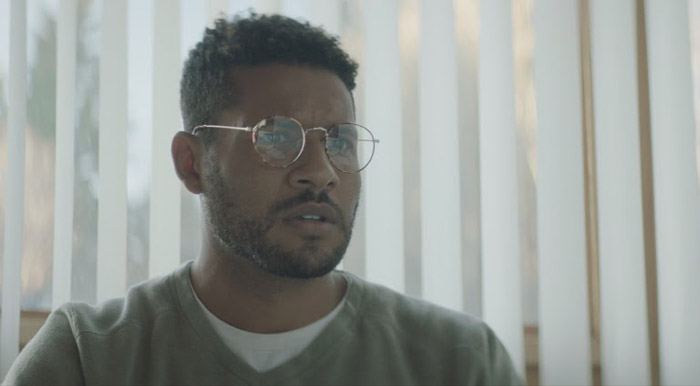 With the success of Get Out, we’re seeing a rise in imitators trying to capitalize on Jordan Peele’s unique vision for body-snatchers horror. With Antebellum, a slick ad campaign skillfully hid what was a dreadful premise that totally misunderstood the appeal of the movie it primed audiences to recall. Now comes Spiral, a movie that wants you to think of it as the gay Get Out, when it’s really little more than an uneven Stepford Wives retread.

Directed by Kurtis David Harder, Spiral centers on Malik (UnReal’s Jeffrey Bowyer-Chapman), a husband/stepdad/writer who is thrown for a loop when his family moves to the suburbs. His partner Aaron (Ari Cohen) is enchanted with their new home and friendly neighbors (Chandra West and Lochlyn Munro), while teen daughter Kayla (Jennifer Laporte) is immediately obsessed with the James Dean-looking boy-next-door (Ty Wood). Meanwhile, Malik immediately begins to notice troubling cracks in the facade of this happy new home. However, his fears are quickly dismissed as the hysterics of an unstable mind.

This perspective is a major difference between Get Out and Spiral. In the former, our hero isn’t immediately aware of the threat behind the smiling faces that surround him. Conversely, Malik is swiftly suspicious, which ties him more closely to the traditions of the “hysterical housewives” Joanna Eberhart (The Stepford Wives) and Rosemary Woodhouse (Rosemary’s Baby). To the credit of screenwriters Colin Minihan and John Poliquin, they solidly establish Malik’s inner life, which is fraught with insecurity. He feels uncertain in this home before he ever steps in the door because of his wobbly place in his family.

Aaron is the breadwinner of the household and makes snide remarks to this effect to guilt Malik into doing chores. Malik works from home as a ghostwriter, a profession that Aaron and Kayla both roll their eyes at as if it’s not a real job. Defensively, Malik promises he will someday write something of his own, something that matters. In the meantime, he struggles to prove his worth around the household. So, he chooses not to draw attention to unpleasant developments like a break-in that leaves a homophobic slur spraypainted across their livingroom wall.

Causing deeper anxiety is Malik’s past, revealed in an opening flashback. While gay bashing may be a foreign concept to his rich, white husband, teen Malik experienced the force of such hatred firsthand when he and his then-boyfriend were thrashed for making out in public. Malik’s trauma is regarded by his household as the cause of fear, paranoia, and self-destructive behavior. Even as he shares his feelings, he’s gaslit by those who love him. No wonder he’s calling Trevor on the sly. He needs emotional support from somewhere!

Malik’s character development is patiently crafted in the way of ’70s horror, which is exhilarating to see. Regrettably, no other character nor the emerging plot show such depth. Aaron and Kayla have all the dimension of cardboard cutouts, while the neighbors are transparent vipers with soccer mom smiles. This undermines what tension might be mustered from the psychological thriller angle, as these moves are so familiar that horror fans can step through them with our eyes closed. The supposed twists of the film are telegraphed in that they are cliches of cult horror. That leaves those familiar with these tropes to focus on the details, which don’t hold up to scrutiny. The concept is creepy, but the execution races from mood to mayhem with a gnarly mythos that invites side-eye.

It’s a shame. There’s some rich ground tread in Spiral, tugging at the roots of horror classics that warned of the pleasant face of suburban conformity. Bowyer-Chapman gives an earnest performance achingly laced with panic, which is undeniably affecting. The rest of the film feels too flimsy to allow the final act to hit as hard as it should. Sure, there are some surprises and jolts of horror and gore that make for sickly thrills. Overall, Spiral is spooky fun, yet far from sensational or even satisfying.