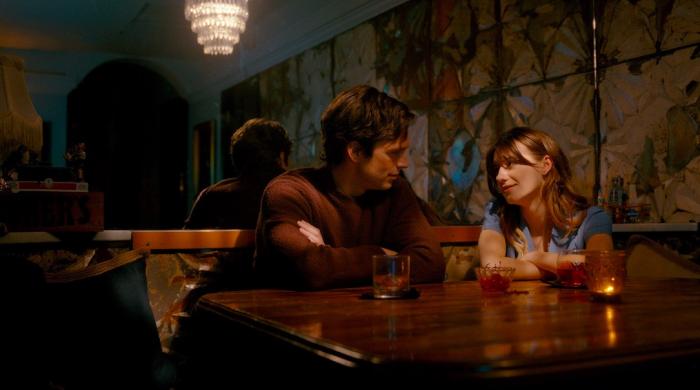 Now on Hulu: Sebastian Stan and Daisy Edgar-Jones Put The 'Meat' In 'Meet Cute' With The Horror Rom-Com 'Fresh'

Noa (Daisy Edgar-Jones) has given up on love. And with good reason. We watch her suffer through an excruciating date early on with an oversize-scarfed douchebag of the douchiest degree, and we can feel our own belief in that particular four-letter word draining from our bodies as well. Dating apps meanwhile are a minefield of pop-up dick-pics; one cute trainer at her boxing class has enough over-cooked enthusiasm to shrivel up anything approaching romantic interest. The single life’s not seeming so bad from here! And yet that’s all prelude, as it ever is in every romance, to the movie Meet Cute, when the right mister prince comes waltzing along. Here he’s named Steve, he looks like Sebastian Stan (because he’s played by Sebastian Stan), and well, what’s to be expected? There will be cuteness. (There will also be meat.)

And for the first half-hour of Mimi Cave’s darkly hilarious and genuinely disturbing directorial debut Fresh, a nightmare rom-com that switches back and forth between the precision of a scalpel and the mayhem of a meat-tenderizer by ever-messier degrees as it goes, that’s what we get. Hella cute! Two pretty young people getting to know one another in that fussy awkward way people do over home-delivered short ribs and squish-nosed chit-chat. He’s a doctor, a plastic surgeon to be precise; one who feels good he sometimes get to use his work to help disfigured kids in between boob jobs. But what he really is is too good to be true, and even without me having just described this as “a nightmare rom-com” his unfussiness has plainly been fussed just right, just so.

Noa’s kick-ass bisexual best friend Mollie (Jojo T. Gibbs) immediately clocks some red flags—who doesn’t have an Instagram? And dude just came up to her in the grocery store with some cheesy lines about grapes? And when, over those aforementioned short ribs, Steve scoffs, “I just don’t eat animals,” one’s brain should by then be screaming, “Phrasing!” Because them’s some purposeful word choices. Half an hour in and two scenes later when the opening credits finally roll the film reveals itself for what it really is, and you’re shaken but probably not stirred—Fresh is about to slice and dice modern romance til its belly’s over-stuffed and blood’s pooling around its feet.

That fateful first trip away together is always when couples really get to know one another, and Noa and Steve are about to get to know each other real good, inside and out, as they head off to the woods for this romantic weekend for two. He’s got a dream house buried in the upstate forest that’s straight out of Architectural Digest, but unfortunately for Noa the emphasis ends up more on the “digest” and less on the architecture. Has my coyness worn out its welcome yet? Well too bad, I’m not going to explicitly state Fresh’s horrors, even if the film, like my quippy lines, is about as blunt as a bone-saw. But if you ever wondered what might happen if Promising Young Woman met cute with Patrick Bateman then have I got the movie for you!

Cave delivers a gorgeous looking film, showing a keen eye for surface, texture, color, whether it’s the grain of expensive stone lining a staircase or the marble of a slab of meat being enthusiastically vacuum-sealed. And a dark humor permeates Fresh like a black heart pumping blacker ooze up and through its misplaced jumble of organs, jammed back where they never went, never meant to go. It tickles as it goes down!

The one percent of the one percent gets sent up and skewered with near-Salo levels of sadistic wit, most especially in Stan’s performance—unhinged as his flip-top head’s ever been the one-time Winter Soldier is having a blast biting into Steve, dancing around to enough cheesy 80s music to put any American Psycho to shame. Sure it all might hit the marrow so hard it shatters—this is not the place for subtlety and Fresh’s last act, splayed in red chaos, torrents of it, might for some go a little far. Me though, I dug its visceral anger. Big emphasis on the viscera.