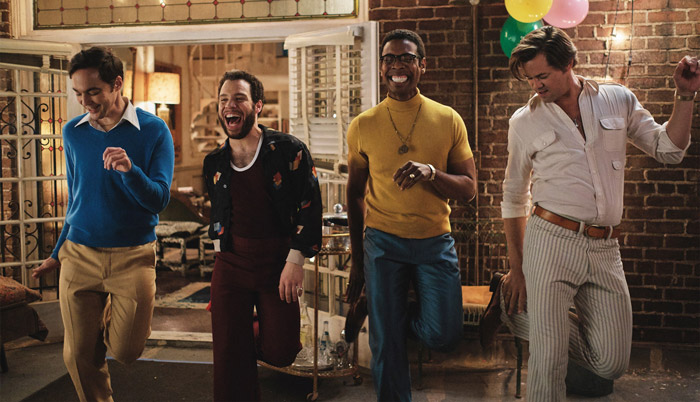 Now On Netflix: Ryan Murphy's 'The Boys In The Band'

The Politician. Hollywood. Ratched. The latest attraction in Netflix’s Ryan Murphy parade is The Boys In The Band, a movie adaptation of Mart Crowley and Ned Martel’s 1968 play. Murphy produces, not directs, nonetheless this film tromps into his preferred brand of queer representation: vicious queens and gay trauma. There are no women in this production, so there’s no campy diva to idolize and horrify. Instead, the focus is solely on the men who gather for a misery-inducing birthday party.

Jim Parsons stars as Michael, the uptight host who has readied cracked crab and a carefully curated guest list, so the birthday boy and his friends can be out and proud without worry. Set before the Stonewall Riots, this posh Manhattan pad is situated in a time where vice cops violently raided gay bars, bathhouses, and gatherings with impunity. However, Michael’s plans are immediately falling apart as his blue-collar pal Donald (Matt Bomer) drops by with little warning. Still, at least Donald is a part of the scene. When Michael’s old college roommate (Brian Hutchison) calls weeping, an invite becomes trickier as this chum, who has a wife, kids, and a straight-laced life, would be shocked by how these gay friends celebrate.

Nonetheless, the rest of Michael’s friends roll in. Flamboyant Emory (Robin de Jesus) fwaps a fan and hollers raunchy one-liners. Reserved Bernard (Michael Benjamin Washington) jokes and dances, but carefully code switches when the breeders are watching. Smirking Larry (Andrew Rannells) arrives with his square lover, Hank (Tuc Watkins), followed by a beaming himbo, hired for the night and known only as Cowboy (Charlie Carver). The guest of honor is Harold (Zachary Quinto), who brandishes a wicked wit and a savage smile that cuts deep the whole night through. Sure, things begin with conversation and cocktails, but as the booze flows broodiness emerges. Then, Michael introduces a party game intended to do no good.

Over the course of the party, these gay men get a chance to revel, reveal, and reflect. There are scenes of yearning, tearful confessions, furious debates about love and monogamy, and a smothering dollop of self-loathing. In 1968, such frankness about the inner lives of gay men may have been revolutionary. Trotted out in 2020, some themes still have relevance, but this production feels like an artifact. Its archetypes may have been seminal; presented here they feel shallow. The ensemble strives to bring them to life, though with varying success.

De Jesus is the standout, bringing depth to a character that could be played purely as a swishy stereotype. He offers verve when Emory parties, but when he reflects, de Jesus brews vulnerability with an unapologetic longing. His monologue about a curious crush from his youth proves one of the most moving moments of a film full of speeches. Washington likewise shines in his spotlight scene, transforming before our eyes from the mirthful man to the frightened teen whose first love felt exciting yet fragile. Carver is asked to do little but be the dumb bit of trade, but he brings the warmth of a golden retriever puppy that begs others to afford him kindness, if not respect.

Rannells and Watkins offer a stinging double act, one boisterously withering to the other’s quietly judgmental. The oddness of their characters’ coupling offers a few soft laughs, then a quarrel thundering with raw emotion. Hutchison is given the thankless role of the homophobe who cringes for most of his screentime. Yet he manages to bring a smidge of softness that offers some possible subtext. Meanwhile, Bomer brings an enchanting ease to the party with a warmth that extends to every member. After two seasons of listening to his voice tight with self-loathing and regret in Doom Patrol, it was a delight to watch him play a gay man so relaxed and self-loving.

Where Bomer is nuanced, Parsons is nasal and nattering. With a relentless whine, Parson’s Michael comes off like a soured Paul Lynde, his winsome humor turned acrid. The bitterness makes sense, but the theatricality of his delivery clashes with the casual setting of the apartment. It’s as if Parsons can’t decide if he’s in a film or a play. Or perhaps after years on a sitcom, he can’t find an organic rhythm. His partner in too-muchness is Quinto, who enters as the film’s Grand Dame.

His introduction is treated with fastidious flair, revealing elements of his meticulous fashion before his face. Then, his face is shocking, not because he is Zachary Quinto, strikingly handsome leading man! But because it is splotched with prosthetic scars and a thick paste of makeup that makes him seem in certain light as if he’s wearing a melting Zachary Quinto mask. Another snide speech will explain this look, but it doesn’t make it less visually jarring. Add to this Quinto’s bombastic vocalizations, and Harold becomes a cartoon striding along the uncanny valley. Like Michael, Harold is a “screaming queen” with a cruel tongue, and Quinto delivers every line like the queer-coded Disney villains. Every word is an opportunity for drama, and he won’t miss a single one.

Where Parson’s theatricality grated on me, Quinto’s made me cackle. Perhaps because his was a big choice fully committed, where Parson abruptly lurches from snark to sincerity. Regardless, the effect of the ensemble is a movie that is a mess tonally. The cast is not on the same page, and so each turn feels tortured.

Further frustrating, it’s absolutely clear this was a play. The screenplay, penned by Crowley, offers some silent scenes of these boys outside the apartment to bookend the film, but this does little to pry us out of the apartment’s cloying clutches. Drowning in dialogue, staged mostly in one location, The Boys In the Band feels cramped and recklessly restless. Perhaps its helmer, Broadway director Joe Mantello, didn’t see that as a problem. Maybe he intended the effect to be claustrophobic or immersive, making us another of Michael’s tormented guests. Instead, it’s boring, visually and in the bullying of its characters.

Ultimately, I couldn’t help but compare The Boys In the Band to the TIFF premiere, One Night In Miami. Both films are ’60s-set dramas about emotionally fraught friendships between a group of marginalized men. Both are adapted from plays by their playwrights. Both are set primarily in a hotel room. One was breathtaking, offering complex characterizations in place of stereotypes serving as mouthpieces for conflicting ideologies. One found fluid ways of escaping the room to better explore these relationships and the world in which they are forged and tested. One was thoughtful, profound, and riveting. The other was The Boys In the Band.

The Boys In the Band is now on Netflix.