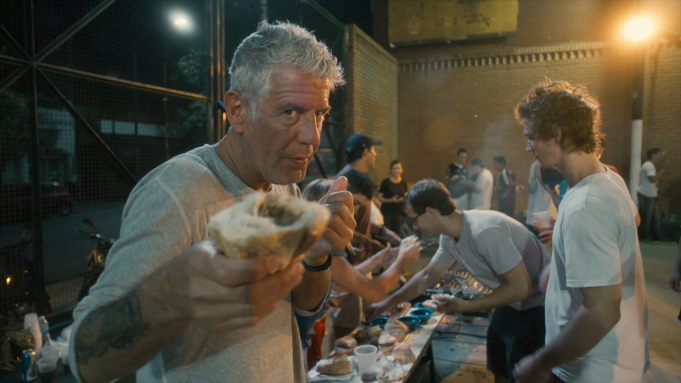 Review: 'Roadrunner: A Film About Anthony Bourdain' May Not Be The Tribute Doc You're Craving

Please be advised: the following review discusses a film in which suicide and mental illness are central components. Proceed with caution if such content may be triggering.

Anthony Bourdain felt like a friend. From the heavy swing of his arms from his broad shoulders, to the low-growl voice edged with a smirk, to the eyes that were at once world-weary and alight with wonder, we felt we knew this man, who allowed us all to vicariously globe-trek and taste the world’s delights. Then, he killed himself. The world mourned a remarkable raconteur, whose writing felt so alive that we thought we knew his soul. How his story was cut so abruptly, so cruelly short was a mystery to many. In Roadrunner: A Film About Anthony Bourdain, the why of Bourdain’s suicide is not the central question. However, his end hangs heavy over all else, an unavoidable cloud, teased early on by Bourdain’s own voiceover, warning, “There’s no happy ending.”

Documentarian Morgan Neville has a knack for unraveling the lives of fascinating famous men, who we think we know, from Orson Welles (They’ll Love Me When I’m Dead) to Mr. Rogers (Won’t You Be My Neighbor?). In his latest, he sits down with the loved ones of the late Bourdain to understand the man beyond the public persona. Among those interviewed are chefs Dave Chang and Éric Ripert, Bourdain’s ex-wife Ottavia Busia, artist David Choe, and crewmembers from his heralded travel series, Anthony Bourdain: No Reservations and Anthony Bourdain: Parts Unknown. Talking head interviews staged against artful backgrounds allow Neville to impose some sense of solemnity and order into this documentary of a life untamed. But Bourdain himself is its disruptor. Employing never-before-seen footage from his long television career, audio excerpts of his books, including his best-selling memoir Kitchen Confidential: Adventures in the Culinary Underbelly, and posts from the late chef’s Instagram account, Neville gives Bourdain a voice from beyond the grave. And that voice refuses to sugarcoat.

Though pulling from familiar sources, Roadrunner is not a rehashing of Bourdain’s autobiographical writing. Instead, Neville plumbs the depths of what know—or think we know—about the introvert who became the world’s favorite wild friend. We loved Bourdain for taking the risks we feared to take. We relished his traveling, his wit, his insatiable urge to taste, touch, and explore. In his writing, he was frank about his issues with addiction. His friends recount how he often joked about death, and plenty of outtakes from Parts Unknown attest to that. It’s honestly jarring how much of Bourdain’s life is captured on camera casually. Alongside stories of his kindness, his passion, his humor, these friends share anecdotes about his obsessions, his insecurities, and how his sharp tongue could sting you are your core.

If you want a fawning portrait of a chef turned Mark Twain of the modern age, look elsewhere. Neville isn’t interested in such juvenile simplicity. He knows all too well that’d be a disservice to Bourdain, who grappled with his inner demons in life and in his work. Alternately, Roadrunner doesn’t pretend to fully capture 61 years of a life full of dizzying highs and gutting lows. Its focus is Bourdain’s adulthood, racing from his wiry youth as a braggart chef with a book deal to a TV personality fumbling into a public persona, to a world-famous star, who still felt like a failure. This in-between is at times jolting and unsatisfying. Which, perhaps, is unavoidable.

The final act of Roadrunner becomes focused on the why of Bourdain’s suicide. His friends and family have ushered us through his rise to fame, his marriages, his joy in becoming a dad, his fear at not living up to what others expected of him. Then, things turn dark. Tears are shed. Grimaces set into place, and we begin to scour the details of his last days like tea leaves, desperate for an explanation that can give us closure.

Roadrunner is blunt about who is to blame, setting up Bourdain’s romance with controversial filmmaker Asia Argento as the beginning of his end. While some interviewees will argue that—for the record—Bourdain alone made the decision to end his life, most of his friends featured are quick to lay the blame on her. They sift through the footage from the couples’ haphazard Parts Unknown shoots. They point to tabloid stories of betrayal, then dissect his social media posts for clues. To be frank, it’s a convincing argument. However, that is in part because Argento is not featured in the doc. No counter-argument is firmly offered. Plus, isn’t it easy to blame someone less beloved than to recognize mental illness has no respect for fame, fortune, talent, or being globally adored?

Roadrunner becomes reminiscent of another doc from Tribeca 2021, The Kids, which delves into the disturbing behind-the-scenes behavior of Larry Clark on the 1995 indie hit Kids. In the latter doc, director Eddie Martin hands over the narrative to his interviewees, never challenging their speculations, even when they essentially accuse Clark of homicide by negligence. In both films, these final sections are unsettling, watching people grapple with the aftermath of suicide. We hear much emotional reasoning, which is absolutely understandable. However, unrecognized is how such reasoning may feel real and righteous, but may be neither. There’s just too much mystery in the human heart to know for certain why some stories don’t get happy endings. We clutch at clumsy answers, because rage may not make sense, but it feels better than grief.

Neville gives room for this anger to be expressed, but without surrendering the documentary to speculation. Instead, we’re reminded to consider not just Bourdain’s last days, but the decades before, and how they shaped him, for better and worse. Then, we’re shown an unconventional tribute to this lost wanderer.

B-roll of his friends and family living on without him, but with his memory strong. We see them embracing their kids, relishing a moment of comradery and conversation, and even defacing a memorial mural of Bourdain. They remember with the pain of his suicide still stinging, but more radiant is the memory of his love, of his irreverence, of his verve.

Through weaving together stories clamorous, comical, and ugly with footage mundane, moving, and ominous, Roadrunner crafts a compelling and complicated portrait of Anthony Bourdain. Some might crave something cleaner, brighter, more cathartic. But such an offering would be a disservice to an artist who pushed the envelope, pulled at our heartstrings, and demanded we meet him wherever he roamed.

Following its premiere at Tribeca Festival 2021, Roadrunner: A Film About Anthony Bourdain will open in theaters on July 16.