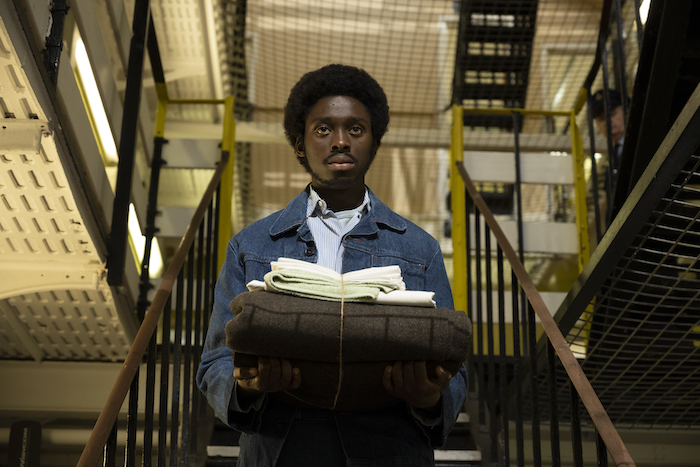 Review: Reflective 'Small Axe: Alex Wheatle' Works Better as a Piece of a Puzzle than a Standalone

If there is one word that thematically embodies the entirety of Steve McQueen’s Small Axe film anthology series, it is perhaps “identity.” The unprecedented project explores Black British identity in a way unlike anything this reviewer has ever seen on screen before, taking an experience that has been largely ignored by movies to date and placing it center stage. Mangrove explores the identity of the British West Indian community through the Mangrove restaurant, and systemic efforts to undermine, damage, and even downright destroy that community. Lovers Rock, focusing on a house party, feels like the more joyful side of the same coin. Red, White and Blue, meanwhile, reflects upon Black British identity through tensions in a father-son relationship.

It’s fitting that Alex Wheatle, the fourth Small Axe installment, is the only one named after its principal character, as it’s also the one installment that really focuses on identity at the level of the individual. Wheatle, an author who first arrived in the British literary scene in 1999 with his debut novel Brixton Rock, is known for much of his writing pulling from his experience growing up in group homes in Brixton. In the film, he’s introduced as an 18-year-old just starting a six-month prison sentence for his involvement in the 1981 Brixton uprising who insists, when pressed, “I got no frickin’ story.” The film, co-authored by McQueen and Alastair Siddons, tracks Alex’s journey to discovering his own story, largely through series of extended flashbacks and his relationship with cellmate Simeon (Robbie Gee), a bibliophilic Rasta who takes it upon himself to be a mentor figure to Alex whether Alex wants it or not.

After being handed over to social services as a young child, Alex grows up in a series of facilities with caretakers that range from neglectful to downright abusive. Before ending up in Brixton as a teen, Alex environs are overwhelmingly white, leaving him with no connection to his community or guidance on how to operate as a Black boy in an oppressively white world.

Alex comes across as an overwhelmingly isolated figure throughout the film—the lonely-in-a-crowded-room type who finds himself on the outside looking in no matter where he goes, and no matter who he happens to be around. From his early years being ostracized in overwhelmingly white environments to his adolescence in Brixton, the odd man out thanks to his manner of speaking and very different upbringing, Alex often seems more achingly lonely when sharing the screen than on his lonesome. Neighbor Dennis (Jonathan Jules) takes pity on Alex and plays the Henry Higgins to Alex’s Eliza Doolittle, so to speak, but it doesn’t feel quite right to call it a friendship—there’s an emotional distance to all the relationships Alex has over the course of the film; he almost feels like a perpetual stranger. While newcomer Sheyi Cole gives an excellent performance as Alex, his quiet and overwhelmingly reserved persona throughout the film does at times bestow an opacity that, unfortunately, comes across rather inevitably as somewhat flat.

While all Small Axe entries can be viewed independently, Alex Wheatle presents far more interesting food for thought as part of the collective than it does out of context. In the context of Small Axe, in many ways a portrait of a community, the film presents an intriguing meditation on individual identity from the perspective of a young man who, due to the circumstances of his upbringing, is faced with a particular estrangement from both himself and this community, while still being a member of it. Taken out of context, while still an impressively polished and well-made film (like all of McQueen’s work to date—the man has yet to falter), Alex Wheatle starts to feel a little overly familiar: a Bildungsroman starring an orphan on a journey of self-discovery, shellacked with the glean of destiny one inevitably finds in any biopic about the early life of someone en route to greatness.

While all the films in McQueen’s anthology can be watched independently, this one easily loses the most by being taken out of context. As one thread in the Small Axe tapestry, Alex Wheatle brings a perspective to the table that interplays with other installments in a fascinating way; independently, it loses much of the context that presents the most interesting food for thought.