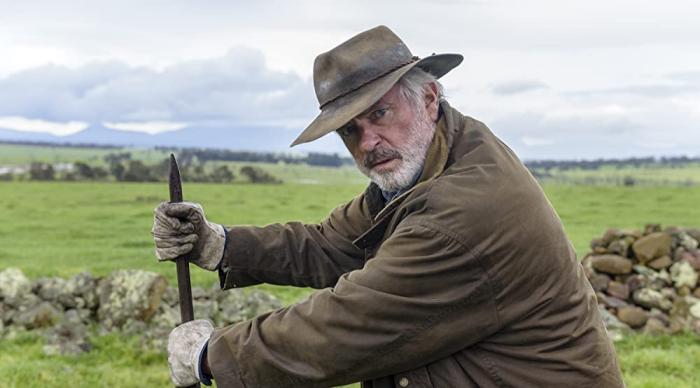 When he’s not playing the lovable, outdoorsy grump in movies like Jurassic Park and Hunt For The Wilderpeople, internationally adored actor Sam Neill can be found on his own farm, playing with pigs, chatting with cattle, and mocking his cock, Michael Fassbender. Perhaps knowing this is why all I needed to know about Rams was: Sam Neill and sheep. I didn’t know what the plot was. I was unaware of the Cannes Film Festival winning Icelandic inspiration. You had me at Sam Neill and sheep. And I regret nothing.

Directed by Jeremy Sims, this Australian adaptation stars Neill as Colin Grimurson, a dedicated farmer who is part of a long tradition of raising award-winning rams, prized as breeding stock. The adapted script by Jules Duncan swiftly establishes the rural community of Mount Barker as one full of colorful characters and grumbling conflict. Jokes about Merinos plays like Sideways’ memorable Merlot slam, where even a newbie to the subject walks away cackling in disdain. Breed-busting aside, these farmers are a friendly lot, save for Les Grimurson (Michael Caton), a cantankerous old drunk, who happens to be Colin’s brother. The pair have been estranged for decades, yet share farmland and a sheep-herding dog, whose name is even grounds for argument.

Their gnarly resentments knit into a routine of passive aggression, as they traverse their lands and care for sheep while dedicatedly ignoring each other. Even when facing off in an annual competition for best ram, they determinedly dodge any interaction. However, this simmering sibling rivalry will come to a boil when Colin discovers his brother’s herd is infected with a dangerous and contagious illness.

Here’s where the plucky premise of grumpy old men in picturesque pastures takes a dark turn. The authorities decide all the town’s sheep must be destroyed to prevent this disease from raging out of control. The farmers will be financially compensated for their loss, but a check won’t make up for a bloodline eradicated. The Grimursons have been breeding pristine rams for generations, a tradition that by-the-book Colin respect so deeply he will break all the rules by hiding a wee flock in his own home.

This silly scenario allows for winsome scenes of wacky home renovation and Neill gently chiding sheep that drink from his bathtub and haughtily trot through his living room. Woven into this fun is a subplot of a possible romance with the spirited veterinarian (Miranda Richardson) and the potential for reconciliation with his drunkard brother. For once, the two are not in competition for their father’s love, the town’s respect, or the highest stud fees. Together, they want only to preserve their family legacy.

Sims offers a playful vibe to Colin’s ruse, which Neill leans into with a comic pluck. Plus, it’s a dizzying joy just to watch him sincerely tell sheep, “You are beautiful.” The ensemble cast runs with this spirit, bringing energy and an eager warmth that invites audiences to feel like one of the flock. Sentimentality swells as Rams charges to a climax that could be worrisome. I mean, Icelandic movies don’t trend toward Hollywood happy endings. The original film takes a grim path for its final act, which involves a brutal blizzard. Its Aussie remake switches ice for fire, rolling out a catastrophe-centered climax that tests the brothers’ mettle amid a familiar landscape set aflame. But fret not, because this Rams aims for feel-good over faithful, delivering a finale that’s suitably sweet.

If you’re searching for something fun and heartwarming, Rams is a winner. However, a word of warning: this cheeky tale of rule-breaking rebels might feel a bit less charming in a time of worldwide pandemic. Sure, Colin is confident that his flock is no danger to others. Because he’s Sam Neill we want to trust him over the scrawny pencil pusher handing out checks as he pinches his nose to fend off the pungent scent of the farm. However, the romanticizing of such arrogance and selfishness amid a time of community crisis is less cute when our news and social media feeds are full of anti-maskers caterwauling about how their desires trump communal safety. So, in short, your mileage on this point may well vary.

Rams opens in theater and on VOD on February 5.

← The Best Way To Prepare For Super Bowl Weekend Is To Watch Tom Brady Read Mean Tweets | Will Smith and Kevin Hart Will Star in a 'Planes, Trains, and Automobiles' Remake →