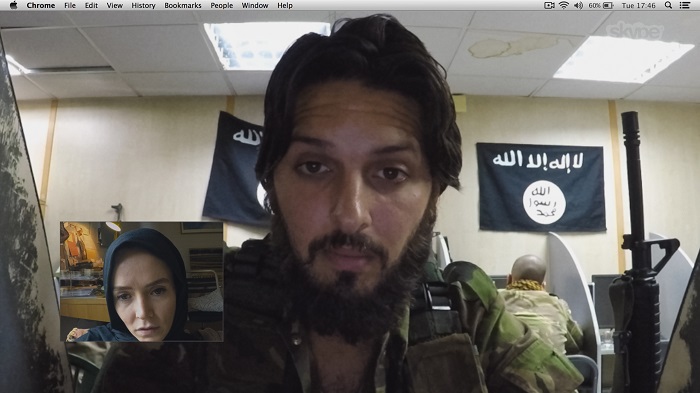 Review: ‘Profile’ Exhausts the Screen-Only Approach, and Is Also Exhausting

Congratulations to Profile for wearing me down. I expected the latest from director Timur Bekmambetov, who produced previous screen-only movies Unfriended and Searching, to inspire in me a rant against Orientalism, racism, and prejudice against Middle Easterners in cinema. Another movie about terrorists? Please. But Profile is such a tedious, ineffective whiff of a film that instead, I was just bored. Bemused. Exhausted!

Inspired by the true story of a French journalist who went undercover online to befriend, and then infiltrate, ISIS recruiters trying to encourage Muslims to travel to Syria and join the fight over that country, Profile plays out entirely on the laptop screen of the film’s version of that character. We flicker between Facebook, messaging and video apps, and YouTube, as in Searching. We watch the film’s two primary characters—journalist and ISIS fighter—figuratively dance around each other. Is either of them really telling the truth about who they are? What is it about a computer screen that so readily encourages and allows us to pretend to be different people?

Profile doesn’t really engage with the latter question at all, instead focusing on a thriller-only approach that, frankly, is increasingly unimpactful. The film is told entirely from the perspective of freelance journalist Amy (Valene Kane), who after covering the story of a white British girl converting to Islam, traveling from the UK to Syria, and marrying a member of ISIS, decides to pose as one of these would-be wives. By pretending to be a 19-year-old recent convert named Melody Nelson, Amy hopes to ensnare one of these ISIS recruiters, capture him on video discussing his tactics, and learn more about the girls who have already traveled over there.

At least, I think that’s what Amy wants her story to be, because she is a terrible journalist, barely organized and incredibly underprepared. I understand the appeal of procrastination! I do it myself! But Amy doesn’t even begin this elaborate investigation until what is presented as her deadline day, and even typing that out gave me full-body anxiety. She doesn’t seem to have done any research on ISIS, Syria, or Islam before she begins crafting a Facebook account purposefully meant to attract ISIS attention, sending off a spate of friend requests to Muslims and liking every beheading video she sees. (I am not sure if her lack of preparation is for our benefit—to make us experience everything related to ISIS for the first time, as Amy does? If so, all that approach accomplished was making me think Amy is bad at her job.) And because ISIS has a noticeable social media presence, within five minutes, Amy is chatting with Bilel (Shazad Latif), a member of ISIS who came to them by way of London, where he was born and grew up.

Amy as Melody, with a headscarf on, her tattoo covered up, and her dog locked in another room, begins chatting with Bilel, who is usually carrying a rifle, riding in a pickup with other ISIS members, or sitting in a sort of computer lab at an ISIS outpost. They talk about their childhoods, and what ISIS stands for, and what drew Melody to Islam, and Profile wants us to go along with the idea that Amy’s anxiety about her assignment would eventually give way to attraction to Bilel. It doesn’t work. 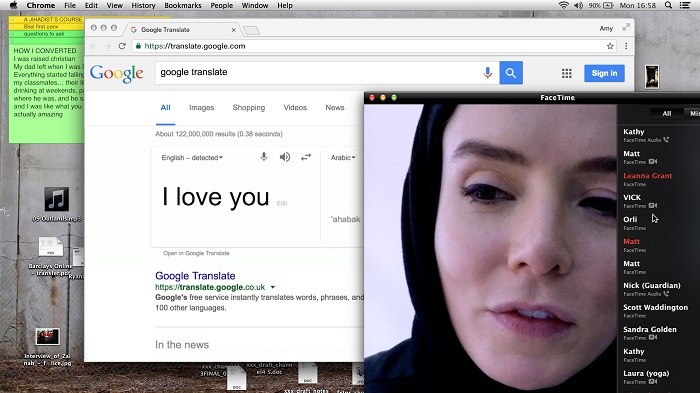 When the entirety of these characters’ interactions play out on choppy connections, with Amy’s screen constantly interrupted by messages from her friends or chats from her real-life boyfriend, you’ll never buy a real bond between the two. And because of the constraints of the screen-only format, the conversations between Amy and Bilel are presented as separate video files that she’s editing together, meaning that all the stuff in between these interactions is absent. How does Amy feel about her conversations with Bilel minutes, hours, or days after? The character is denied interiority time and time again. Every time her editor checks in, it’s for a frantic, seconds-only phone call that barely addresses the scope of the assignment. Would someone really be so hands-off with a reporter embedding themselves in a terrorist group? And although the film is intentionally messy in blurring the boundaries between Amy’s work as a journalist and Melody’s desire to be loved, it’s difficult to feel any empathy toward Amy when she acts in such ludicrous ways. A nearly 30-year-old woman, who already has a boyfriend, swayed into a relationship with a terrorist after two weeks in which he calls her “baby” a few times and teaches her how to cook curry? That’s all it takes? Get it together, Amy!

Plus, yes: Profile also has your typical “Oh, of course they did that” stuff about its Middle Eastern characters. Lou (Amir Rahimzadeh), the tech guy for the news outlet Amy works for, is Syrian, which causes Amy to retreat into some fairly predictable racism: “They are all fucking connected!” she screams, convinced that Lou or his mother will sell her out to jihadists. Does she ever seem to progress past that prejudice? Not really. When Amy learns that one of the girls who joined ISIS has been stoned to death, she reads tribute messages from her relatives and friends saying “We will always remember you like this,” emphasizing her fresh-faced, rosy-cheeked whiteness. The movie gives humanity to this girl in a way it doesn’t for Middle Eastern women. And while ISIS deserves all the hatred, negativity, and criticism you can make aim at it, Profile never really drives home the danger of the group. The film can’t decide if it’s a cautionary tale about social media, a cautionary tale about Islamic extremism, or a cautionary tale about being a sloppy journalist, but whatever it is, the film fails to transcend its central gimmick.

Profile opens in theaters as of May 14.