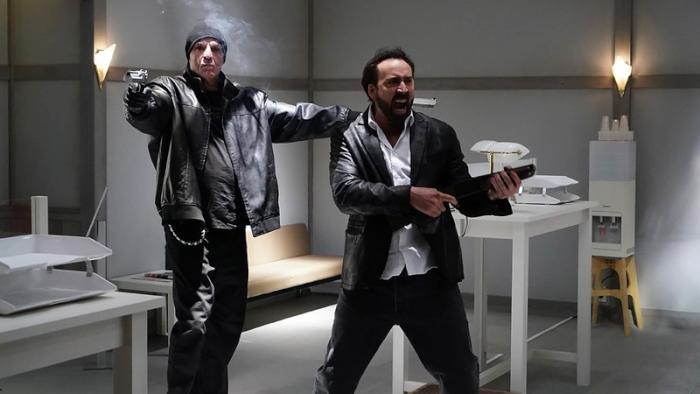 Review: 'Prisoners of the Ghostland' Makes Nicolas Cage (And Us) a Prisoner of His Schtick

Can somebody please write Nicolas Cage a nice, calm, quiet role? Something where he doesn’t have to scream and cackle while running in his underwear in between sprinklers of arterial sprays? I’ll admit I’ve never been his biggest fan but at this point we’ve so turned him into a shtick, an eye-bugging brand, that I’ve begun to feel a little bad for him. Especially after watching Sion Sono’s post-apocalyptic snooze-fest Prisoners of the Ghostland, in which Cage’s heart clearly is not in the running of this psycho rigamarole any damn longer. His performance, like the film itself, is DOA.

It’s not for lack of everybody trying—Ghostland starts with the kitchen sink and then works up from there; it throws so much at the screen my eyes filed a police report. Cage plays Hero, a name which is ironic I suppose, seeing as how the film begins with him and his Frankenstein-sized bank-robbing buddy Psycho (Nick Cassavetes)—and yes, two paragraphs in I’m already exhausted by having to write things like “Psycho (Nick Cassavetes)”—killing a bunch of innocent bystanders, including an adorable little boy who offers them some bubblegum.

We flash back and forth around this incident in time so we can exhaustively get every single one of the details that we have not been given any reason whatsoever to care about, but on the opposite side of it is this: Hero finds himself imprisoned and Psycho finds himself dead. Or sort of dead. It’s complicated and nonsensical, not necessarily in that order.

Cut to what is I guess supposed to be a decade later—I say “I guess” because Cage looks exactly the same at every point in the picture, as the look of what we have come to know as “Nicolas Cage” is a thing that’s become so stepped outside of time there’s no longer any changing it; it is the river running, the sound of wind through trees, a single tear tracing down a wolf’s cheek. But somebody says some time has passed, Hero’s been in prison in his underwear for awhile, and now an American cowboy character called The Governor (Bill Moseley) says Hero can gain his freedom if he’ll track down a renegade geisha named Bernice (the always welcome Sofia Boutella).

Just as with the 2018’s Mandy and Cage’s co-star Andrea Riseborough, the introduction of a kick-ass still-trying talent like Boutella fatally (for the film) offers up a whiff of What Might Have Been. What if Mandy had actually been about Mandy? I saw a better movie in my head once I latched onto the thought of it, and again here today I see a better movie version of Ghostland that focuses on Bernice and Boutella. Her character, after all, actually has some real stakes. The worst Hero has to deal with is a leather-jumpsuit loaded with explosives pressed against his nards that the Governor has forced him to wear for this quest, and I just can’t bring myself to care that much about Nicolas Cage’s junk. I just am incapable of that ask.

Anyway—long sigh—Hero goes to this Ghostland place, which is basically a stretch of desert Thunderdome with a bunch of “artfully” arranged store-mannequins posed about, to retrieve this Bernice person, and to gain his freedom. There he finds a big clock and a singing Greek-like chorus and a prison-bus full of nuclear zombies and everybody is dressed like the Wheelers from Return to Oz and it’s all so wildly, desperately tedious. Most of all it appears, for Nicolas Cage, who can hardly scream his lines about testicles the way that these lines about testicles deserve to be screamed. And so, like this film’s circular structure, like the shape of a testicle, I circle this review back to its beginning: can somebody do Cage a damn favor and let him play a human being? For all of our sakes? We’re tired, man.

Prisoners of the Ghostland premiered at Sundance 2021.

← Amazing Scenes From English Parish Council Meeting Go Viral | Review: You're Not Ready For The Awfulness Of 'The Reckoning' →