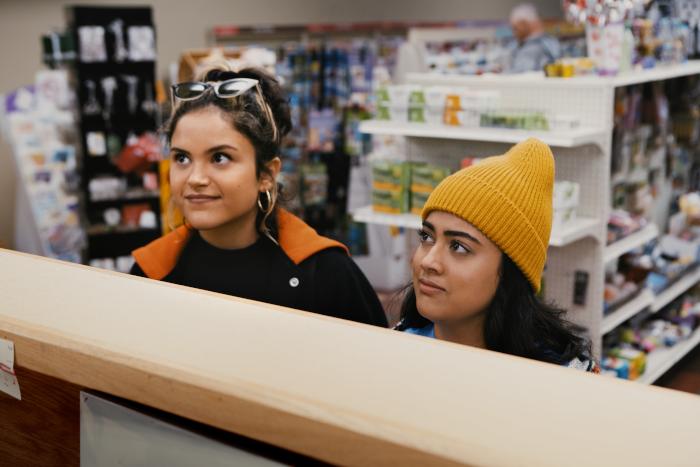 Review: "Plan B" Should Be Your Plan A For This Weekend

It didn’t occur to me last year while watching Eliza Hittman’s moving and tremendously acted teen abortion drama Never Rarely Sometimes Always to think, “What if, but with laughs?” But this weekend on Hulu we’re getting the answer to that unasked “What if” with actor-turned-director Natalie Morales’ debut film Plan B. This teen abortion comedy sees two girls going on a road trip after an accident with a condom—and the dopey boy attached to it—to score some of that sweet Morning After Pill action. It turns out that “Never Rarely Sometimes Always + Laughs” equals not a bad idea at all!

The “B” in Plan B could also stand for Booksmart, because there’s no way around thinking of Olivia Wilde’s 2019 picture here either, what with its “two smart teen girls go wild” plot. Sunny (Kuhoo Verma) & Lupe (Victoria Moroles), an outsider capsule of two adrift in a sea of the typical cliques, channel the same deep wells of unwavering support and affection for one another that was also a wildly endearing staple of Kaitlyn Dever & Beanie Feldstein’s bond in that earlier film. As manic as their teen panic might get, you’re never too worried these girls will find their way back into the platonically loving arms of one another by their madcap story’s end, a maelstrom of hugs spilling stuffed animals off of twin mattresses, symbols of life’s big lessons in early miniature forms.

However, thread and threat of seriousness do run deeper with Plan B . So, if you’re a codger like me, your mind might keep wandering back even farther. Maybe you’ll picture Jennifer Jason Leigh’s abortion storyline in Fast Times at Ridgemont High, or Olivia Hussey in Black Christmas. The staple of the Pregnancy Threat story-arc in teen movies has its own rich history, one that no doubt has meaning to the majority of teens (and former-teens) for whom such things are a threat. I’ll admit, as a former teenaged homosexual, this has always been a plot that’s seemed beamed in from another dimension for me. There weren’t a lot of benefits to being—in the famous words of Cher Horowitz—being “same-sex oriented” in the 1990s. But not having to worry about getting anybody pregnant was a definite perk. I assume that remains so for today’s queer youths as well, and so my ultimate point of this tangent is—per usual—“Just be Gay, Everybody.” It’s just better.

I’m not totally off-track with that line of thinking, as Plan B screenwriters Joshua Levy and Prathiksha Srinivasan fold a queer perspective into the central story. Then, unlike every earlier film I just rattled off, this teen comedy stands itself apart by putting two girls of color in its leads. Somehow in 2021, this is still a revolutionary act on its lonesome.

As with real-life, Sunny and Lupe’s teen troubles all seem to spring from the expectations that they have had placed upon them. Sunny has got the burden of her Indian-American mom’s exhaustive educational expectations weighing her down, while Lupe’s pops is a Hispanic preacher-man. One of those Cool Preachers who wears t-shirts, sure, but he’s a self-anointed moral authority all the same.

That’s the real meat of the teen story when you get down to it. Whether you’re a Shark or a Jet, a Capulet or a Montague, whether you’re a Brain or a Basket Case, a Criminal, Princess, Jock, Heather, Mean Girl, Weinerdog, or just a Nerd getting your Revenge, teen stories are about us bristling at our definitions, trying to grab the brightly colored gel pen and write the damn stories of ourselves, for ourselves, by ourselves. We re-do it every generation, digging deeper and harder into the wood of the school desks, scratching out the earlier versions while trying to come up with a right, better way.

Plan B feels to me, in its silly vulgar and goofy little way, like the true stumbling onto a good path. My first thought upon the feel-better strike of its final credits was, “Gee golly damn the kids are alright.”

I’ll admit we’re not exactly handing them a world in its prime, but watching Sonny and Lupe figure out their sh*t gave me a small measure of peace for an embattled future. Some things seem at least headed in the right direction. Adjusting the margins of our stories to make room for ones like Plan B is a big chunk of the answer, and we shouldn’t rest until everybody has gotten their own gross-out gag involving a toilet splash and a horrified reaction shot looking down.

Plan B premieres on May 28 on Hulu.