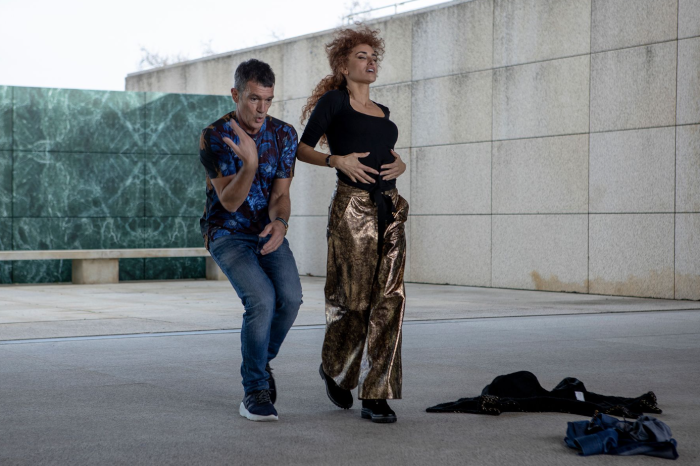 If there’s one common denominator as to what plagues serious-minded low-budget filmmakers, it seems to be the subject of resources—there is never enough money, there is never enough time, and they’re always chasing the both of those things like a cartoon character chasing the lit fuse on a stick of dynamite. So what would happen if both of those problems were voila, erased like so much nothingness? Like, say what if an investor angel in the form of an art-less billionaire at the end of his life decided to suddenly dump unlimited funding toward the prospect of leaving something vaguely meaningful behind—something in the form of a movie? That’s the deliciously sneering proposition at the heart of Official Competition, Argentinian director Mariano Cohn and Gastón Duprat’s scathingly funny satire of the international art-house scene—think of it as The Square for cineastes, but only if you then immediately poke yourself straight in the ribs for calling something, “The Square for cineastes.”

Humberto Suárez (José Luis Gómez), the art-less billionaire in question, first thinks of building a bridge to slap his name on, legacy speaking. But a second later, with no rhyme at all, he decides that no—it should be a film instead! Humberto doesn’t seem to know anything about movies, or to care anything about movies—you could maybe sort of see the flashbulbs of celebrity adulation popping off in his eyes as he stares into space in that moment, if you squint hard enough, but that could just as likely be gas.

Anyway, freshly enraptured with his sudden impulse, Humberto demands from his personal assistant that they find only “the best”—find him the “best” director, find him the “best” most serious story. Just find him the best of everything, whatever the hell that means. If his personal assistant had been a big Adam Sandler fan we’d be in for a very different movie! But no his first thought is of the avant-garde Palme d’Or winning director Lola Cuevas (a never funnier Penelope Cruz), whose previous credits include the pitch-perfect bullshit-sounding trilogy of films titled Haze, The Void, and my personal favorite The Inverted Rain. Still, it isn’t too surprising this woman would leave a memorable mark once we see what a immense shadow she casts in any room, and I don’t only mean hair-wise. But we should probably start with that hair—fire-red curls piled up like the mane of a lion that got too close to an electrified fence, that hair seems to grow larger from scene to scene; by film’s end she’s nearly a sentient wig with legs. A fashionable Cousin It for the Volpi Cup set. It’s truly the sight-gag that keeps on giving.

Director done and purchased, Humberto & Co. then plop down another heap of money for the rights to a Nobel-prize winning book that nobody but Lola herself seems to have read, although the Cliff’s Notes version about brother-rivals that she quickly summarizes is so hilariously indifferent toward specifics that we’re left to wonder if she has read it either. Lola’s fascination seems more geared toward the casting gimmick she has in mind for the brothers at the story’s center—she wants them to be played by two equal but oppositional cultural forces. Spare no expense! One will be played by an international movie-star named Félix Rivero, who is in Official Competition played by international movie star Antonio Banderas, having an absolute blast skewering his own wayward stabs at Hollywood and no doubt several of the big time movie-stars that he met along that way. And the other brother will be played by an enormously respected serious thespian named Iván Torres, who is in turn played by the real-life serious thespian Oscar Martínez. Coincidentally Martínez won the Volpi Cup for Best Actor in Venice for the 2016 film called The Distinguished Citizen, which was whaddya-know also directed by these same directors here. This is a movie that enjoys its self-referential stabs! It’s Scream 3 for the cineaste set! (Okay I will now stop saying “cineaste.”)

And so the war between Art and Commerce gains its preening figure-heads, and from there on out Official Competition holds nothing back from its non-stop mockery of the immense egos peacocking at every which end. Lola demands a vast period of rehearsal time, and Humberto gives the threesome unfettered run of a hilariously enormous Gehry-esque convention-center wherein to do it. Reminiscent of the immaculate architectural spaces of Bertolucci’s The Conformist—only scalped of any sense of history, time, place, and meaning—we then watch Lola, Félix, and Iván attempt to strain toward the intimacy required to make this brotherly bond seem genuine, all while screaming at each other from the opposite ends of an airplane hangar. Endless resources quickly become a farcical chasm from which no actual art can escape. A money-pit-like quicksand of anything goes endless possibility, it seems in turn impossible that any movie could ever be birthed from these ridiculous circumstances. And that’s even before Lola busts out the wood-chipper.

Indeed the absurd intimacy of the film-making process seems the truest, fiercest bullseye of Cohn and Duprat’s aim—that anything ever comes out of the tossing of piles of emotionally stunted narcissists and egomaniacs into each other’s unwieldy orbits for several weeks and then asking them to reveal their deepest truest selves for the sake of cinematic immortality is itself a special sort of outrageous yet age-old buffoonery. One that sometimes pays off, but even more often ends up in disaster. Litigious, emotional, violent gibberish disaster. And given the entire world with which to play it only seems reasonable that, like an insult spoken into a winding vacuum tube, that shit’s only gonna come back to bite us in the ass eventually. Thankfully Official Competition makes of it all a riotous snack.


← The Falklands Malvinas War: 40 Years Of A War That Meant Nothing And Meant Everything | Salvaging 'The Night Sky' →