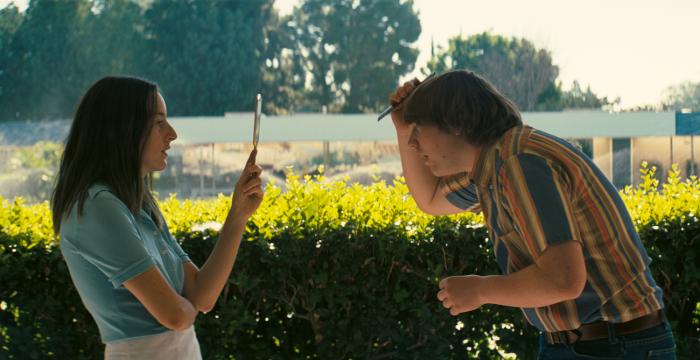 Review: Paul Thomas Anderson's Messy And Chaotic 'Licorice Pizza' Is The Stuff Of Life Itself

It always seems strange to me whenever Paul Thomas Anderson’s films get branded with the “Hangout Movie” label, as I find myself typically having at least three to five panic attacks inside of every one of them. But perhaps that’s what makes him one of the truest poets of the right now? To “hangout” now—and I speak of my own personal definition but perhaps you’ll feel me—is to fluctuate through waves of anxiety, a churning push-pull of apocalyptic ideas and the indispensable lulls in between. It seems no mistake that the artist PTA’s most closely aligned with is the band Radiohead, who’ve been surveying this glitchy landscape for the past two decades—one of my favorite bits of any music ever comes three quarters of the way into their song “How To Disappear Completely” as Jonny Greenwood’s strings build to a chaotic crescendo, and Thom Yorke’s voice at its uppermost wail splits through the sound, the prettiest damned thing you ever did hear. Paul Thomas Anderson films are all seeming to strive for this exact sensation—he starts his worlds spinning sickly fast and then begs, pleads, for a still moment.

His big ensemble pieces have always aimed for these bullseyes in between the tumult—think on the “Wise Up” sequence in Magnolia where the clouds part and the sprawling cast finds a blip of solace in their unbeknownst sing-along. But I think this grasping for communion is showcased nowhere better than in his romances, of which I’d call Licorice Pizza, out everywhere on Christmas Day, the third of a trilogy alongside previous masterpieces Punch-Drunk Love and Phantom Thread. His characters aren’t ever perfect—it’s more likely they’re the creators of the whirlwinds which bedevil them—but they are seeking, whether they realize it or not, an installment of perfection. And it’s especially in PTA’s romances that we find him plotting out the right puzzle pieces with which a semblance of anti-mania can be amassed—another lopsided person who fits, basically. Where their weirdnesses are complimentary, and for a second the storm abates. An exquisite note floating out of the mayhem.

Here Cooper Hoffman (whose late lamented father and frequent PTA collaborator Philip Seymour you can see plainly in the rosy puff of cheeks) plays Gary Valentine, a sweeter junior version of the many deluded strivers Anderson’s accumulated over the years. Instead of a porn career or a trip to Hawaii via pudding cup the fifteen-year-old Gary’s just grifting for the thrill at this point—he’s still in high school and seems generally indifferent to the money he makes and loses in equal measure. It’s the chase, embedded in his genes from birth, it seems. That blind confidence, stumbling into dark rooms and making light spark up (dangerous, fast) where-ever he goes, is what immediately catches the eye of Alana (Alana Haim, giving real heft to the term “revelation” here) when they meet-cute at a school photo day she’s chaperoning for the photographer. Her gig is offering mirrors to the teenagers so they can look their best, which is the Gary-equivalent of tossing red meat into a lion’s cage—this is a boy who’s never said no to a mirror in his fifteen fast years of life.

Turns out he fancies himself a bit of an actor… well technically he fancies himself a a bit of an everything but he starts out with actor. And as with all his claims there’s just enough not-bullshit in it to intrigue Alana out from the momentary torpor of her mid-20s existence. Although the film doesn’t feel the need to underline this, moving as quick as Gary does from set-piece to set-piece, he no doubt reminds her of slightly-more-innocent self when she had stupidly solid ideas of where she was going—Alana’s a little lost when we meet her, and Gary makes it incredibly easy for her to tag along for a tumble of dumb adventures, putting her malaise firmly into the back-seat. We’ve all had these people who we’ve allowed to swallow us up for awhile, hoping some of their confidence drools off onto us and maybe sticks in the process.

And that’s what Licorice Pizza is—one mad scheme of Gary’s after another as Alana tries on snatched bits of personality for size, seeing what fits. Before long she’s trying to become an actor too, finding herself dragged into a truly unruly side-plot involving Sean Penn doing a sleazy riff on an over-the-hill William Holden, with drunken motorcycle jumps and a cackling Tom Waits running up and down a country club golf field. (This acting lark of Alana’s also gifts us with the film’s greatest cameo, PTA’s cameo queen Harriet Sansom Harris playing a chaotic casting director through a masterclass of hilariously off-center line-readings.) But this seeming looseness of Licorice Pizza, this so-called “Hangout Movie” with plot threads that roll up and down and up and down and up and down these Hollywood Hills until they sputter, quite spectacularly, out of gas, are the point—their seeming aimlessness a symptom of the cause and a cause of the effect.

We might be hanging out with these folks, following them around through a disjointed staccato accumulation of movements, but the lack of structure, like Gary’s Peanuts-like absentee parents, is what gives these people their forms. Anderson found his perfect metaphor with one of Gary’s mid-film schemes becoming a waterbed mattress salesman by mail—the pan-flash kitsch of that product, representing the idea of sex as seen from the most naive P.O.V. imaginable, popular for exactly fifteen seconds until falling apart under the weight of a truly absurd side-effect. Alana’s just looking for that perfect float feel, just for one second, a space-age plastic squishing her up and out of the noise, even as the dreaded hiss of a leak seems more than certain. Licorice Pizza, a breathless dazzle, gifts them and us our exquisite moment of air poised between peaks; our butts perfectly suspended like astronauts before the rollercoaster crashes down. I lived for it.