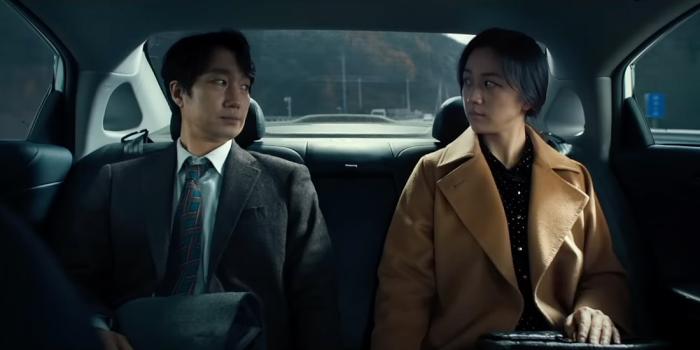 Hae-jun (Park Hae-il) is a detective committed, or perhaps addicted to, his job. He barely sees his wife, who lives in Ipo while he works in Busan, and doesn’t seem to have much of a life outside of the force. A new case lands on his desk when a mountain climber is found dead after falling from his favorite peak. It seems to have all the signs of an unfortunate accident or even a suicide. So, why is Hae-jun’s partner so suspicious of the man’s younger Chinese wife, Seo-rae (Tang Wei)? She’s gorgeous, an outsider to the country who beguiles Hae-jun. It seems unthinkable to him that she could ever be a murder, yet the further he is drawn into her hypnotic web, the more her story becomes complicated and potentially dangerous for him.

Park Chan-wook is one of the most well-known figures in South Korean cinema. He kicked open the doors of the country’s new wave of film in the early 2000s with Oldboy, a fierce drama of violence, trauma, and squid-eating that felt like the most invigorating breath of fresh air. While other directors came through the door, most notably the multi-Oscar winner Bong Joon-ho, Park remained at the top of the pile, at least for English speakers looking inward. He seemed capable of anything, his work offering a pinpoint precise balance of pitch-black humor, merciless brutality, and multi-layered plotting chock full of twists and secrets. The bar is high for Park with his first film in six years, especially when he has bona fide masterpieces like Oldboy and The Handmaiden in his arsenal. That Decision to Leave is merely excellent rather than perfect is a testament to his impeccable talents and creative consistency.

The comparisons to Hitchcock have been made in many reviews for Decision to Leave, particularly Vertigo (although I think the vibes are far more Marnie than anything else.) It feels like a rite-of-passage for a director ready to show their mettle to delve into the realm of Hitch, whether it’s Rian Johnson’s twisty high school noir Brick or Gus van Sant’s semi-trolling shot-for-shot remake of Psycho. Park, however, is aiming for something as twisty as classic Hitchcock but with a far more glacial feel. This is a filmmaker who has always reached for the stars in terms of his technical craft, bringing a subtle touch to even the most blood-stained of tales. What could feel like a frenetic twist is executed with a deftness that always catches the viewer off-guard, even with a set-up that could have easily been a tawdry ’90s erotic thriller (honestly, Park would still knock that out of the park.)

What has always made Park stand out among a crowded field of filmmakers is his near-balletic skills with tone. You can go from guffawing at Hae-joon as he tries to shave while driving to an investigation then be taken in by the growing passion between him and Seo-rae then be stunned by a new revelation in the murder case. Each shift into a new genre, often within seconds of one another, comes with such a naturalness that it makes you wonder if it really is so easy to achieve as a storyteller (it’s SO not.) It feels completely cohesive for those moments of quiet to bookmark set-pieces of astonishing inventiveness, and the biggest one in Decision to Leave, involving a mountain and a deadline, is easily one of Park’s greatest achievements as a director. Just when you think you’re on solid ground, he forces you back into the unexpected.

Tang Wei gives a startling performance as the widow with opaque intentions. Her seeming lack of emotion over her husband’s death leaves her open to suspicions but it also seems clear that she’s the smartest person in the room at any given time. Wei brings an evident rawness to Seo-rae, an outsider in her adopted country whose language skills she constantly worries about, yet there’s clearly a spine of iron in this beautiful woman. You never doubt that she could stand toe to toe with anyone who doubts her. Hopefully awards season will pay notice to Wei’s work, although their exhausting bias towards performances not in the English language will be tough to overcome. There’s obvious irony to this because so much of Wei’s performance is rooted in how she is forced to juggle languages. Armed with a surprisingly efficient translator on her phone, she speaks Chinese to let Hae-jun have a more accurate statement of her emotions. Of course, neither of them is transparent with one another, and language shifts show this in action.

It’s impossible to discuss the second half of Decision to Leave without spoilers so I won’t get into the nitty-gritty, but it does offer a fascinating haunted mirror of sorts to everything that precedes it. Hae-jun and Seo-rae are forced into another mystery that throws his steadfast beliefs to the wayside. His emotional and moral conflict makes for some of the film’s most tangled scenes, the crumbling of a man who has nothing to his name but his fight for justice who has now lost that safe port in the storm. If the first half of the film is a traditional thriller, the second half is the dissection of how such stories actually work. It’s pure Park, so effortlessly labyrinthine that the familiarity of this thriller plot barely registers as something we’ve seen a million times before.

It has to come to an end eventually, as all cat-and-mouse chases do, but Decision to Leave is such an enveloping experience that you almost wish it didn’t. You want to see how far Park can take this, how much he can continue to tease out the conventions of a well-worn genre and make it entirely his own. It’s easy to be taken in by this film, and here’s hoping it offers Director Park his long-awaited chance to be an Oscar nominee. Then again, it’s not his fault the Academy takes so long to play catch-up with an undisputed master of the field.

Decision to Leave is in theaters now.