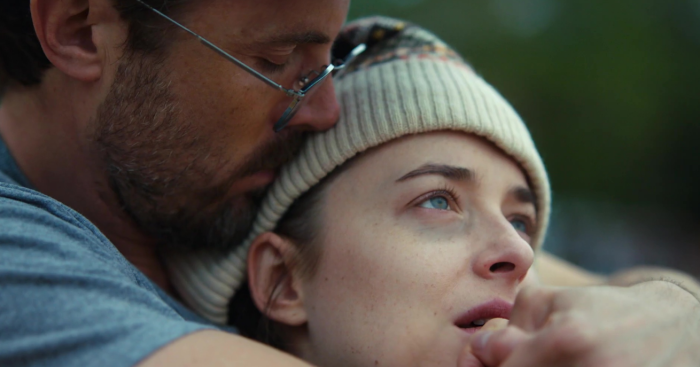 Review: 'Our Friend' Is Terrified Of Its Own Source Material

In 2015, journalist Matthew Teague published a piece in Esquire that detailed the worst time in his life. Titled ‘The Friend,’ the article told the heartbreaking story of his beloved wife Nicole Teague’s diagnosis of terminal cancer, and how their best friend, Dane, became an indispensable addition to their family. He became the much-needed third pillar of the Teague clan, stepping in when they needed him the most, especially as Nicole’s illness became more aggressive and destructive. It is a startling piece of writing, an emotionally honest and utterly unflinching examination of death that sought to wholly strip away any lingering romantic notions surrounding the idea of dying young and beautiful. The details that stick in the imagination of the reader the longest are the almost furious assertions of how ‘grotesque’ dying is. ‘It’s undignified,’ Teague writes. ‘No one ever told me the truth about it, not once.’ Many of us aren’t told the truth until it’s too late and we’re terrifyingly unprepared for its cruelty.

Director Gabriela Cowperthwaite, (Blackfish) had a tough task in adapting Teague’s story into a traditional cinematic narrative. Is it even possible to make a movie out of this that doesn’t sanitize those horrid details or revel in them to the point of voyeuristic glee?

She and screenwriter Brad Inglesby decided that the best way to tackle this is to employ a non-linear narrative. It opens with Matt (Casey Affleck) and Nicole (Dakota Johnson) determining the most appropriate and unpatronizing way to tell their daughters that their mother is going to die. Then, the film jumps around, seemingly at random to capture the fully layered and emotionally crucial dynamic between this couple and the friend, Dane (Jason Segel). Matt is an ambitious journalist whose work gets in the way of his family. Nicole is a vivacious figure of the community, a musical theater nerd and optimistic figure with big plans. Dane is an unambitious sweetheart who feels rudderless in his own life independent of the Teagues. Indeed, it’s Dane who benefits the most from this narrative shift, allowing him room to be more than the saintly assistant during Nicole’s time of need. We see him desperate to be there for Nicole and Matt but also feel quietly satisfied that he gets to be a part of this family. It’s a tough role for Segel to play a man seemingly so selfless that it’s hard to believe he truly exists. He struggles with the tonal shifts, reverting to guileless man-child more than once.

The side-effect of this narrative shake-up is that the entire point of the story becomes diluted. Moments that should pack a great emotional punch have their sting removed. We’re told that the family’s large circle of friends decreases as the end nears but never see it. It becomes hard to keep up with where we are on the calendar, despite the film’s sporadic title cards and the changing wigs on Johnson’s head. We don’t see the impact of Nicole’s diagnosis in full effect and the result is that her struggle is overlooked.

Hollywood struggles with illness. It flinches away from the disgusting reality of something like ovarian cancer and reduces the details to a bald cap and pale lipstick. Our Friend falls into similar storytelling safety nets. In one scene, Nicole laments how unattractive she’s gotten since the terminal diagnosis, and it feels particularly insulting since all the audience sees is the highly attractive Dakota Johnson looking as good as ever, albeit a wee bit paler than usual. The degrading impact of this disease is boiled down to some chic pixie-cut wigs and gentle bags under her eyes. A terminal cancer patient hasn’t glowed this much with beauty since Rachel Weisz in The Fountain.

Therein lies the real issue with Our Friend. It’s terrified of its own source material. Teague didn’t want the reader to walk away from his piece feeling lied to about death, yet Cowperthwaite does just that. The disheartening timidity on display here feels antithetical to Teague’s heart-rending honesty. I understand why the film would choose not to go into the stomach-churning details of Nicole’s illness that the Esquire piece is so candid about, including descriptions of undigested food escaping from wounds in her stomach. Yet the shyness of this approach feels at odds with Cowperthwaite’s attempts at shaky-cam kitchen-sink realism.

Every cancer movie cliche is invoked, often in seriously misjudged ways. Teague’s piece explains the ways that Nicole’s mood swings and deliriums, feverish side-effects of the pain and medication, often made her a cruel and unrecognizable figure to be around. He even tried to hide from her, too afraid to deal with the venom of his beloved wife crumbling into nothingness. We see this in one scene in Our Friend, and it’s scored to peppy guitar music as if Mumford and Sons turned up for a few minutes. The music overall is cheaply utilized for this attempt at poignancy.

Teague writes of how he expected dying to look: ‘People hold hands and exchange glances to acknowledge how profound the moment is just before a doctor checks for a pulse and announces, “It’s done.”’ Then, he describes how Nicole actually died. It’s the climax of sorts to his objective and yet another reminder that death is simultaneously more mundane and more soul-sucking than any movie could ever portray. Our Friend shows Nicole’s death in the Hollywood manner. It put on the kid-gloves rather than tell the truth.

Our Friend didn’t need to be Amour but this was a story that deserved far more than the lost nerve of these filmmakers and the derivative cowardice of a culture at large that hides our worst fears and leaves us unequipped for the truth. Matthew Teague talked to The New York Times about how surreal and disappointing it was for him to see the negative reviews of the movie based on his life. I can sympathize with that, but I also find it hard to swallow the cheapness of Our Friend. Cancer is not peppy or gracious. It doesn’t allow you to walk gently into that good night surrounded by a heavenly glow. It didn’t do that for Nicole Teague.

Our Friend will be released on-demand and in selected theaters on January 22.

← We Need to Criticize Joe Biden When He Deserves It | 'The Marksman' Review: Meat and Irish Potatoes →