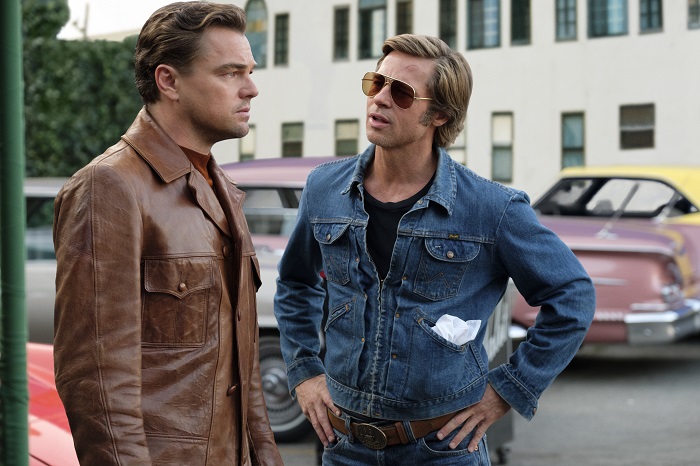 Review: ‘Once Upon a Time … in Hollywood’ is a Glitzy, Melancholy, and Self-Aware Gaze Backward From Quentin Tarantino

As its title suggests, Once Upon a Time … in Hollywood is a fairy tale, and filmmaker Quentin Tarantino lays the glamour on thick in what could arguably be his 10th film, depending on how you count Kill Bill Volumes 1 and 2 and whether you include Death Proof. In OUATIH, it’s 1960s California, and it’s gorgeous and sunny all the time. Everyone is fashionable and stylish. Movie theaters are abundant, their neon marquees coming alive at dusk each night.

And it is all, Tarantino seems to argue in OUATIH, a fantasy that won’t last—that was already decaying from the inside out. A glittering, glimmering vision that its participants tried to guard fiercely against interlopers or intruders, the “hippie assholes” and “hippie weirdos” whose opinions about women and sex and the Vietnam War were irritating and annoying and downright offensive to our heroes, the white men increasingly unsure of their cultural dominance. Does Tarantino engineer the film so that we root for our protagonists, men who drink too much, who happen to be morally ambiguous, who are possibly villainous? Of course he does, as he did in varying degrees in The Hateful Eight and Django Unchained and Inglourious Basterds and Kill Bill. Nearly every character, male or female, in those films killed, and whatever their motivations were, they still did it, and we still cheered.

The burden is on us: Once we stop cheering, what is our internal struggle? Are the “heroes” actually good people, in whatever our definition of that may be? And is Tarantino aligning himself with his very protagonists in arguing that their beliefs are always, unequivocally, 100% right? I don’t think Tarantino does that all the time, and I certainly don’t think he does that in OUATIH. Leonardo DiCaprio’s Rick Dalton is an alcoholic who is drinking away his talent, who blames everyone around him for his snowballing irrelevancy. Like all white actors of a certain time and place, Rick’s refuge is in the Western, the genre soaked in the blood of Native American and Mexican foes. Brad Pitt’s Cliff Booth is a stuntman with a checkered past who is capable of both great heroics and absurd smugness, who is so convinced of his own advantage (both physical and moral) that he injects himself into situations that he only fucks up. These two men are aging out of this industry, and all they have each is each other.

Tarantino is interested in how much badness we’ll tolerate from his characters, how much violence we’ll go along with, how much narcissism we’ll accept. Only one person is fully good in OUATIH, and Tarantino pays homage to Sharon Tate in a way that ties her legacy to the promise California used to hold. Margot Robbie is ethereal and effervescent here, every bit a contrast to Rick and Cliff. These are men who assume that others will be immediately in awe of their performances and their talent; Robbie’s Tate, rather, regards her work with pride but waits for the reactions of others. She doesn’t assume people will love her, but she’s willing to earn it. Her whole future awaits.

I suppose at some point I should talk about the plot of OUATIH, so here we go. The film begins in February 1969, as Dalton’s time on the popular cowboy series Bounty Law is wrapping up on NBC. In film, Dalton is suave, confident, earthily handsome; in reality, he’s twitchy, insecure, stuttering. He blinks a little too much, he has bad posture. And the man is a compulsive drinker, responsible for so many DUIs that his onetime stuntman Cliff has to drive him around everywhere. Cliff used to do all of Rick’s stunts, but he’s been increasingly blackballed by the industry, so he drives Rick to and from work, fixes random things around his house, and pumps him up when Rick is feeling down. They occupy very different parts of this world—Rick’s midcentury mansion high up on Cielo Drive feels years and years away from Cliff’s cramped trailer behind a drive-in theater in Van Nuys—but they share a similar outlook, and that is one primarily fueled by a sense of superiority with a noticeable amount of shame and regret mixed in.

OUATIH tracks Cliff and Rick’s time together on those February days but also follows their diverging paths, which bring them into contact with a variety of recognizable figures and cultural elements from 1969. Rick is Sharon Tate and Roman Polanski (Rafal Zawierucha)’s next-door neighbor, which is our introduction into Sharon’s world, to parties at the Playboy Mansion, and to her work in the Dean Martin film The Wrecking Crew, for which she trained with Bruce Lee (a pitch-perfect Mike Moh, who nails Lee’s mixture of swagger, boisterousness, and hyperbole). Meanwhile, Cliff’s driving around connects him with the Manson Family, which leads him to the legendary Spahn Ranch in a scene full of menace and cross-generational resentment. And by the time OUATIH jumps forward in time 6 months later, Tarantino takes us closer to the infamous event that happened in August 1969 and that seemed to mark the end of a particular era of youthful optimism and intentional rebellion.

Tarantino dials back on his motormouth tendencies with this script, which instead builds in great chunks of meandering time: Cliff feeding his dog, Rick practicing his lines, Sharon packing clothes in a suitcase, Cliff taking off his shirt while fixing a TV antennae, Rick pouring himself a drink, Sharon going to a bookstore. The narrative flow is certainly less action-based than Kill Bill, which transitioned from one exemplary Uma Thurman fight scene to the next, and less dialogue-driven than Inglourious Basterds or The Hateful Eight, which reveled in lengthy exchanges of expletive-filled diatribes. Tarantino is more interested in putting us under the spell of this place, and then incrementally showing us all the cracks in the facade. There’s an allusion to Polanski’s future, which can be read as a reference to his rape of 13-year-old Samantha Gailey (Tarantino, an initial Polanski defender, apologized for that stance in 2018 and did not reach out to Polanski about OUATIH). Our entry into the Manson Family is the charming Margaret Qualley as Pussycat, whose flirtation with Cliff reminds us that those kids were way too young for what would eventually happen to them and what they would be complicit in. And there’s mention of the network wars of the ’60s, and the shady practices we all know Hollywood executives still practice 50 years later.

In that time Tarantino builds of transition and transformation, Robbie’s Sharon is so full of potential and promise that she commands the screen, and Rick and Cliff in particular are so fully realized that they bring to mind other perfect pairings like Ryan Gosling’s Holland March and Russell Crowe’s Jackson Healy in The Nice Guys. Those were two other men who sometimes did bad shit but who were trying to figure out if they could be better, if anything they did even mattered, or if the world around them was changing too quickly for them to keep up. DiCaprio’s self-hatred-fueled rant as Rick in which he berates himself for drinking eight whiskey sours instead of three or four and then messing up a cameo role is a reminder of how funny the actor can be, and he nails the character’s forays into patheticness. And Pitt continues his transformation into Robert Redford, imbuing his character with such slick Rusty Ryan energy that you’ll almost forget he’s possibly responsible for a horrendous crime. I could have spent 3 more hours with these people, with everyone in this damn movie, and I don’t say that just because Costa Ronin from The Americans shows up as Voytek Frykowski with barely any dialogue, and I wanted more for him. Justice for Costa!

There is certainly a worthy argument to be made that cinema is full of these stories, of white men worrying about their own relevance. But there is a self-awareness to this Tarantino film, a sort of grappling with his adoration for genres like the spaghetti Western and for what those films signified—exclusionary Hollywood practices, scripts full of racist and sexist stereotypes—that feels like an admission or confession for the filmmaker. Tarantino is holding a mirror up to himself and to us in OUATIH, wondering why this era is so beloved and so fetishized, and realizing that the part he plays is more complicated than perhaps even he knows. And in that way, OUATIH reminded me of another film I saw this year and adored: Under the Silver Lake, another analysis of Los Angeles as told from the perspective of a man increasingly crazed and paranoid, convinced that the secrets of the universe are found in classic films and in the shadowy corners of Hollywood and frustrated that no one sees what he sees.

OUATIH isn’t conspiracy-minded, like David Robert Mitchell’s film, but it does present a series of similar questions that range from anxious to melancholy to hopeful: Who gets to live well in Hollywood? Who gets forgotten? What performances do we prioritize, and which do we toss aside? What malevolent possibilities are hidden in a beautiful place like this, and what do our reactions to them say about us? What if we could change the past, and what choices would haunt us? Once Upon a Time … in Hollywood may be another somewhat-familiar exploration of the line between justice and revenge that uses explosive violence to secure its status as a fairy tale, but it’s also Tarantino’s most introspective movie in years, a simultaneous consideration of what we lose with the passage of time and what our backward gaze might gain us.