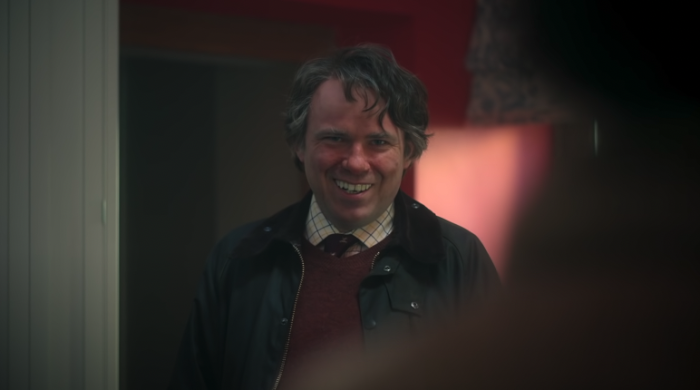 Review: Not All 'Men' But Definitely This F***ing Guy [Spoilers]

A woman approaches a long, dark train tunnel in the wilderness and dares to step inside. She calls out, and smiles as her voice echoes down the passage. She calls again, then again, creating auditory motifs that bounce and blend for her own solitary amusement … until she realizes she isn’t alone. At the far end of the tunnel the silhouette of a man rises to face her and, startled, she flees. And he pursues.

This scene is perfect — a sharply distilled moment of freedom and fear, joy and dread that wordlessly toys with our expectations. It’s an entire story told in two minutes, somehow both elevated and grounded by its simplicity. There’s a reason it earned prominent placement in all the trailers: It’s flat-out haunting. Unfortunately, compared to this scene the rest of Men is about as shallow as the stagnant puddles at the tunnel’s entrance. Nothing but distorted reflections lacking any depth. 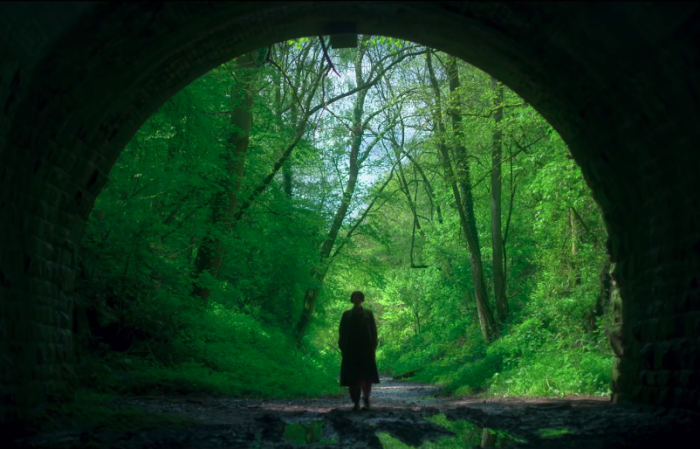 Jessie Buckley (The Lost Daughter) plays Harper, the woman in the tunnel, and the man chasing her is… well, Rory Kinnear I suppose. Because that’s the not-so-secret twist of Men: They’re all played by Rory Kinnear. Harper has fled London to heal from a traumatic event, and the refuge she’s chosen is a 500-year-old rental cottage in a picturesque little village. Kinnear plays Geoffrey, her landlord. He also plays the local vicar, the local police deputy, the bartender, and all the bar patrons and, thanks to some deeply unsettling technical wizardry, a rude little schoolboy too. In a time of warring hashtags, Men is looking #NotAllMen square in the eye and offering up an example of what #YesAllMen might look like. When it’s impossible to tell if a man is dangerous or not, then it’s safer to assume they’re all threats. It’s safer to assume that, deep down, they’re all the same. This is folk horror where the ancient, backward cult is simply the patriarchy — men as a monolith — and standing in opposition is a lone woman trying to live her life. Harper may not recognize or acknowledge that every face she sees is the same, but the audience does.

It’s a nifty enough thought experiment, I suppose. It’d make a great short story, or an episode of The Twilight Zone or even Creepshow. Unfortunately, writer/director Alex Garland (Ex Machina, Devs) doesn’t do the premise any favors by bloating it out into a feature-length allegory laden with allusions that go nowhere (that dandelion seed!). The end result is a film that is frustratingly opaque but at the same time stupid-simple. A flashy sleight of hand, obscuring the fact that there was no trick in the first place. The premise is all there is. It really is that basic.

I wanna talk about the plot in more specifics and look at where the film’s themes ultimately stall out, but for those of you who don’t want to dip into spoilers just yet, let me say that there is plenty to appreciate about Men. The sound design, from frequent Garland collaborators Geoff Barrow and Ben Salisbury, builds on that tunnel scene and uses echoes throughout the whole score, reminding us of that first moment of dread. The harder horror elements — the gore — are unsettlingly grotesque and inventive. The performances are flawless, and hats off to poor Rory Kinnear, who seems to get the doo-doo end of the stick from casting directors. Penny Dreadful made him a monster and then a Nazi, and even Our Flag Means Death made him wear a prosthetic knife through his eye for an entire episode. Here, in addition to playing 90% of the characters, he had to play a dude who walks around fully naked at night with leaves sprouting out of him. Somebody just give that man a cozy robe and a cup of tea, he’s earned it!

In many ways, the film is stunning to behold, and at 100 minutes it isn’t exactly a burden to watch. The problem is that it doesn’t have all that much to say once you squint through the style — at least not to me. The film’s thought experiment never makes it past the first step. The patriarchy is bad? Men manipulate women into doing the emotional heavy-lifting for them, and resent them if they refuse? Women shouldn’t have to shoulder the responsibility of a man’s poor choices? Um, duh? Ultimately this reads like a movie made by men, about men, for men, and the thought experiment really boils down to, “What if we actually are the bad guys?” So I guess I’m just not the audience. Instead of #YesAllMen, this is a movie that just left me thinking, “yes, and?”

My main issue with Men is that it tries to work both symbolically and literally, but fails at either. To begin to unpack it, it’s important to talk about the tragedy in Harper’s past that drove her to that countryside retreat. In flashbacks it’s revealed that she confronted her husband, James (Paapa Essiedu), to discuss divorce, and things escalated. He threatened suicide in order to guilt her, claiming that anything that happens to him from that point on was her responsibility rather than his choice. When he caught her texting her friend to say that James was scaring her, he got angry and hit her. Harper refuses to hear his apology and kicks him out of their flat, and the next thing she sees is James falling through the air outside her window. He had gone to the flat upstairs and forced his way in, and either attempted to climb from their balcony down to Harper’s or… just let go. Harper will never know.

She went out onto the street and discovered his broken body, ankle askew, and arm impaled on a fence post. Those injuries are important because they mirror the exact damage that Kinnear takes in all his many guises during the climax of the film, but let’s put a pin in that for a moment and go back to the naked twig man.

When Harper leaves the woods after that encounter in the tunnel, she realizes she’s been followed by a naked drifter — and when she gets back to her house she discovers him wandering around her garden. She calls the police, and two officers arrive (one a woman, and one Rory Kinnear) to take the man into custody. The woman is sympathetic to the fear Harper must have felt, but later at the bar it’s the male officer that reveals the police had released the stalker as there was no real crime done. The naked man continues to pop up around Harper, but each time he has more cuts on his flesh, almost ceremonial. Then he places a leaf in one cut, and starts sprouting roots. Instead of toxic masculinity, this green man grows more lush and verdant the more afraid Harper is.

In the climax of the film, the green man returns — and so does every other version of Rory Kinnear we’ve seen thus far, taking turns to attack her as she seeks refuge throughout her house. She defends herself when she must, cutting the green man’s arm for example, and a car chase ends with Kinnear walking on a broken ankle. Unlike with James, here Harper is more explicitly the cause of their pain, only… of course she isn’t. It’s their choice to pursue her.

Then it all ends with one version of Kinnear giving graphic birth to the next, and the next, until the monstrous man-mothers eventually birth James. The responsibility for men lies with men. They are the mothers of their own destruction.

So what does it all mean? That’s the rub. Folk horror is often allegorical, but has its own internal logic — we know that the cult may represent an ancient belief structure but it also makes literal sense in the context of the story. Garland offers no such context in Men, and the conflation of James with Kinnear makes it all the more confusing. The movie could easily have been a tale of a backwards village where all men are one man, and Harper could have just found herself there on a working vacation without giving her a (Black) abusive husband. Or instead, Harper could have had a husband who was ALSO Kinnear, or the village could have been filled with James. But when the only man who isn’t THE man is a Black man, it creates a dynamic you can’t help but side-eye — and the film ultimately doesn’t give the audience enough justification to resolve the message. Was it James haunting her all along? Then why did they all look like Kinnear? Or if it was all in Harper’s mind, a delusion of her fighting off the guilt for James’s death that she doesn’t feel, then why were there actual bloodstains when her friend arrives to pick her up?

When James emerges from the gory womb and sits on the couch, Harper joins him while holding a hatchet. She asks him what he wanted from her, and he says something along the lines of, “For you to love me.” Then the film takes a time jump, and we don’t see whether Harper kills James or not, or what happened to the bodies, or anything. I can respect the choice to leave things uncertain — to hang the climax on the reveal of James, rather than the decision Harper makes — but it emphasizes that the movie was never really about Harper at all. She has almost no agency, or rather her choices don’t matter. Men is about the lengths men will go to get what they want from women. It’s not about what women want, and that makes it a fairly shortsighted, hollow experience if I’m being honest.


← Review: Samara Weaving and Eugenio Derbez Give Us A Surprise Winner With 'The Valet' | Davidson, McKinnon, Bryant (and Mooney) Get Proper Send-Offs in a Killer 'SNL' Finale →