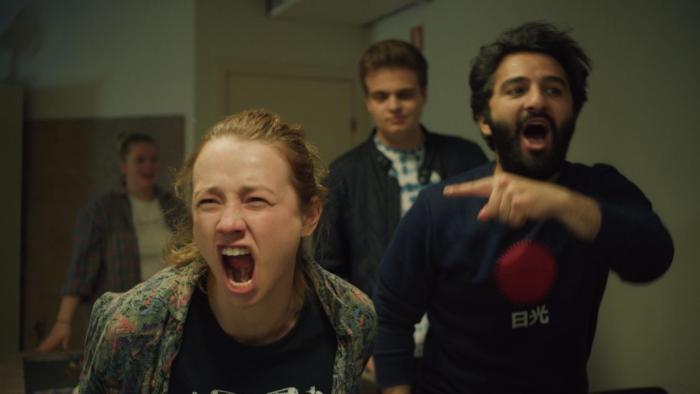 Review: 'Ninjababy' Is Like 'Obvious Child' But Brazenly Bonkers

If you liked Obvious Child, you’ll love Ninjababy. This outrageous Norwegian comedy begins where Jenny Slate left off, then leaps into a story weirder and uniquely rewarding.

Kristine Kujath Thorp stars as 23-year-old Rakel, an aspiring comic book artist who is blithely rumbling through drug trips, boozy nights, and hook-ups with hot guys, some of whom “smell like butter.” (Yum!) That is until a “rotten sneaky ninjababy” crashes the party (and her womb). Like Obvious Child, Ninjababy’s first clue of pregnancy is boob-related and assumed to be the result of a weird-but-hot one-night-stand. Like stand-up comic Donna Stern (Slate), comic-lover Rakel decides maybe she wants to spend more time with the unwitting baby-daddy. But even as romance blossoms, that doesn’t mean she’s going through with this pregnancy.

As a fan of Gillian Robespierre’s abortion-centered rom-com, I wasn’t bothered by the first act similarities. Especially when they set me up for a major surprise: this super stealthy fetus has been chilling in Rakel for far longer than expected. So, he couldn’t be the spawn of the sweet buttery love interest Mos (a cuddly Nader Khademi). So, she’s got to deal with a cringe-worthy f*ckbuddy nicknamed “Dick Jesus.” Making matters worse, Rakel’s too far along for an abortion. Now, she’s scrambling to find a home for the ninjababy she does not want.

Rather than a rom-com, Ninjababy becomes a comedy-of-errors as Rakel blunders through what to do, with her due date functioning as a ticking clock. Should she pawn him off on the boneheaded bio-dad? Should she give him up for adoption? Maybe he could go to a friend who has been struggling with infertility? Rakel careens down each of these possibilities with the grace of a drunken moose, resulting in deeply awkward and hilarious scenarios. And all the while, she’s being plagued by the titular fetus. He appears as an animated doodle, a scribbled baby with a black stripe of a mask, who follows her around and mercilessly mocks her plans. Why is she such a disaster? Why is his daddy Dick Jesus? Why can’t she just give him to Angelina Jolie?

Essentially, Rakel’s vivid imagination takes a Prevenge turn, funneling her insecurities and darkest fears into the voice of her unborn child. But this take is more mirthful than murdery. As the due date approaches, Rakel reluctantly bonds with the kid, which pushes her to make tough choices about what’s best—for her and ninjababy.

With a smirk and a sparkle in her eye, Thorp weaves these bits of tenderness and outrageousness together seamlessly. Under Yngvild Sve Flikke’s direction, she paints Rakel as a mess, but a lovable mess. A sizzling script by the Flikke, Johan Fasting, and Inga Sætre fills Rakel’s world with colorful characters like the a ride-or-die roommate (Tora Christine Dietrichson), the aikido instructor with a heart of gold, and…Dick Jesus. Sorry, they just nailed it. There’s no better description for him, and props to Arthur Berning for playing this douche-canoe with a superb balance of arrogance and obliviousness. He is a pitch-perfect himbo to counter the sensitive and nerdy Mos, as they engage in a wobbly battle for Rakel’s heart. Even as she eyerolls, Thorp has electric chemistry with both, so it’s thrillingly unclear who she will choose and how all this might end! But I’ll give you a hint: this is not an American movie. So, Flikke need not turn hard into a Hollywood happy ending. Instead, this wonderful Norwegian comedy can go for the gusto with something less predictable and far more fitting for her vulnerable yet wild protagonist.

Not being hemmed in by American prudishness, Ninjababy moves beyond the taboos of abortion, pushing further into the uncomfortable zone of being a woman who resolutely does not want children. It tackles sex and drugs with an unapologetic attitude that never shames Rakel for her enjoyment of either. (For those tsk-tsking—she didn’t know she was pregnant when she took ‘shrooms from a stranger. Get over it!) All this makes Ninjababy a fearless comedy that’ll have you screaming with laughter. Ultimately, as it revels in the messiness and brilliance of its heroine, the fantastic and funny film also displays a big throbbing heart, that’ll leave you smiling.

Ninja Baby made its International Premiere at SXSW Online 2021.

← Jessica Walter Has Died at the Age of 80 | Why Does Every Celebrity All of a Sudden Have Their Own Booze Line? →