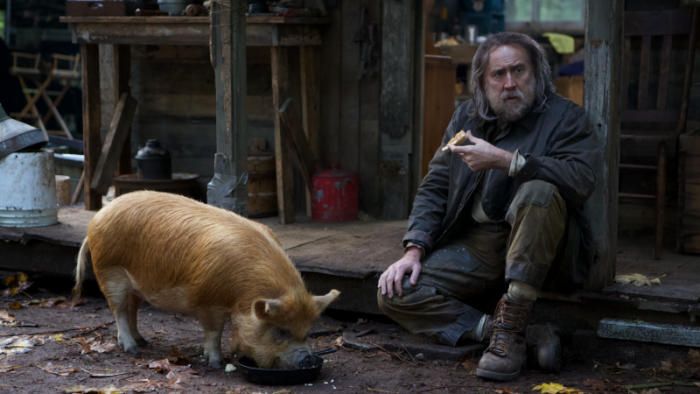 Review: Nicolas Cage's 'Pig' Is Not A 'John Wick' Ripoff; It's Better

A grizzled Nicolas Cage. An adorable pig. A plotline about tracking down the violent criminals who abducted Nic Cage’s adorable pig. It’s understandable that when the promos for Pig first surfaced, many fans excitedly anticipated a John Wick-like tale of pet-lover vengeance. That is not what Pig delivers. Sure, there are some superficial similarities. However, this feature directorial debut from Michael Sarnoski is less flashy but more profound.

Written by Sarnoski and Vanessa Block, Pig begins deep in the woods of the Pacific Northwest, where a disheveled man hunts for truffles with his snuffling pig at his side. Rob (Cage) is not a man of words and is not much for people. This becomes clear when Amir (Nat Wolff), a hotshot truffle salesman shows up at his cabin in a violently yellow sports car. The young man from the city is loud, garrulous, and frankly, rude. He’s quick to suggest Rob get a phone or a shower. Rob hands off the truffles without a word or even a grunt. Once Amir has blasted back toward society, Rob puts on a cassette tape and blissfully cooks a foraged meal for himself and his porcine pal. He talks to the pig, gently and sweetly. Shot in slow-paced scenes, their time together is clearly treasured. Then comes hell.

One night, Rob’s peace is shattered when a couple of crooks break down his cabin’s door, attacks him, and run off with his pig. Bleeding but not broken, Rob walks toward civilization and calls on the only ally he has, Amir. The loudmouth young man is confounded by this crime but reluctantly agrees to drive Rob around on the hunt for his beloved pig. Here’s where there is a whiff of John Wick, as the pet lover at a loss delves into the hidden underbelly of a glossy metropolis. But this time, it’s not assassins in New York City. It’s the restaurant industry of Portland, Oregon. Rob and Amir slip from cramped trailers to dark back alleys to the ruins of a subterranean hotel, where wait staff participate in brutal fight clubs. And that’s just the start.

Midway through this movie, Cage’s famous face is disfigured. His mug a smudge of bruises and beard hair matted with blood. Remarkably, he’ll never clean his face or get a “now he means business” makeover. He wears his damage—not with pride—but with utter apathy, as he walks through a city that remembers his name but aches to forget him. Like Swan Song, Pig becomes a drama about legacy and art. Rob was not always a pungent weirdo in the woods. And as the layers of his story are revealed, Amir develops a grudging respect for the man and even his oddball mission.

Because it’s Cage in the central role, you might anticipate a moment of emotional explosion, where his eyes bug out, his voice squeals with a rattling one-liner, and his mouth twists into a snarl or a sneer. The context of this casting practically promises that, right? Brilliantly, Sarnoski and Cage never give us such a moment. This is a rivetingly subdued performance, which is all the more impactful because of the threat of an explosion. Here, Cage reminds us he is so much more than his over-the-top signature moves. The cinematography from Patrick Scola trusts him even in wide shots. Pivotal emotional moments are shot with obstructed views, a shoulder keeping us from his face or a distant camera making him little more than a piece of furniture in a closed kitchen. His voice rolls like distant thunder, not a threat but a storm passed. All of this speaks to the man Rob was before we met him, painting a story beyond the bounds of the plot. The low-contrast dusky hues of the film are those of mud, leaves, and morning skies, pulling the forest into the urban setting, so that Rob is never out of place, even surrounded by posh and pretentious people.

Instead of jaw-dropping fight scenes, Pig’s confrontations are sharply written conversations, held across fine-dining spreads. The most vicious moment is not one of violence but of a celebrated chef being mercilessly reminded of his failed ambitions and early-career shortcomings. Cage delivers a speech about the glory of making great food, and it feels like a manifesto about his own career, a condemnation of the glamor, marketing, and dialogue, and a celebration of authenticity in art. It’s a quiet scene that is jaw-dropping for its emotional weight, allegorical implication, and—of course—the unflappable presence that is Cage, even toned down, potbellied, covered in mangy hair and fake blood.

In this, Pig is not only a mesmerizing while meditative drama about love and loss. It is also a powerful reminder that Cage is one of the most talented, most captivating movie stars of our time.

Pig opens in theaters on July 16.

← 'Escape From New York' 40th Anniversary Of Everybody Hearing That Snake Plissken Was Dead | 5 Shows After Dark: 'Good Girls' on NBC, 'Top Chef: Amateurs' on Bravo →