Review: Even If You're Truly Desperate to Amuse Your Kids, Netflix’s WWE Marketing Exercise ‘The Main Event’ is Still Rough Going

I am not a wrestling person, and The Main Event is not a movie for non-wrestling people. The only purpose of this movie is to extend WWE’s marketing arm into the Netflix realm. The only purpose! I cannot think of any other reason why The Main Event exists. And if that’s your thing, go off, although you should demand more quality from your cinema. But if you’re looking for a way to amuse your children in these truly desperate times, and you’re not a WWE fan, there are many other ways to entertain them that are not The Main Event. We’re all going wild out here, but please, do not go so wild that you turn to The Main Event for comfort. You won’t find it here! 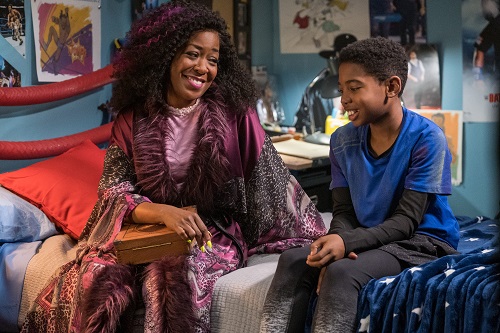 An amalgamation of other classic kid-gets-magic-power narratives, including Like Mike, and more recent growing-up-is-hellish comedies like Little, The Main Event focuses on 11-year-old Leo (Seth Carr). Leo lives with his father Steve (Adam Pally), who works as a mechanic by day and drives for Lyft by night, but barely sees him. Instead, Leo spends more time with his grandmother Denise (Tichina Arnold, of The Last Black Man in San Francisco), who moved in after her daughter, Leo’s mother, abandoned the family for another man. Denise and Leo are intense fans of the WWE, and nearly every element of their relationship is colored by that. They watch Monday Night Raw together. They banter back and forth using wrestling terminology. Leo wears T-shirts featuring specific wrestlers’ faces, and Denise flirts with the T-shirts. It’s a lot, and it’s also somewhat exclusionary to Steve, who isn’t as big of a wrestling fan. But screw Steve! Steve is the most hardworking character in this film, and the dude dealing with his wife’s abandonment and his son’s distance and the thousands of dollars he’s carrying in debt, but Steve isn’t a real WWE fan, and so the movie treats him first like an asshole and then like an afterthought. Fuck off, Steve!

So, anyway. Leo is dealing with his mother’s absence, bullies at school, and the fact that his crush Erica (Momona Tamada) doesn’t really know he exists. The kid feels a little lost. That all changes when, while fleeing the bullies, he sneaks into an open house, makes his way into a room filled with wrestling paraphernalia, and comes upon a metallic blue luchador-style mask. The thing stinks, but hey, it’s wrestling-related! Of course Leo wants it! So he takes it home and puts it on, and … voila! Magical powers! 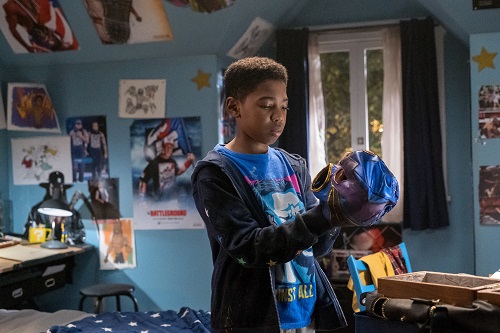 Armed when wearing the mask with physical abilities that basically mimic those of Spider-Man (Leo’s friends even reference the Miles Morales version of the character when realizing what Leo can do), and with a deeper voice and wisecracking wit, Leo decides to enter a contest held by the WWE. The winner, says former Real World castmate turned WWE superstar the Miz, will receive a contract with WWE’s NXT program and $50,000 in winnings. Strangely, no one realizes that the contestant going by the name Kid Chaos is clearly, actually, very obviously a kid wearing a mask, and as Leo begins advancing up the rankings of the competition, he begins to hope that he can really win this thing. But will the fame get to his head? Will his ego hurt his relationships with his friends? Will he eventually realize that his obsession with wrestling is keeping him from really connecting with his father?

To answer my own questions: Yes, the fame gets to Leo’s head, but this movie is impressively disinterested in making its protagonist suffer any consequences. Sure, Leo is a kid—but he also, quite often in The Main Event, acts like a real jerk, and everyone is fine with it! He blows off his friends after making them a series of promises and they forgive him immediately. He puts himself and his family in physical danger through the wrestling competition, but his grandma is OK with it. On the one hand, of course The Main Event is essentially a fantasy. But on the other hand, I was legitimately surprised that this movie makes zero attempt to treat its protagonist with any sort of even-handedness. Wearing this mask is, in and of itself, sort of like cheating! If I were competing against him in this tournament, I’d be pissed! Villainous manager Frankie (played by the ever-lovely Ken Marino; Party Down is on Hulu now, ahem!) has a point when he says that Leo is actually doing something unfair!

And yet The Main Event rejects the normal family-friendly-movie format by refusing to give Leo any moments of self-realization or self-awareness. There is a deeper movie lurking here—one that acknowledges that Leo’s dad’s dire economic situation would make it exceptionally difficult to connect with his kid, and one that makes clear that Leo was surprisingly unaffected by pretending to be another person and benefiting in various ways because of that. Reading over this, I totally understand that I sound like an unhinged narc who is basically yelling, “PUNISH THIS CHILD FOR HAVING DREAMS,” and that’s maybe a bridge too far! Maybe I’ve been stuck inside too long! But while it makes sense that a movie created by WWE would primarily be interested in packing the film full of cameos (including the aforementioned Miz, Kofi Kingston, Mia Yim, Babatunde, Keith Lee, and numerous others), I’m legitimately surprised that The Main Event doesn’t feature any other recognizable elements of a movie of this genre. It took four people to write this thing, and the movie still relies on an exceptionally long fart joke a la Dolittle. Cinema in 2020, man. It’s getting dire out here.

The Main Event started streaming on Netflix on April 10, 2020.


← Ebullient Democrats React After the Wisconsin GOP Trips Over Its Own Feet | Today, We Are All a Frustrated Chris Cuomo; Oh, Actually, That's Not True at All →