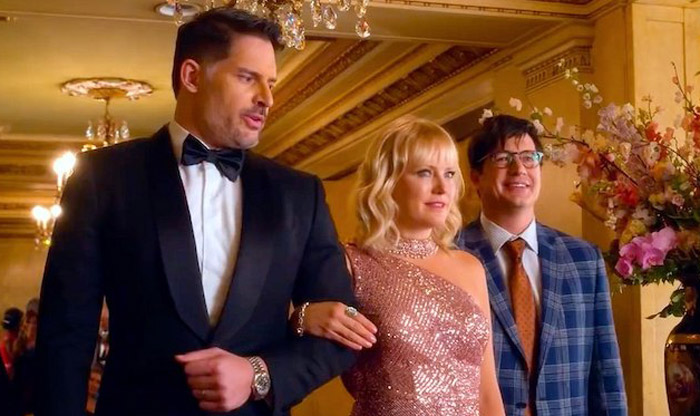 Have you seen Spy Kids? Good. You have no need to watch The Sleepover ever. You could, I suppose, because even if you’ve enjoyed a great burger, juicy and with grill marks and smarty chosen toppings, you’ve likely also eaten a smashed and bland McDonald’s hamburger, because it was convenient and not every meal need be a delight. So, in boredom, you may well turn to Netflix’s family-friendly espionage comedy thinking, “Good enough.” Still, maybe don’t.

Directed by Trish Sie, The Sleepover is a totally tedious comedy that’s premise is: What if two suburban kids found out their housewife mom was once a jewel thief who has been abducted to pull off one last job. OK, it’s not exactly the plot of Spy Kids, because we’ve swapped spy for jewel thief, and a suave spy Daddy for a fumbling pastry chef papa (Ken Marino). Still, once their parents are snatched during a sleepover, outgoing Kevin (Maxwell Simkins) and introverted older sister Clancy (Sadie Stanley) spring into action with a little help from their friends (Lucas Jaye and Cree Cicchino). Carefully uncovering clues their mom dropped before being dragged off, they rush into the night to house parties, boat journeys, underground bunkers, and beyond to try to save their parents from some sneering foes. Meanwhile, momma Margot (Malin Akerman) reconnects with her former flame (Joe Manganiello) to pull off a high-stakes heist. For some reason, the kidnapping crew insists her husband come along on the job, even though his skill set is purely pastry related. Hijinks and fight scenes ensue.

This is the kind of movie you can put on for the kiddos without worry of it warping them. There’s no blood, only cartoonish violence, and no sexual content that might spark uncomfortable conversations. This is harmless fun that feels constructed by the algorithm. There’s the boisterous little brother who is chiefly brash and goofy, gamely throwing on wigs and performing an impromptu dance number in a public restroom. Why? Because did I mention Kevin is outgoing? His foil is his cello-playing teen sister, who harumphs with low-grade “parents just don’t understand” angst, but comes to life when a mystery is afoot. An ounce of edge is brought to the banal of it all thanks to Cicchino, who plays the bold bestie with some solidly snarky zingers. Sprinkled on top is some silly slapstick and general loudness to keep the younger demo interested.

For parents, there’s the B-Plot, which is predominantly a cringing love-triangle thread of kick-butt lady, desired by her muscle-bound Alpha ex and her whiny, bumbling Beta husband. It’s almost funny when the mountain of a man that is Manganiello is introduced as Leo. Brawny, handsome, and undeniably hot, he is instantly the worst-case scenario for the “guy she tells you not to worry about.” Glenn (Marino) is understandably insecure. Unfortunately, this becomes his chief characteristic—beyond strong fingers—for the rest of the film. He sputters lame insults. He nags his wife, while she’s trying to save their lives. And he acts like a repulsive buffoon, spinning from panic to puking in a sequence that will likely make kids squeal and grown-ups groan.

If I wasn’t assigned to review this movie, I wouldn’t have made it past the ten-minute mark. But hey, as a child-free adult, I’m definitely not the intended demo here. I was intrigued because I like Sie’s eye-popping music video work with OK Go, Marino’s masterful skill with awkward humor in Party Down, Akerman’s work on the gone-too-soon sitcom Trophy Wife, and Joe Manganiello. Just everything about Joe Manganiello. Sadly, these tempting ingredients do not add up to anything of substance. The Sleepover is uninspired, noisy, and dumb. It has earnest performances, but a plot that has more contrivances and holes than it does costume changes. There’s energy here yet nothing to get excited about, nothing challenging, fresh, or remotely surprising.

Still, it’s there. Sometimes on even a bland burger is just enough.

The Sleepover is now on Netflix.