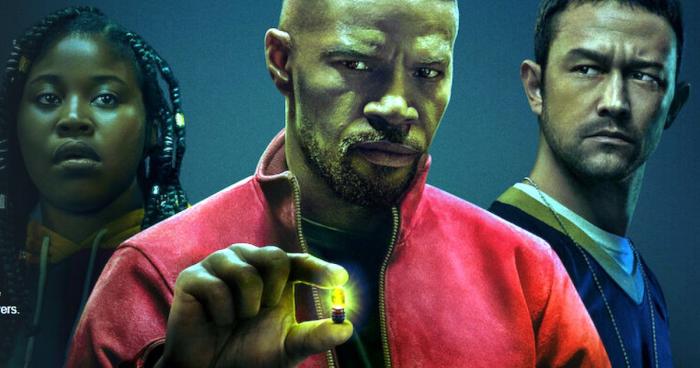 I’m not entirely sure what happened to Mark Neveldine and Brian Taylor, the directing duo behind the Crank films (actually, I do know what happened to them: Jonah Hex and Ghost Rider: Spirit of Vengeance), but Netflix’s latest original, Project Power, may be the closest thing we’ve seen to a Crank movie in over a decade. That’s not a bad thing, mind you, although Project Power doesn’t have the off-kilter energy of Jason Statham or Nic Cage; it has the arguably more talented Jamie Foxx and Joseph Gordon-Levitt, who are great, but they don’t match the action well in Ariel Schulman and Henry Joost’s film.

It is a cool premise, ripe with possibilities (mostly frittered). A mysterious, government-adjacent distributor is offering free “Power” pills to drug dealers in the city of New Orleans. This entity is using the New Orleans’ citizenry as guinea pigs for the drug, which gives the user unpredictable superpowers for five minutes. It’s the “unpredictable powers” that gives Project Power its sense of fun. Users can pop a pill and find out that they are capable of, say, being bulletproof, or turning into a ball of flames, or turning into the Hulk. Some users, however, simply explode Scanners-style on the spot, and that’s fun, too. You never know what you’re going to get each time someone bites into a pill.

There’s a lot of B-movie chaos and joy in the superhero sequences, but they don’t meld well with the more grounded, traditional Liam-Neeson like-thriller that JGL and Jamie Foxx are starring in, along with the phenomenal Dominique Fishback. Fishback plays Robin, an aspiring rapper and Power dealer. JGL plays a NOPD Officer Frank Shaver, one of Robin’s buyers, who also has her back when her customers try and rob her. Though it’s against officer policy, Frank uses Power himself (it makes him bulletproof) to counter the Power-enhanced criminals, although that gets Frank suspended from the force. For reasons that don’t entirely make sense, Frank and Robin eventually fall in with Art (Jamie Foxx) — an original test subject for the drug — as the three search for the main distributor of Power, who also has something very valuable of Art’s.

The superpower-enhanced sequences are a blast, and they’re mostly enough — along with nice performances from Foxx, JGL, Fishback — to allow us to overlook the bad writing and the generic thriller formula. It’s not the blockbuster movie this summer needs (The Old Guard is probably the closest to that), but it is better than a mid-August release date might suggest. It’s fun! It’s just not very good.

← Review: Netflix's 'The Sleepover' Answers The Question: What If 'Spy Kids' But Stupid? | 'Penny Dreadful,' 'The Society,' 'Drunk History' Canceled →