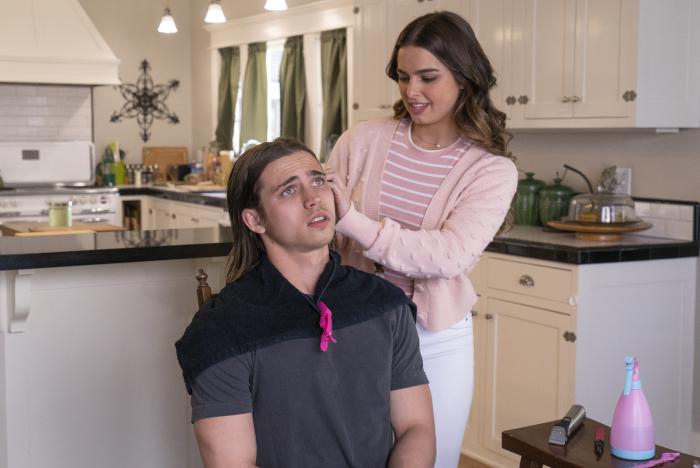 Review: Borne from '90s Nostalgia, Netflix's 'He's All That' Has Shallowness and Product Placement That Are Beyond Satire

Millennials are suckers for nostalgia, so we make the perfect group to mine for remakes. We lionize video stores, obsess over our aged pop idols, and assure you that our teen rom-coms were the best. There’s a reason Al Molina is in that Spider-Man: No Way Home trailer, and it’s not just “the multiverse!” So in the grand tradition of dragging us back into new material by exploiting our love of the old, Netflix has concocted He’s All That, a gender-swapped retelling of the 1999 Pygmalion riff.

Like many ’90s teen films before it, this opens to a long pan across a young woman’s bedroom. A pink-tinted dwelling that looks like an Instagram barfed all over it after eating a Sephora. The room belongs to Padgett Sawyer (Addison Rae), a high schooler who starts her days with a fresh makeup application before addressing her fans online. Padgett is the makeover queen, and her sponsors pay her for it. But when Padgett visits her equally TikTok-friendly beau, Jordan (Peyton Meyer), she discovers him necking with another gal and Padgett’s entire breakdown is live-streamed for the masses. Her reputation and sponsorships (read: her college money) evaporate over night. So, to win back her followers and fame, Padgett takes on a bet to make the biggest loser in the school over into the prom king. Strapping herself to the apparently tragic-looking Cameron Kweller (Tanner Buchanan, Cobra Kai), Addison delivers her most successful makeover yet, falling in love with her mark in the process.

I’d be lying if I said I didn’t enjoy this contemporary take on an old favorite, but it would also be a lie to say it’s successful. Sure, I screeched at Matthew Lillard’s (Brock Hudson in the original version) cameo and enjoyed watching Cameron dress up for a Gatsby party, but the overall movie is pretty hollow and unfunny. She’s All That and movies of its era (10 Things I Hate About You, Can’t Hardly Wait, Get Over It) were never just about the story beats from Shakespeare. They highlighted character growth, glanced toward themes, addressed teen insecurity, and had a thick layer of absurdist comedy. By comparison, He’s All That is so busy making sure the good guys are good that no one really grows or changes beyond getting different clothes. The biggest lesson learned by anyone is to maybe focus less on social media, so they choose to focus on social media just as much but in a different way. *Insert the notorious Insecure “growth” gif here*

It’s directed by Mark Waters, who blessed us with absurdist teen comedies like Mean Girls and Freaky Friday, so it’s hard to say if the missing gags were a style choice, or if I truly just no longer know what makes teens laugh. It’s snot bubbles, I guess. (Truly, there are so many close-ups of the snot bubbles, you’ll beg for mercy.)

Though this flick is for a new generation of youth, it can’t help but nod at the previous one. Addison Rae is, herself, a social media star born on TikTok, and the ring lights and highlight poppin’ are targeting a different crowd than my own. But we’re not to be forgotten. Rachel Leigh Cook and Matthew Lillard show up in the secondary cast, with Lillard delivering my greatest dose of pure joy since use of the word “lockdown” became commonplace. But the reason for the weird hybrid of new and old is hard to decipher. The film follows many of the same beats as the original, like the list-of-losers montage, a grand prom king and queen nomination announcement, and a prom queen speech, but it otherwise doesn’t at all connect with the core of the earlier version.

There’s certainly the “kids today” of it all, as evidenced by the selection of Cameron Kweller. I thought the biggest signal of the generational divide would be the use of TikTok followers as a measure of popularity, but it really came down to an alternative skater boy being picked as the worst of the worst, the type of dude my entire generation would have lined up for.

There are few other things to poke fun at, like a product placement situation that’s beyond satire, and the robbing us of the quirky dad character we deserve. There’s the expected prom dance scene that could really benefit from the cut-aways to story moments we can usually expect because whew, it’s hard to stare at that disaster for that long.

So what do we make of a hollow retelling of a childhood favorite? Not much. He’s All That is much more of a showcase of shiny houses and well-groomed eyebrows than it is a tale of young people coming into their own. While it has a couple fun beats and a striking color palette, this teen flick is a shallow showcasing of dance scenes, musical numbers, and close ups of branded snacks that feel like a book report on Shakespeare by a kid who read the Wikipedia entry and presented it while wearing a lot of lip gloss.

← When Being A Prig Goes Right: Why Are We Still Listening To Kanye? | Justice for 'Selfie,' the John Cho Rom-Com Series Cancelled Way Too Soon →