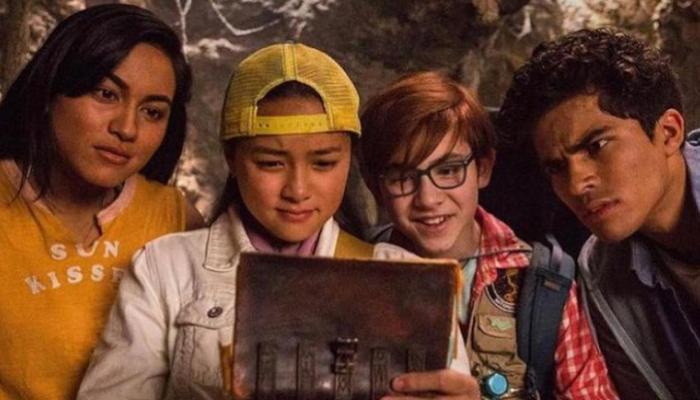 Pilialoha ‘Pii’ Kawena (Kea Pachu) loves nothing more than going on unexpectedly wild geocache adventures through New York City with her best friend. She intends to spend her Summer living the dream at a geocache camp in the Catskills, but those plans are quickly scuppered. Her mother Leilani (Kelly Hu) and her obligatory annoying older brother Ioane (Alex Aiono) drag her to Hawaii to care for their estranged grandfather after a heart attack. It’s not long before Pili discovers something even more thrilling than fake treasure hunts: the real thing in the form of a mysterious journal that could lead to pirate gold. If they find the treasure, then it could solve all of her family’s problems.

Jude Weng’s feature directorial debut shares a lot of DNA with the family adventure capers of the ’80s, most notably The Goonies. It’s delightfully unsubtle in its homages to that movie, right down to a supporting appearance from Data himself, Ke Huy Quan! Frankly, it’s a genre we could do with reviving, and Finding ‘Ohana makes a solid case for doing so. Sure, it treads a lot of familiar territory, but when the formula is this airtight, who cares?

As is befitting a film of this type, we have our quartet of spunky kids: Pili is a spirited tomboy with a sardonic edge whose stubbornness is a simultaneous gift and curse when it comes to adventuring; her new friend Casper (Owen Vaccaro) is the sensitive sidekick with a love for Hawaiian culture and its many creatures (including the potentially murderous ones); Ioane (nicknamed ‘E’) is a teen bro who would rather be anywhere else than with his family; and Casper’s sister Hana (Lindsay Watson) is sensitive but ready to throw down for her family and whenever E tries to woo her. They laugh, they squabble, they grow, and they’re genuinely rather delightful to spend time with. These archetypes work for a reason, and Finding ‘Ohana has enough extra layers to keep them vibrant.

There are some wonderful storytelling flourishes here, including Pili’s retelling of the treasure hunt myth as Drunk History-esque re-enactments that allow comedy favorites like Marc Evan Jackson and Chris Parnell to ham it up. It’s also frequently hilarious, with jokes about Lost, Spam, and Keanu Reeves, all of which help to add depth to the setting beyond a mere list of Hawaii references. Weng is a long-time TV director with credits on shows like The Good Place and Fresh Off the Boat, and she clearly knows how to ail the rhythms and pacing of this kind of comedy. She gives the cast enough room to breathe and finds the quiet moments in-between the gags and rather luscious set-pieces. Of course, every scene of Finding ‘Ohana looks incredible, thanks to its blend of vibrant production design and the natural beauty of Hawaii, which the film takes great pains to emphasize.

At two hours and ten minutes long, Finding ‘Ohana is, like way too many Netflix films, a smidgen too long. Is there some sort of contractual obligation for every original movie on the streaming service to be this length? Although at least here, there are reasons for the length. Weng and screenwriter Christina Strain are just as interested in the family saga as the adventure hijinks. As the title suggests, this is a story about the beauty of family, communal pride, and discovering your roots. Pili and E have little attachment to Hawaiian culture having spent their lives in New York City. A subplot focuses on the fractured relationship between Pili and E’s mother and her own father (played by the legendary Branscombe Richmond), which splintered when she left Hawaii after a tragedy. While the kids go rollicking through caves with skeletons and sing-alongs, the adults wade into some serious tearjerker territory. It’s a testament to Weng and Strain that the movie manages to retain its fun tone without being overwhelmed by its darker themes. Those scenes may not do much for the kids watching but I’m sure some parents will appreciate them. I definitely cried at least once.

Finding ‘Ohana feels like the kind of kids movie we could use more of right now, and it’s an excellent gap in the market for Netflix to plug while Disney doubles down on live-action remakes and reboots of properties that people apparently used to care about. Even this jaded adult appreciated the excitement of an original property like this getting the budget, creative attention, and game cast to shine. While it could have used some narrative tightening, a criticism I feel like I give for literally every Netflix movie I review, it’s easily overlooked here. For all the families out there dealing with an extended case of cabin fever, Finding ‘Ohana is a welcome respite.

Finding ‘Ohana is available to watch on Netflix from Friday January 29.

← 'The Wolf of Wall Street' and GameStop Mashup You've Been Waiting For Is Here | 'Nah No More Banana For Me, Cheers' →