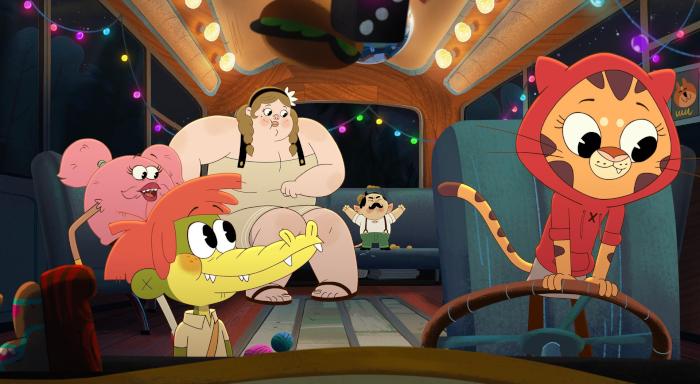 A rising complaint about modern queer cinema centers on how often its stories focus on tragedy: tales of forbidden love, homophobic ostracizing, or crushing coming-out narratives. Such films reflect the trauma endured by many queer people. However, the dominance of such films unintentionally expresses a damaging heteronormative message that to be queer is to be tragic. Our adversity is not all that defines us, which is why a movie like Arlo The Alligator Boy is not only welcomed but groundbreaking.

Co-written and directed by Sanjay and Craig’s Ryan Crego, Arlo The Alligator Boy is an animated fable, filled with music, fun, and characters who are clearly queer-coded. American Idol’s Michael J. Woodard stars as Arlo, an alligator boy raised in a Southern swamp by a kindly hillbilly named Edmée (a sprightly Annie Potts), who found him in a basket on the bayou. However, as a half-human/half-gator, Arlo has never really fit in here. He was urged away from the people puttering by on grand boats, and the animals of the swamp resolutely refused to join in on his sing-alongs. Like so many queer kids before him, Arlo dreams of going to a big city to find a place where he belongs. Specifically, Edmée reveals a clue from the basket that proves he his father lives in New York City. So, the search begins!

Often, this kind of trip is framed as one where queer youth is running from a bad situation. That’s not the case for Arlo. Edmée loves him, and urges warmly, “The world is going to be a better place with you out in it.” Arlo is not running from something, he’s running toward learning more about who he is. There’s a joy in his journey, which infuses every obstacle so that no opposition stings too sharply. For instance, the homophobes who make a living by preaching hate to their minions are lampooned as a pair of gator-hunting hillbillies (a growling Jennifer Coolidge and a goofy Flea), who stalk Arlo in hopes of making him their prime attraction. Coming to his rescue is an unexpected ally named Bertie (singer Mary Lambert).

A wall of a woman with flat brown hair and a literal sack-dress, Bertie does’t look like the bobble-headed princesses of the Disney model. In drop-eyed dialogue, Bertie explains she’s sheepish about her body, because of how others have scorned her for it. However, she’ll learn self-love by seeing herself as Arlo does. Before long, these fast friends tumble into a crew of cuddly outcasts that include a tiger girl (a bubbly Haley Tju), a teeny tiny gnome with a tail (Tony Hale in Dr. Psycho tones), a reverse merman with a fish’s upper half and hairy human legs (a grumbling Brett Gelman), and a gender-non-conforming bright pink ball of hair with mustache and moxie named Furlecia (Queer Eye’s Jonathan Van Ness). Together, they form a chosen family that bustles into New York City with absolute elation.

Crego’s team relishes re-imagining the Big Apple through the eyes of his quirky characters, who giddily run into hair salons, pizzerias, cross walks, drum circles, and park fountains without any New Yorker raising an eyebrow. (Truly the movie’s most true-to life sequence!) At last, it seems these misfits fit. Then, it’s time to go find Arlo’s father (Crazy Ex-Girlfriend’s Vincent Rodriguez III). Here, the story finds its low point, where Arlo is faced with an initial rejection that leads him down a literal dark path and into a sob of a song. However, this kid-focused narrative won’t wallow. Arlo is swiftly reunited with his friends, and readies for a flashy, fashion-centric finale at the Met Gala, because that is essentially a national holiday for the queer community.

Over the past ten years, queer representation in animation has grown, albeit unsteadily. The Legend of Korra delivered a finale which hinted at lesbian love, but didn’t dare let its heroines lip-lock onscreen. Gravity Falls turned a popular gay ship of side characters into canon. Steven Universe and Adventure Time proudly presented queer relationships between major characters. However, feature films have been slow to catch up, offering blink-and-you’ll miss it Pixar moments or squint and you can imagine Elsa and Raya have got girlfriends! Arlo the Alligator Boy doesn’t beat around the bush. This is a story boldly about characters who are coded LGBTQA+ in their tropes and actions. In this case, they don’t fit into the boring standard human OR animal. Their gender expression doesn’t confine them to boy OR girl things. Their bodies are valid, even if they earn sneers from the ignorant or cruel. Simply put, Arlo is a celebration of pride, even if he never explicitly says he’s gay or kisses a boy.

Like Wolfwalkers, Arlo the Alligator Boy doesn’t need to hit these two elements of queerness, chiefly because ARLO IS A KID. Gay kids exist whether or not they know the label grown-ups have for how they feel. Gay kids are gay before they kiss a member of the same gender for the first time, just as straight kids don’t need to kiss a member of another gender to activate. With Korra, the lack of kiss was frustrating because the show dealt in grown characters where romance and kissing was a part of their experience. Arlo doesn’t need a love interest to cement his queerness, because Crego and co-writer Clay Senechal have worked in other signifiers. Besides, this isn’t a story about an alligator boy finding his identity through romance. It’s a story about him finding himself through COMMUNITY, a queer trope that rings true for many. Here it is brought to colorful, outrageous life with vibrant voice performances, florid songs, and unique characters. Still, it’s not all sunshine and rainbows.

Woodard, Lambert and Rodriguez have beautiful singing voices. But the songs themselves aren’t catchy. Much like Netflix’s Over the Moon, they’re fun in the moment but frustratingly forgettable. Some feel like pale imitations from Frozen while others are the kind of pop you’d hear trilling over a grocery store PA. None hit with the gleeful instant familiarity of “Jaja Ding Dong” or the earworm urgency of “Let It Go.”

Still, my greater qualm with Arlo The Alligator Boy is how it underserves the group dynamic that is meant to be its core. From the first trailer, I was ecstatically anticipating how this curious crew would come together. Sadly, it’s in a tumble of three quick sequences that allow little in the way of character development. A proposed heist sets up the promise of an exciting and comedic collaboration. Then, Crego pulls a cheeky joke, where the whole thing goes on offscreen. It’s a funny bit if you’re a grown-up, who can note this budget-saving subversion. But it’s a wasted opportunity that might have showcased this family clicking into place. Instead, a song number between Bertie and Arlo haphazardly folds in the others as back-up dancers. I guess that’s meant to be enough, even though the fish-man ends it by bellowing, “I barely know this lady!”

Simply put, Arlo The Alligator Boy isn’t as pristinely realized as one might dream. Its road trip portion is bumpy, shortcutting the key relationships to race to the father figure stuff. While that section has its virtues, it’s less fun than the group gags. Nonetheless, it’s the all-too-rare movie that gives to kids queer representation with empathy, love, and unrepentant joy. With a smile on his face and a song in his heart, Arlo presents queer kids a path to self-discovery that need not be defined by self-doubt and pain. That on it’s own will make this movie a must-see for a lot of families, chosen or not.

All in all, Arlo The Alligator Boy is something special, offering silliness and songs along with lots of love, hope, and pride.

Arlo The Aligator Boy comes to Netflix on April 16.


← Despite New 'Bombshell' Evidence, Steven Avery Still Guilty as Hell | 'The Nevers' And 'Kung Fu' Premiere, Plus 'The Falcon And The Winter Soldier' On Podjiba! →