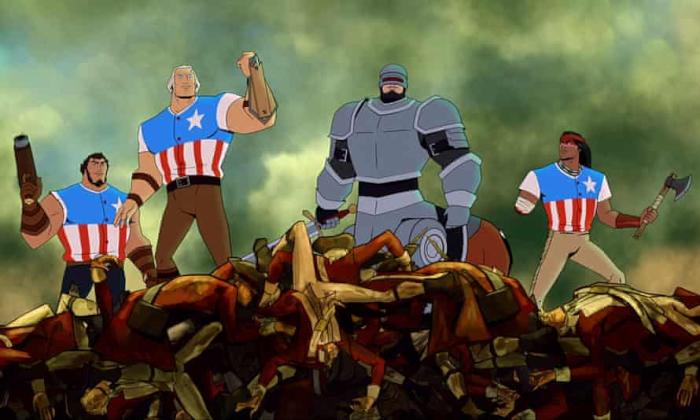 Now on Netflix: 'America: The Motion Picture' is a Very Special Kind of Bad

America: The Motion Picture is the worst movie I’ve watched this year. Y’all, that is a low bar to stumble under. As Amazon Prime reminds me every single time I open it with the “Watch it Again” section: I watched Cosmic Sin. This is somehow worse than Bruce Willis’s scriptless ramble into advocating alien genocide without special effects.

The basic pitch of the movie gives a reasonable expectation of humor: a vulgar and sarcastic retelling of the story of the American Revolution. Take Hamilton, remove the music, and pump it full of Archer. That sounds like quality entertainment to me.
Friends, readers, countrymen: it was not.
I watched all 90 soul-crushing minutes of it. It seemed like at least eight hours. Time ceased to have any meaning whatsoever. I might still be watching it. I will always still be watching it. The elder gods will slouch forth from their slumber and the age of humanity will end in a crimson eclipse and I will still be watching this movie.
It drags, is what I’m saying.
I cannot for the life of me understand how a movie has half the cast of Archer, plus Charming Potato, Jason Mantzoukas, Andy Samberg, and just … what … happened?

The complete and utter failure of the script to provide the most loaded voice cast imaginable anything whatsoever to work with is astonishing. But it’s not enough to say that the script is unfunny and bad. It’s a very special kind of bad that manages to take an entire toolbox of individually promising bits and turn them into a pile of wreckage. No, not a pile of wreckage, because a pile has at least some vague order and logic to it in that it is a distinguishable item composed of other items.

The movie is chock full of bits that in a vacuum sound clever and filled with potential. To wit:

And yet, not one bit of this is even vaguely humorous for even a moment. The Interdimensional Cable episodes of Rick and Morty where they record actors making up impromptu television shows for 22 minutes are more coherent than this movie. That had an actual script, written by a person with a keyboard and words.

They legitimately could have just sat this cast down at microphones with a bunch of the random ideas from the plot outline and had them impromptu riff off each other for a couple of hours, and then animated and edited it and it would have been ten times whatever this steaming spray of beige non-humor ended up being.

The movie is a complete inversion of the principle of something being greater than the sum of its parts. The sum of the parts of this thing would be something to behold, but instead the script systematically through assembly managed to destroy all of the component value of its parts.
It’s quite impressive from that perspective, the sheer accomplishment of being given the finest ingredients, and then burning down the kitchen.
Anyway, I think all of you should watch it immediately. Because misery loves company.

America: The Motion Picture is now on Netflix.