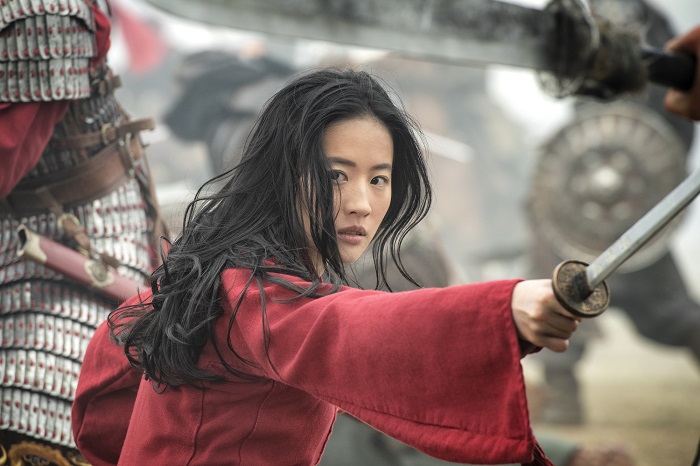 Review: ‘Mulan’ Flattens Its Titular Character into Yet Another Supercharged Superhero

Visually resplendent but narratively stifled, Mulan is the nexus of so many questions currently being argued about pop culture, movies, adaptation, and representation. Who gets to tell which stories? What ethnicities and races and nationalities should we be devoting more time to onscreen? What do movies, as a form, lose when we transport them from in-theater to in-home viewing? How much loyalty do adaptations owe to their originals? You might wonder all those things while watching Mulan because the film, while packed with dazzling imagery and, in a new move for Disney, the impressive choreography of the wuxia genre, is an undeniably strange artifact of this moment, one that seems to be in conversation with all those queries. On paper, the representation politics of the film hold up—but they act in service of a story that is so adamant about traditional masculinity and nationalist loyalty that there’s literally no other plot. Niki Caro’s Mulan is grandly rendered but narrowly minded, and the film’s self-seriousness will make you long for the 1998 animated version’s subversive gender politics and sense of fun.

“Loyal, brave, true” are the guiding words taught to Mulan, the eldest daughter of a Chinese family living in a small village. As a child, she is rambunctious and reckless; her father Hua Zhou (Tzi Ma, of Tigertail), who narrates the film, describes her as a “young shoot, all green.” Mulan, her father, her mother, and her younger sister live in an apartment in a circular building, with an empty middle common space, where all the villagers can convene. (This very educational Twitter thread about the movie informed me that this building is a Fujian tulou). It is before a huge audience that young Mulan chases a chicken, leaping and racing up the stairs, skittering along the roof, and then safely making her way back down through a mix of acrobatics and gymnastics. This is all easy for her, and her parents are worried. Who would want to marry a young woman this willful? How will Mulan bring honor upon her family by acting this way?

A decade or so passes. In their village, Mulan (Liu Yifei) has grown up to be a young woman people grumble about, and her parents’ concern deepens—will a matchmaker be able to find her a suitable husband? Meanwhile, outside of their community, danger grows. A group of nomadic Rourans (styled here as Mongolian Dothrakis) are intent on invading China as revenge for the Empire’s expansion into their ancestral lands, and their leader Bori Khan (Jason Scott Lee) wants to kill the Emperor (Jet Li) himself as revenge for the murder of his own father. Alongside Bori Khan stands the witch Xian Lang (Gong Li), who can possess others, shapeshift into a falcon (retaining claw-like bird fingers!), and hold her own in a fight. But even as the holder of such immense power, Xian Lang has to answer to the brutish Bori Khan, whose sole draw is that he promises her equality in the new empire he will build after spreading discord, killing the ruling class, and taking over the country.

With all this potential turmoil, the Emperor announces the forced conscription of one man from every family into his Imperial Army, to defend the country from invaders. Hua Zhou, with his knee injured from the last war, must go, and when Mulan protests, he is uncharacteristically curt: “I am the father. It is my place to bring honor to our family on the battlefield. You are the daughter. Learn your place.”

Mulan, though, is infused with the chi, presented here by the (non-Chinese) screenwriters as something a little different from the traditional concept. Instead of just a life force or living energy, Hua Zhou tells Mulan that “chi is for warriors, not daughters,” and refers to her amount of chi as “your gift.” Screenwriters Rick Jaffa and Amanda Silver (who wrote all three of Matt Reeves’s Planet of the Apes trilogy, as well as Jurassic World), along with Lauren Hynek and Elizabeth Martin, add a glaze of Orientalism onto the chi concept by making it the reason for Mulan’s courage, fighting acumen, and familial loyalty. With so much chi, of course she would volunteer to take her father’s place in the Imperial Army, leaving in the middle of the night, dressing in her father’s armor, taking the familial sword and horse, and pretending to be her father’s son. With so much chi, of course she would set herself apart during military training, accomplishing far more than the young men—none of whom are given much to do, although Chen Honghui (Yoson An), is very lightly presented as Mulan’s love interest. And with so much chi, of course she would attract attention from the unit’s commander (Donnie Yen), and from Xian Lang, who realizes that Mulan is hiding a secret.

The power Mulan wields acts as a narrative shortcut, taking the place of any real character development. Instead, the film sets up certain binaries that we’re supposed to just accept, and those divisions stand in for actually building out relationships, friendships, or other character dynamics. Mulan’s younger sister is terrified of spiders, and her mother and the matchmaker all wear too much makeup—are we supposed to read them as lesser-than Mulan? Sillier? Less worthy? The young men in Mulan’s unit laugh when she, still pretending to be a boy like them, describes her ideal woman as courageous—are we supposed to think of them as brutes? Simple-minded heathens? Like so many Disney movies, the film relies on certain concepts like arranged marriage to get fixed reactions from us, but doesn’t do the work to try and understand any of the relevant cultural complexities or details. All you would know about Chinese culture here is that they pride themselves on military might and familial togetherness, and those ideas are presented so blandly as to be quite stale. Gone are the animated film’s experimentation with gender identity and performance—there are no concubine outfits here, and no attempts by the young men to understand Mulan’s motivations. They just accept her as being as good as them because she can fight well, and she can only fight well because of her chi, and so we get a hero’s journey without much work, and we never understand Mulan as an actual person. It’s strange that a movie so feminist in its surface presentation is actually reinforcing traditional stereotypes about masculine value (the same argument made by some circles against Disney’s Captain Marvel, actually), and it’s disappointing that the only character detail we really know about Mulan by the end of this movie is that she has really nice hair. She’s a vessel for myriad clichés about Chinese culture, but she never feels like a real person. 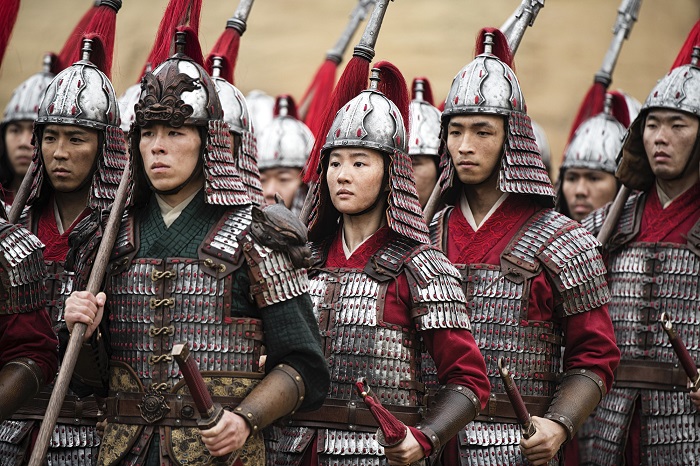 Would this film have played better in a theater? Probably. The $200 million budget, the highest ever for a female director, shows up in every gorgeous location, from snowy mountains to grassy steppes to the lavish Imperial Palace, and in Xian Lang’s costume, with its bird-skull crown and armored-scale skirt. The fight scenes aren’t particularly innovative, but for younger viewers unfamiliar with wuxia, this would be a good introduction to the genre. Some shot compositions are impressive, including the horizontal line of Xian Lang’s Shadow Warriors, clad all in black, galloping on their horses toward Mulan and her fellow soldiers, but the final altercation seems to crib from the climaxes of Batman Begins and King Arthur: Legend of the Sword. And ultimately, this film lets down Mulan herself by criticizing femininity that is “quiet, composed, graceful, elegant, poised, and polite,” but then only allowing Mulan to raise her voice to express the same stereotypes about Chinese and East Asian culture that Hollywood movies have been trafficking in for a long time. Representation matters, and Mulan, with its Asian cast, is a triumph in that regard. But deeper than its surface, Mulan isn’t saying much.

Mulan is available for Disney+ subscribers for an additional $29.99. It arrives on Disney+ streaming as part of the subscription package on December 4.

← Drab 'Measure For Measure' Takes Shakespearian Problem Play and Adds More Problems | Candace Owens Took a Shot at Cardi B, It Didn't Go Well for Her →