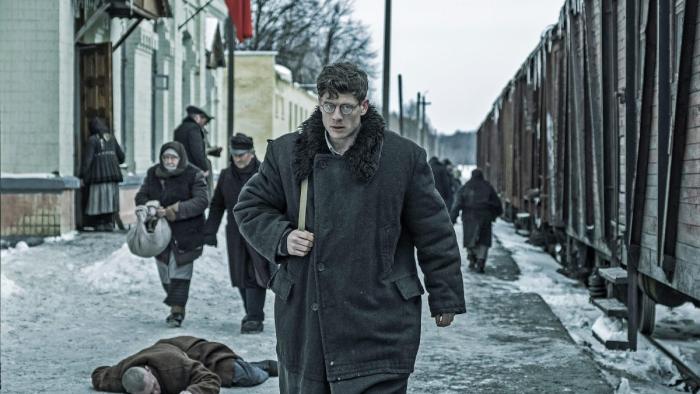 Agnieszka Holland is one of those directors who is so skilled and prolific as a journeyman in both film and television that it’s easy to overlook just how skilled and eclectic she can be when she’s given the freedom to do whatever the hell she wants. She freely jumps from American television series like House of Cards and The Wire to films in English — the best adaptation of The Secret Garden — and her native Polish, such as 2017’s Spoor and 2011’s In Darkness, which landed her an Oscar nomination for Best Foreign Language Film. All that AND she’s a literary translator? Don’t sleep on Agnieszka.

With her latest film, Mr. Jones, Holland dives into a little-known story of pre-World War 2 Eastern Europe. In the early 1930s, Welsh journalist Gareth Jones became one of the first foreign journalists to interview Adolf Hitler, accompanying him and Joseph Goebbels to Frankfurt on the Richthofen airplane. While the cigar-smoking old men of power in Britain don’t think much of his warnings about the Nazi regime’s growing ambitions, Jones’s connection to former Prime Minister David Lloyd George helps him gain entry into the Soviet Union. His plan is to interview Stalin and find out more about the nation’s mysterious economic growth. His travels are restricted to Moscow, forever under the watchful eye of the Kremlin, as outside journalists find themselves unable to do any real reporting and instead spend their time drinking, partying, and watching the world burn. Uninterested in orgies and heroin, the driven Jones finds his way to Ukraine, where millions of people are starving to death in a man-made famine created by Stalinist machinations.

Jones, as played by James Norton of Grantchester fame, is a bookish and unassuming young man with a single-minded determination to get the story. With his owl-like spectacles and deceptively chipper expression, he doesn’t seem to fit into any room he enters, be it the haughty offices of Lloyd George or the obscenely lavish soirees of Walter Duranty, the then-celebrated New York Times bureau chief in the city who has become far too cozy with the enemy (Peter Sarsgaard brings true slimy cowardice to the role of a man whose journalistic malpractice remains one of the biggest black marks on the history of the paper.) The film doesn’t overburden the viewer with Jones’s background or any biopic-friendly clichés about how any past tragedies encouraged his search for the truth. Truthfully, he’s not much of a hero, but he’s not supposed to be. No one dashing soul came to the rescue of the starving Ukrainian people, nor should that have been the job of a mere journalist from Barry. Jones, as shown here by Holland, is a witness, a reminder to the viewer that the most abhorrent atrocities committed the world over need to be paid attention to. Without that, the cruelties and abuses of figures like Stalin and their lickspittle toadies will be ignored in favor of easy power.

While the film technically fits the definition of a biopic, Holland feels uncomfortable with the genre’s confines and works hard to overcome them. There are no flashbacks to Jones’s youth nor does the film come to a grinding halt to explain the general history of Stalinism in the 1930s. For most of the first hour, Mr. Jones has the air of an old-school thriller, following Jones through the streets of Moscow like the outsider that he is, with shady strangers seemingly following him at every turn. Norton is filmed in tight shots, often from below, a reminder that he has nowhere to hide. The dizzying strangeness of this world is shown as a mixture of Cabaret and The Third Man, with the stifling confines of the Soviet government contrasted with the lascivious parties thrown by ex-pats able to turn off their sense of decency in favor of self-interest.

In the second half, as Jones escapes into Ukraine, the movie comes to an unnerving stillness. The cinematography changes to a monochromatic color palette akin to old Soviet dramas of the era. Everything is the same pallid shade of death, from the barren trees to the pies of corpses dragged through the snow by horseback. There’s a remarkable efficiency to Mr. Jones, even with its two-hour length. Like Jones himself, Holland can’t afford to waste time. Jones isn’t exactly a brilliant spy, so his infiltration of this cold new world only adds further tension to his plight. He’s still being watched at every turn. It feels almost insulting to call the movie ‘beautiful’ given the horrors of its subject matter, as well as a few notable scenes that elicited true shock from yours truly, but Holland and her team know what they’re doing. The starkness of this oft-forgotten period of history is not diminished by its stylistic portrayal. Indeed, it only further emphasizes the brutality of what millions of Ukrainians were forced to live through and the importance of bearing witness to it.

One wonders if the film-makers or producers were worried that Jones would not seem important enough to warrant such a film, which may explain the random appearances of George Orwell, who was said to have named a character in Animal Farm after the journalist (the farm owner who gets too drunk to care for the animals — nice one, George.) If the intention is to remind the audience that Jones was a big deal or draw parallels between Ukraine and the writing of Orwell’s novel, it falls flat and drives the overriding tension to a halt. It does not matter in the end if Jones isn’t the perfect protagonist for such a story or if never garnered the historical reputation of Orwell and his contemporaries. That’s not the point Holland wants to make. A fictionalized debate of ideas between Jones and Orwell on the pros and cons of the Soviet experiment stumbles for the same reason. Mr. Jones did not need bullet points of history to get the job done. The rest of the movie is a testament to that.

← St. Louis 'Ken' Is Upset His Life Has 'Been Ruined' For Pointing An Automatic Weapon At Peaceful Protestors | 5 Shows After Dark: 'The 100' on The CW, 'Full Frontal with Samantha Bee' on TBS →