The truest indicator of cultural relevance is mimicry. As such, the existence of Vanquish proves the singularity—and the success of—the John Wick franchise. Pulling off everything that director Chad Stahelski, screenwriter Derek Kolstad, and star Keanu Reeves do in those movies isn’t easy. They build an interior world. They execute dazzling stunts. They make the character of John Wick empathetic and heroic even though he’s a murderer of dozens, if not hundreds. Vanquish doesn’t think as broadly as that franchise, but so many of this neo-noir’s elements—its color palette, its explosive bursts of violence, its high-speed chase scenes—are evocative of what John Wick has already done better. Hell, Vanquish star Ruby Rose appeared in John Wick 2! The similarities here are universally unflattering for Vanquish, a movie that inspired in me only one reaction: Why?

Morgan Freeman (why?) and Rose (why?) costar in Vanquish, directed and co-written by George Gallo, who also wrote the story for Bad Boys. He returns to the land of questionable policework here for an ostensible thriller that basically telegraphs all of its narrative twists and turns, and often indulges in random black-and-white sequences and gimmicky editing choices to invigorate the plot. Even at only 96 minutes, Vanquish is padded: an exposition-heavy credits sequence and a lengthily celebratory denouement drive home that the middle is quite lacking.

After a long career of distinguished police service, Damon (Freeman) has finally retired after an on-the-job injury. Now, in a wheelchair and the recipient of a police pension, Damon lives alone in his palatial, Miami Vice-style mansion, which was clearly purchased using illegal means. Damon was a dirty cop and runs a group of dirty cops still operating within the force. The entire city, in fact, seems to be corrupt: the Church, the nightclubs, the government. “I’ve stepped off the righteous path,” Damon confesses to a priest, and the man’s “We all have” response says it all. 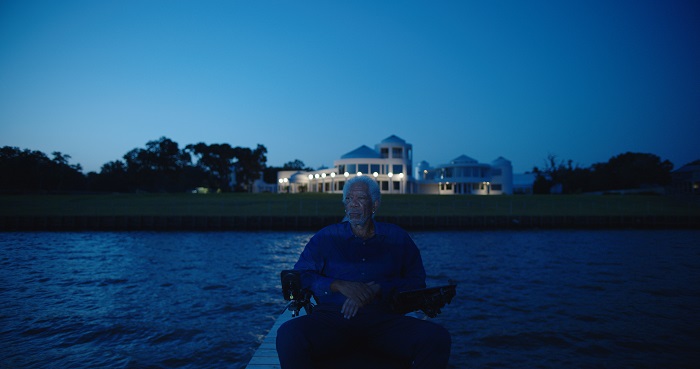 This seems to have been going on for a long time. Yet, all of a sudden, Damon seems to suspect something is amiss. So he forces his caretaker, Victoria (Rose), to use “some of your old skills” to travel around the city, visiting five locations, picking up money that Damon is owed, and returning to his mansion. His command seems like a major violation to Victoria, a former drug runner for the Russian mob who was trying to use her job with Damon to go clean—and care for her daughter Lily (Juju Journey Brener), who is sick with a mysterious illness. A cliché-laden conversation between Damon and Victoria hammers home the betrayal she feels, but once Damon kidnaps her daughter, Victoria doesn’t really have a choice. She has to comply, and if Damon dies beforehand, Victoria will never know where he’s taken her daughter.

So Victoria, already outfitted for her “caretaking” job in a snazzy white leather moto jacket, grabs some guns from Damon’s armory, straps on a body camera, and gets onto a motorcycle with another camera on her helmet. Connected to Damon, who can watch and hear her every move, Victoria whizzes around the city, with Rose delivering stilted dialogue and cocking her head in an irritated way in every damn scene. For his part, Freeman’s Damon is basically a human Google Maps, and the actor drops his energy level to match. “The exit’s just ahead,” “get out of there,” and “keep going” are delivered in varying degrees of deadpan, while Rose is stuck in a flat pissed-off mode with rejoinders like “F*ck you and your left.” A woman arguing with her GPS is me every time I try to navigate Washington, D.C.! This is not cinema!

Do we learn anything about Victoria during all this? Not really. A traumatic backstory involving her brother is alluded to but never explained. Rose never exudes the kind of maternal, reformed energy a character like Victoria needs. It’s all surface. At least that matches the film’s visuals, which attempt style with first-person-shooter-like action scenes and color-flooded locations (Damon’s home all in blue; a drug dealer’s home all in purple). The movie’s best attempt at humor is by naming a larger character “Mr. Smalls.” Its most unintentionally self-aware moment is Damon saying, “I sleep just fine.” You’ll do that too if forced to sit through Vanquish.

Vanquish is playing in select theaters beginning on April 16, 2021, hits on-demand and digital rental on April 20, and is released on DVD and Blu-ray on April 27.

← Conan O'Brien Wants To Be An Action Star, Let's Make That Happen | My Complicated Relationship with 'Manifest' →