Review: ‘Miss Fisher and the Crypt of Tears’ is a Flirty, Subversive Return to the World of Our Favorite Lady Detective

What an absolute delight Miss Fisher and the Crypt of Tears is. Partially fan funded and arriving five years after the last time we saw the clever lady detective and fashion maven Miss Phryne Fisher (Essie Davis) climb into an airplane and fly back to London to return her tricky father to her mother, five years after Miss Fisher and Inspector Jack Robinson (Nathan Page) finally kissed, five years after all those mysteries involving anarchists and World War I veterans and women’s rights activists and magicians and actors and advice writers and spirit mediums, Miss Fisher and the Crypt of Tears is a flat-out perfect return to this world. It’s fun, it’s stylish, it’s quietly but confidently subversive, it’s sexy as all get out. I watched it with a gigantic grin on my face the whole time—its energy is infectious.

When we last left Phryne Fisher, most everything in her life was good! Her companion and assistant Dot Collins (Ashleigh Cummings) married long-time love Constable Hugh Collins (Hugo Johnstone-Burt), Phryne and Jack had just solved a mystery involving the radioactive substance polonium, and Phryne had reached some sort of closure with her caddish father, who was mysteriously in Australia. When Phryne and Jack kissed before she climbed into her plane, it was a. incredibly sexy and b. a lovely open ending for us as viewers. Would Jack follow her to London? What came next in that story? Would there ever be a world in which the uptight, impressively thighed Jack let down enough of his guard to truly accept Phryne? Would Phryne, Queen of Thirst, allow herself to give into Jack’s affection, even though she knew herself and knew that she wasn’t the marrying kind? Many a slash fic was written about this, and thankfully Miss Fisher and the Crypt of Tears doesn’t leave us hanging. 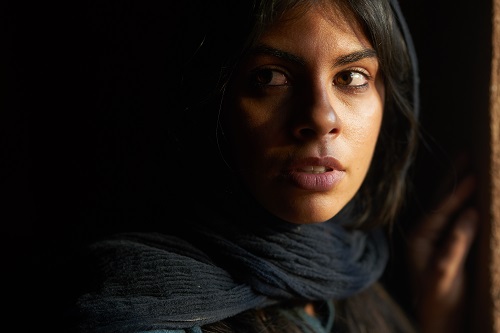 But the film does begin far away from either Australia or London: In 1929, in the British Mandate of Palestine. When World War I ended and the British and French powers divided up the Ottoman Empire for themselves, a plan they had agreed upon even before the war was over (helping create some of the very arbitrary national lines that make up the Middle East today), the British ended up with Palestine. The Palestinians were not happy about this—we see people protesting in the streets in Crypt of Tears—and Phryne sympathizes with them, in particular the young woman Shirin Abbas (Izabella Yena). She insists that her family was murdered and her village destroyed, but the British-led police force don’t believe her, and their administrator Lord Montague (Ian Bliss) rejects her story. He would rather keep her locked up forever—and he’s furious when Phryne breaks her out.

But even free, Shirin won’t let go of her story. Something awful happened to her Bedouin tribe, to the Palestinians who actually lived in this land before the British arrived there, and she doesn’t understand why her uncle, Sheikh Kahlil (Kal Naga) won’t take her side. As guests of Miss Fisher’s host, the Lofthouse family, Shirin and the Sheikh are trying to fit into British society—into a world that is natural to the braggart Lord Lofthouse (Daniel Lapaine), who drinks a little too much; to his wife, Lady Eleanor (Jacqueline McKenzie), who is excited to wipe away Shirin’s heritage while she introduces her to British society; and the Lord’s younger brother Jonathon (Rupert Penry-Jones), with whom Phryne has a close friendship. Yet Phryne has also made a promise to Shirin, to help her understand what happened to her family. And when Jack arrives in London, he gets pulled into Phryne’s quest—and yes, there is flirtatious banter to be had! 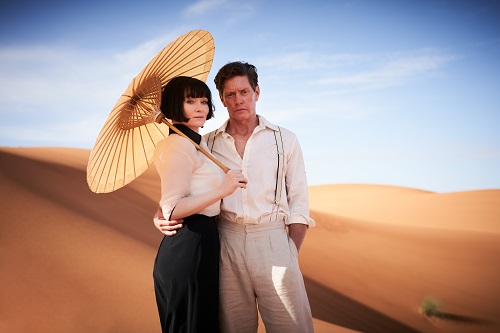 So much of The Crypt of Tears sizzles right from the beginning because all the pieces from the series are here, and they fit together like no time has passed from the season finale of the third season. Director Tony Tilse, who worked on the series, brings the same sense of intentional pacing and visual language to the film. Deb Cox, who was the head writer of the show, penned the script, and it crackles with that seductive Phryne energy and, thankfully, continues the show’s no-bullshit attitude. There is no question that the British empire is bad, that the Palestinian people are suffering, and that the trauma of World War I spread past just the British soldiers involved—the show often talked about how difficult it was for people to move on past the war, but here we see how the world is affected outside of only Australia and Britain. We get Shirin and Khalil defending their people, we get an educational history lesson in Alexander the Great’s reign and the geography of the Middle East, and we get a frankly excellent supporting character in Professor Linnaeus (John Waters), a friend of Phryne’s who specializes in the “cultural liberation … of ancient looted artifacts.” The man steals back priceless items the British empire had originally stolen, and sends them back to their rightful cultural owners! Paging Michael B. Jordan in Black Panther! Professor Linnaeus knows what’s up!

Aside from the film’s thankfully proper respect for the Palestinian people, their land, and their culture (the score from Greg Walker is exceptionally good, full of Middle Eastern flourishes!), everything else about The Crypt of Tears is comforting and familiar, but scaled up to appropriate cinematic scale. The film was shot in Morocco, and although some of the green screen isn’t the best, you get a real sense of the wideness and openness of the desert, especially in contrast with the Lofthouses’ opulent but claustrophobic manor. Davis and Page haven’t lost one step; they still have glorious chemistry. The mystery is twisty-turny, and as always in this franchise, makes clear the myopia and narrow-mindedness of the wealthy and powerful. And there are also gorgeous gowns, and a ball where Jack and Phryne dance, and Phryne racing around in her plane, and from top to bottom, it’s a lovely return to the Miss Fisher’s universe. My only complaint? Not enough of our favorite Communist drivers Bert and Cec. I guess I’ll just have to hope for a sequel.

Miss Fisher and the Crypt of Tears played in limited release around Australia and the U.S. before premiering on Acorn TV on March 23. The streaming service also has the Miss Fisher’s Murder Mysteries series available. Acorn TV is offering a free 30-day trial with the coupon code FREE30.

← Danai Gurira Is Fantastic in Her Otherwise Middling Send-Off Episode of 'The Walking Dead' | 5 Shows After Dark: 'Supernatural' on The CW, 'Spring Baking Championship' on Food Network →