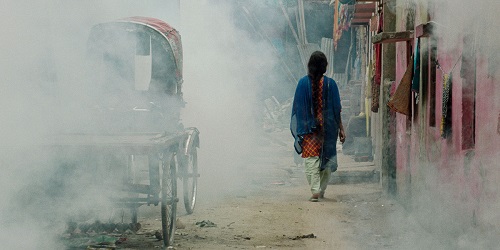 Filmmaker Rubaiyat Hossain’s Made in Bangladesh opens with an all-too-common tragedy: In Bangladesh’s capital city, Dhaka, at a garment factory riddled with safety violations, with only one overhead fan cooling the room full of female employees, with exposed wiring and overextended electrical cords, a fire breaks out. “Allah save us!” the women cry when running toward the exit, but one worker dies, the factory owners refuse to pay the remaining women for the overtime they were working when the fire broke out, and there’s nothing to be done. 23-year-old Shimu (a fantastic Rikita Nandini Shimu) wants her money, but security guards at the factory refuse to let her in, calling her a whore, and when the factory opens again, she’s subject to more verbal abuse by the higher-ups.

All of this is galling to Shimu, who is used to being pushed around but fights against it with every breath. She’s sick of falling behind on rent to her landlord. She’s exhausted being the only financial provider; her husband Sohel (Mostafa Monwar) is becoming increasingly involved in the local mosque but hasn’t found a job after months of unemployment. And she hears too many of her own complaints repeated back to her by her coworkers and friends: “How many times am I going to escape?” they wonder of recurring factory fires. “There’s no law for poor people,” they say of how the factory takes advantage of them. And, most often: “We’re women. We’re screwed if we’re married, and we’re screwed if we aren’t.” 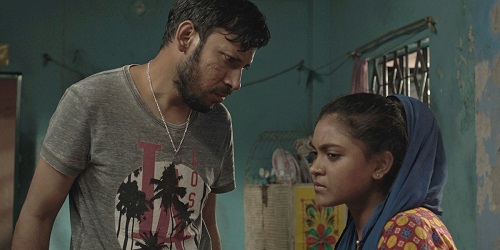 Shimu and her friends can’t imagine a different life, but they know they want one. And a very tangible solution, they learn from a labor organizer, is to form a union. There are laws to protect these women, the organizer insists, and if 30% of the factory’s employees sign a union contract and the government approves the union, they’ll finally be given bargaining power to stand up to the bosses who search their purses and call them prostitutes and withhold their pay. And so Shimu devotes herself to making this possibility a reality, even as so many people around her—from skeptical colleagues to her increasingly overprotective husband—doubt that it would change anything.

Made in Bangladesh does an excellent job distilling the myriad social pressures keeping these women subjugated, and how the suffocating power of capitalism is integral in these traditionalist viewpoints. The conservativism of Islam manifests not just in how Sohel commands that Shimu wear a headscarf, but in how the bosses at the factory can accuse a woman of being unclean and fire her without a second thought. The corruption of the government is displayed both when foreign businessmen come through the factory and ignore all the safety violations they see to secure lower costs, and when Shimu starts wrangling with federal officials to recognize the union. The offices she visits are guarded places, dank hallways, rooms stuffed with papers and files that no one has looked at in years, and how other they seem in comparison with Shimu’s neighborhood—littered with trash, overstuffed with residents, populated by stray dogs and orphaned children—demonstrates how far away the government seems from its own people.

So much of Made in Bangladesh revolves around Shimu that you have to sympathize with the character to get into the narrative, and Rikita Nandini Shimu is a true wonder, alternately fiery and indignant and gentle and hesitant. In her interactions with Sohel, you can see the young woman at the core of this character, only 23 years old and still hopeful that her husband will grow to better understand her. That’s entirely different from who she is with the female labor organizers, whom she treats with a mixture of respect and solidarity, or with the male factory bosses, who are the focus of strings of expletives. It’s a well-rounded, charismatic performance, and a final scene that brings together all of those elements of Shimu as she fights for her rights and for her union is an invigorating one.

But Shimu isn’t the only woman Made in Bangladesh pays attention to; various coworkers are also wholly developed so we have a better understanding of what a single woman would go through in this society, or what a mother would endure, or even how someone like the female landlord—already seemingly powerful—would have to leverage her own young daughter and essentially sell her into a marriage to an older man to make ends meet. To fight against that capitalist, patriarchal system is an overwhelming task but a worthy one, and Hossain’s Made in Bangladesh is cinema as activism, demanding your attention.

Made in Bangladesh screened as part of the Contemporary World Cinema series at the 2019 Toronto International Film Festival.

← Who Won 2019's 'America's Got Talent' Competition? | Review: Golshifteh Farahani Doesn't Have Enough to Do in 'Arab Blues' →