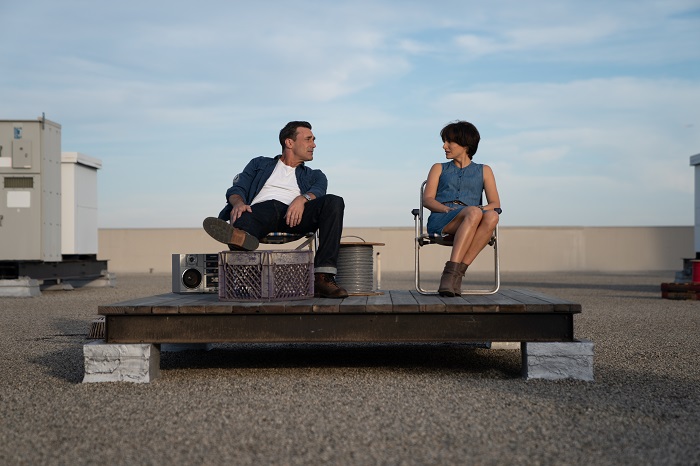 Review: ‘Lucy in the Sky’ Wastes Natalie Portman in a Film That Fails to Grasp That Not Every Story About Women is One of Empowerment

I’ve spent a week puzzling over Lucy in the Sky, a movie that is not good, exactly, but is so fascinating in its misfires that I might be entranced. In his directorial debut, Noah Hawley transfers over many of the same tricks as his show Legion on FX, like fluctuating aspect ratios, evocative lighting, and sped-up sequences; in the starring role, Natalie Portman brings an aggressive energy that makes you think she’ll burst into a third Saturday Night Live rap any second. It’s stylishly made and commanded by Portman’s presence, but it’s also a mess, an attempt by Hawley and his male cowriters to say something profound about the female condition that often falls remarkably flat.

Perhaps you already know the story that Lucy in the Sky is based on, but indulge me. The inspiration for the film from Hawley and first-time screenwriters Brian C. Brown and Elliott DiGuiseppi is former NASA astronaut Lisa Nowak, who was arrested in February 2007 on a number of charges, including attempted kidnapping. The details that came out after Nowak’s arrest made the news were salacious and tawdry: Nowak was in a love triangle with other astronauts, she had driven from Houston to Florida to confront her female rival (maybe wearing adult diapers while making the trek, so she didn’t have to stop), she had upended her life and her career for a man who had pushed her aside. That’s sort of a tragic story, yes, but on a micro level. What Lucy in the Sky tries to do, and fails to do, is scale up this situation onto a macro level, to alter fundamental elements of Nowak’s story to make some grand point about the social, professional, and romantic pressures women must face every day.

That space has become Portman’s sweet spot as an actress: Look at her work in Black Swan, Jackie, Annihilation, and Vox Lux. In those films, Portman vacillates between playing a woman who wants all eyes on her (Black Swan, Vox Lux) and a woman who wants to thoroughly disappear (Jackie, Annihilation). Lucy Cola, her character in Lucy in the Sky, wants to do both, but the script’s made-up details of her life are so intentional as to almost be satirical. Nowak was from Maryland, but the film makes Cola from Texas, as if the latter would give the character’s rough-and-tumble toughness more authenticity. Nowak’s husband was a Naval officer and pilot, but Lucy’s is the dopey, blindly faithful, and PR professional Drew (Dan Stevens, the star of Legion), who couldn’t be more of a Nice Guy if he tried. He’s not man enough for her, the movie stresses—too comfortable in the kitchen, too eager to have kids—and her dissatisfaction with him pushes her toward fellow astronaut Mark Goodwin (Jon Hamm, in full Don-Draper-charm-offensive mode). 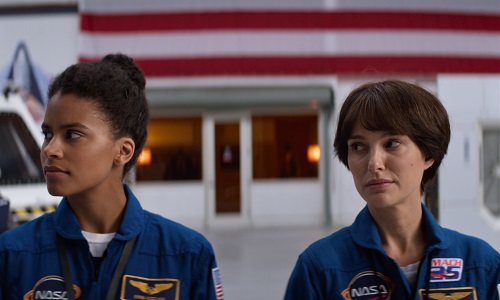 The affair that Lucy initiates with Mark takes Lucy in the Sky in the direction you’ll recognize from the news stories—her increasing paranoia, her unhinged behavior, her eagerness to blow up her life, and her competition with younger, smarter, more-sophisticated astronaut Erin Eccles (Zazie Beetz). But Lucy in the Sky stumbles early, and often, when it tries to make this a story about female subjugation, too. Lucy’s boss (played by an underused Colman Domingo) thinks she’s too committed to the job. Mark wonders whether Lucy is too emotional, while Drew thinks she might not be emotional enough. And because the script can’t figure out a way to communicate Lucy’s internal conflicts to us, her frustration and her anger, it constructs a niece for her, who comes to stay with Lucy and Drew and for some reason tolerates her aunt’s rantings about men. It’s a lazy way for the film to make clear its points about Lucy’s disconnect from reality, and it shifts the film into this specifically male-vs.-female space that the narrative can’t sustain.

Have you noticed that I haven’t mentioned space yet? I have not! And that’s because that movie also never makes quite clear what exactly about space captivated Lucy so much. In very general ways, Lucy in the Sky and Ad Astra have thematic similarities: a main character who can’t quite connect with other people and who feels shaped by society to achieve highly. But Ad Astra clicked because it was gorgeously made, with beautiful depictions of space and our solar system, and because the script underscored why Brad Pitt’s character felt so alienated from the experience of being human. Lucy in the Sky spends about five minutes in space and doesn’t clue us into what about the experience touched Lucy so much. Was it the sense of control and power? Was it the exclusivity of the experience? And how did however it felt to be up there compare with the experience of jumping into bed with Mark? I know it’s a dude who looks like Jon Hamm, but still!

At one point, the ghost of Lucy’s dead grandmother sneeringly says to her, “I think all this astronaut dick has made you soft,” and that sentence is sort of insane, but I also think it’s one of the only honest moments in the movie! Lucy in the Sky can’t figure out what makes its main character tick, so it piles on visual flourishes that serve no discernible purpose (those damn aspect ratios!) and character details that are more superficial than insightful (Lucy orgasming from Mark going down on her makes her think of space, a moment so devoid of subtlety that I actually laughed out loud in the theater). Portman has some truly astonishing scenes throughout, including one where she keeps on working during an underwater training session even as her astronaut suit and helmet fill up with water and she barely avoids drowning, but her performance ultimately feels wasted in Lucy in the Sky. I ask this question a lot, but: What would this narrative have looked like with female writers and a female director leading the project? I’ll be wondering about that version of Lucy in the Sky for a long time.