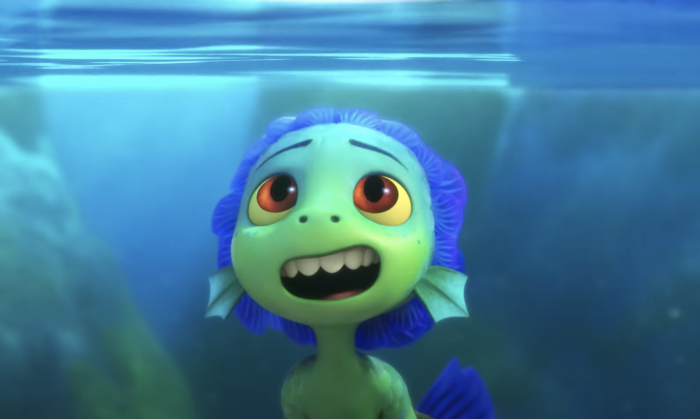 Now on Disney+: 'Luca' Is Pixar's Best Film in Years

Childhood memories just burn brighter. The grass greener, the sky more blue. I remember the summertime fields where my best friend and I would play as a buzzing, lush kaleidoscope of color and life. I have no doubt if I went back today these same spots would now seem muddy and small; the magic of our imaginations seeped out like ink washed off by a storm. So one of the great joys of film animation has been when it’s well wielded to carry us back to such hand-drawn places, simplifying everything to tactility and Crayola-instinct; to where we believed the stars were little fishes in the pool of the sky. And just because we believed it, it was so.

Pixar’s latest animated feature, Luca, wields this sort of simplicity with such grace and ease that I quadruple dare you to not be swept up, up, and away. It will transport you not just to a place (a small Northern Italian seaside town) or a time (vaguely the 1960s) but a mindset, a purely ecstatic emotional state of being. Don’t let anyone tell you this film’s purified sense of purpose is a deficit. This is Pixar’s best film in years, simply because it does so simply. Readers, I promise you I sobbed.

Luca’s plot might not seem so straightforward from its start. Everyboy Jacob Tremblay lends his voice to Luca, whom we meet as a blue-finned fish-person. He lives down under the sea, where he spends most of his time shepherding smaller, dumber fish … and I suppose the word would be “fish-herding” but why do they baaaaaa then? Besides to make me laugh, of course? Precisely to make us laugh, and that’s just one of numerous goofy little touches that will ease you into this strange environment fast. This is important since the film’s primed to pull your flippers out from under you with its quick next-gen revelations.

Like Ariel before him, Luca has taken to gathering little human trinkets (thingamabobs!) that have found their way down to his little corner of the sea-reef, dreaming of those places where they stay all day in the sun. And before he can even comb his hair with a fork, a slightly older fish-person by the name of Alberto (Jack Dylan Grazer) has swum into his life alongside a sunken phonograph and splashed him onto the sand—all the better to show and stand him up on his land-legs.

Literally. In the way of all these sea-people stories, the air does something magical on their fins, transforming them into regular-looking human people a la Daryl Hannah in Splash. (Yes this might be the only time a beauty like Daryl Hannah has been described as “regular looking.”) That is, as long as they can stay dry. Thankfully, Luca doesn’t even try to explain too much of this. In the way of all fairy tales or childhood memories these things just are, just flow from fantasy to feet and back again like magic, like swirls of light and sound so lovely you wanna—you have to—reach out and touch, run your webbed fingers along their surface and skin.

Luca feels that magic in the way it watches skin exquisitely morph to scales, purple and blue and pink again; in the way the heavens open up and reveal boundless twinkling majesties for little boys to skip and scavenge among; in the way a field of golden flowers stretches from here to forever and the surface of the sea becomes so bright your eyes dazzle blindly, gladly blinded. As the two young men run off to the nearest human town to make their dreams come true even the human people’s realities seem elevated in that dazzling dream-like childhood manner. For instance, the center leg of a triathlon—in which the boys compete—involves eating as much pasta as one can stomach in as little time as one can manage. If I were to ask you to tell me a little boy’s dream of just being, I think you’d be hard-pressed to find a better one.

It all just makes sense on the purest level, speaking back to our purest selves. And that’s where Luca really dazzles. The heart of the film, the friendship, and relationship between Luca and Alberto, is so meticulously felt and realized that everything around it, all the flights of fancy and mustachioed boat-cats, ride with peachy ease in its wake.

Since its trailer dropped, much has been made of Luca looking like Pixar’s kiddie version of Luca Guadagnino’s recent gay masterpiece Call Me By Your Name. There are indeed plenty enough visual markers and story-beats to make that case (no matter what director Enrico Casarosa says otherwise). But in the most essential sense, all I know and all that matters is that Guadagnino’s film was the last time I felt so fundamentally seen by a love story, platonic or not. And if Luca can impart any of that sense of self and acceptance and joy and love to just one queer kid out there who’s aching for it then blessings be upon every single drop.

Luca premieres on Disney+ On June 18.

← 'Lupin Part 2' Review: Sherlock Holmes, But With Joie de Vivre | A Look Back At Sean Penn and Christopher Walken In 'At Close Range' →