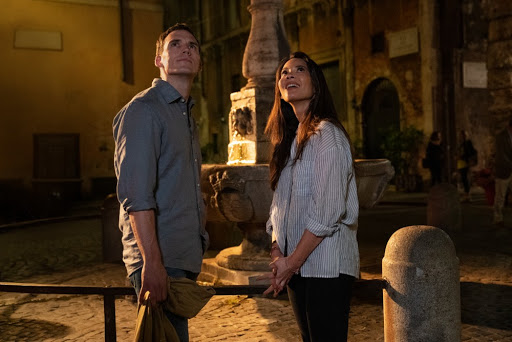 Rom-coms have done pretty well for Netflix these past few years. Even as they continue to fling obscene amounts of money at creating the next prestige TV breakout or winning over Oscar voters with an auteur’s passion project, the thing that seems to keep audiences hooked is smaller scale throwbacks to a genre that Hollywood declared dead a decade ago. After years of being told that rom-coms are dead in the water, a washed-up genre with no financial prospects, it’s a delight for us fans to see titles like To All the Boys I’ve Loved Before and Set It Up find their audiences. Frankly, at a time like this, couldn’t we all benefit from some fizzy romantic distractions full of pretty people and low-stakes silliness.

Love Wedding Repeat, based on the French film Plan de Table and which drops on Netflix this week, is sure to scratch that itch for those rom-com lovers in lockdown mode. Sam Claflin, in full Hugh Grant charming stutterer mode, is Jack, the frazzled big brother to Hayley (Eleanor Tomlinson), whose glamorous Italian wedding is set to be the event of the year. Jack’s biggest worry is being seated at the ‘English table’ with his nightmare ex-girlfriend (Freida Pinto) and her new beau who she seems to despise (Allan Mustafa.) Things seem to be taking a turn for the better when Dina (Olivia Munn), the seemingly perfect woman of his dreams with whom he spent one beautiful weekend several years ago. Since this is a wedding in a rom-com, things obviously go awry very quickly, with mishaps including a mild roofie scandal, a coked-up guest with plans of sabotage, a maid of honor speech from hell, and deeply uncomfortable seating plans.

The Richard Curtis vibes emanating from Love Wedding Repeat are intense. The obvious major influence here is Four Weddings and a Funeral, one of the great rom-coms of British cinema. For all of Curtis’s weak spots and his habit of cloying sentimentality, he’s at his best in juggling these unwieldy ensembles full of oddball characters while keeping their interactions charmingly natural. Four Weddings is a sharp story of the myriad oddities of the British middle classes and the pain of navigating a seemingly impossible system of rules and regulations. Dean Craig has some experience in this field, having written both versions of Death at a Funeral, but here, in his directorial debut, he seems a tad too willing to rest on broad tropes and swears, depriving the story of the quiet moments that make true rom-coms shine.

The primary tension seems to be driven by the ‘wacky’ contrast between this gorgeous and impeccably monied Roman wedding, all murals and gold detail, and a roomful of British people saying ‘tw*t’ a lot. It’s true that a nice strong British accent (mostly English but not exclusively) swearing can elicit a hearty chuckle but it doesn’t make a strong foundation for an entire comedy. It doesn’t help that it takes half the film’s runtime to get to its Edge of Tomorrow-style premise, and it doesn’t even utilize it in a particularly interesting manner. If you’re going to commit to a concept like this, with multiple alternatives for the ‘wedding from hell’ — and the movie certainly offers the ideal set-up for such shenanigans — then you have to go all the way. Sadly, we only spend the lion’s share of our time with two versions of the big day (although I do wonder how much of this film was left on the cutting-room floor since the end-credits feature lots of unused scenes.) The introduction hints at a much grander narrative, featuring a cosmic voiceover by a Judi Dench sound-alike talking about how fate loves to f**k things up. Those first few minutes suggest that the next hundred minutes will either be far more parodic of the rom-com genre as a whole or something with a shade of grandiosity to it. Of course, it’s neither of those things, and the ensuing tonal dissonance makes the experience all the more confusing. Cringe is the name of the game for the most part, with moments of weird darkness that don’t land. The movie is at its best when it just lets Claflin show off his slapstick chops and attempt to hold everything together.

Sam Claflin turns out to be a solid Hugh Grant stand-in with his appealing posh-boy fluster. He’s the glue holding this disparate mish-mash together, mostly through the sheer force of his ’90s rom-com charm and the affable sibling chemistry he shares with Tomlinson. The rest of the cast has brief moments to shine but there’s little meat to this stew. Aisling Bea and Joel Fry get some cute moments as the best friends at the party, while Tim Key, a truly underrated comedy genius, gets saddled with an irritating side-character who drones on about nothing and wears a kilt (he’s not Scottish, said kilt seems to only exist for more penis jokes in a film over-laden with them.) Munn plays the ‘perfect woman’ who Claflin longs for but their lack of chemistry is a big problem and they don’t share much screen-time together to make a true impact in any way. Really, Claflin feels like a far better fit with Freida Pinto, who seems uncomfortable in the role of ‘token b*tch’ who he and the audience are supposed to hate.

Love Wedding Repeat may prove a more enjoyable experience to those of you with a higher tolerance of cringe comedy than I possess. It seems patronizing to say that the film is just good enough for what it does (although that’s kind of all we expect from a lot of these Netflix original movies if we’re being totally honest here) but it is a film with a low-stakes objective that it accomplishes in its standard runtime. The set-up certainly provides plenty of opportunities for sequels, spin-offs, and re-imaginings that could prove more fruitful than the original product. Still, don’t expect it to sit among the upper echelons of Netflix rom-coms any time soon.

Love Wedding Repeat is available to watch now on Netflix.

← 'The Good Fight' Premiere Was Set During a Hillary Clinton Presidency. It Was a Nightmare | I Mean, It's a Little Weird that Bruce Willis is Quarantining with His Ex-Wife, Demi Moore, Right? →