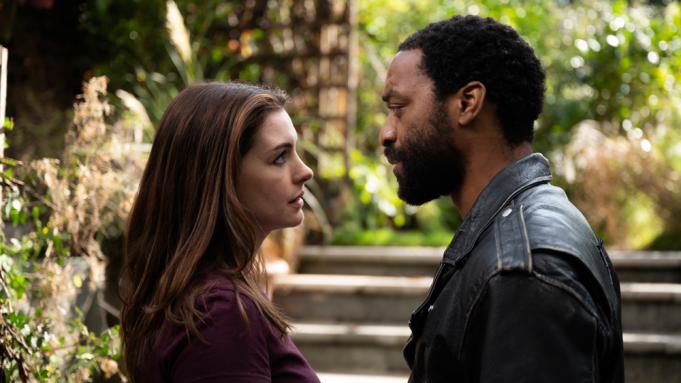 Review: HBO Max's 'Locked Down' Is No Damn Fun

Steven Knight reportedly wrote the script for Locked Down in July 2020 over a dare; director Doug Liman shot the film in September; the pace at which it was shot required that actors Anne Hathaway and Chiwetel Ejiofor tape up their lines around the set; all the other stars in the films are merely cameos, half of which are seen over Zoom; and the film was released on HBO a little more than two months after it was shot.

Res Ipsa Loquitor. The thing speaks for itself.

In other words, it’s about as decent as one might expect given the circumstances, which is to say: Locked Down is not very good, and it’s made all the worse by the fact that it’s not only set in the March lockdown but it’s about living in the lockdown, with a joyless, uninteresting heist sequence appended onto the end of the film, as though to give the film’s eventual buyers a way to market it.

“It’s a caper set during the lockdown!”

Lock Down is a rambling — droning, really — relationship drama set inside a London apartment. It’s about Linda Thurman (Hathaway) and Paxton Riggs (Ejiofor), a married couple whose marriage had already disintegrated before the lockdown but who are nevertheless forced to continue to cohabitate because of the lockdown. They bicker. They complain. They mope. And while it’s not a reflection of Hathaway or Ejiofor (both of whom I like immensely), the characters are beyond grating, exactly what one might expect of characters written in a couple of weeks on a dare, and who are not given a second-draft to make them … interesting, or amusing. They’re just a series of complaints.

It’s easy to understand, however, why their marriage is falling apart. If they get on each others’ nerves half as much as they get on the nerves of the audience, it’s a miracle that their relationship managed to survive as long as it did. Constrained by the lockdown, however, they’re given little choice but to interact, which is really to the detriment of everyone involved. The effect is less escapism and more suffocation, as though we are trapped inside the apartment with them, as well. He reads poetry! (Ugh) She stress smokes! They’re insufferable!

But also, Paxton is an out of work delivery driver (a job he was reduced to after a felony conviction for assault), and Linda — what a name to give Hathaway! — hates her job, which has something to do with marketing and emerging markets, and which also required that she furlough a number of employees over Zoom. After bickering for 90 minutes, the two hatch a plan to steal a diamond from Harrods and go their separate ways, but the act of doing so also rekindles a spark, although it is not evident from the film. Hathaway and Ejiofor have the chemistry of very attractive statues forced to stand next to each other and stare at one another glumly for all eternity.

I like the idea of Locked Down, and all the intentions behind it were good. It would be fun to make a quick and dirty Mr. and Mrs. Smith set during the lockdown as a sort of fun way to document the era and provide two hours of amusement. But there is no energy here, and we’re 10 months into it, and I don’t think any of us are excited to see our lockdown misery reflected back at us. It’s not entertaining, it’s just another reminder of the emotional toll this neverending pandemic is taking on us. And now I need to stress smoke.