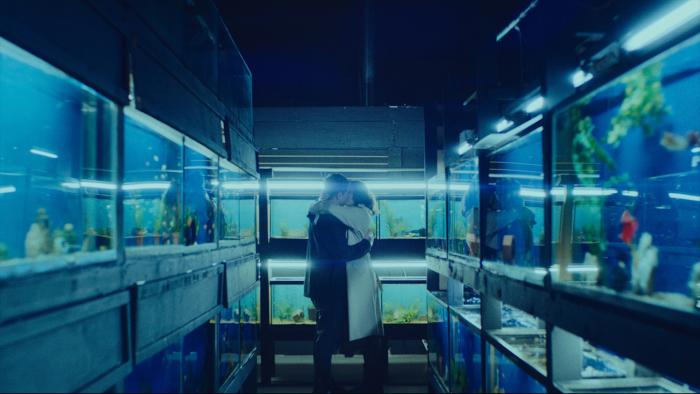 Review: ‘Little Fish’ Is an Aching Romantic Drama with a Pandemic Twist That Hits Too Close to Home

In the very near future, Jude (Jack O’Connell) and Emma (Olivia Cooke) are newlyweds ready to start the rest of their lives together. Their brief moments of bliss are harshly interrupted by the spread of a fast-moving and incurable disease. Neuroinflammatory Affliction, also known as NIA, causes people to lose their memories. For some, it strikes in a flash and leaves them totally bereft of their former selves. For others, it chips away at their mind, bit by bit, forcing them and their loved ones to watch the slow and painful decline. Jude ends up suffering from the latter, meaning that he and his wife must navigate the torture that has quickly inflicted huge swaths of the population.

There’s never exactly a great time to watch a movie about a global pandemic. It’s not the kind of entertainment you want to curl up with on the couch and escape into fantasyland. For obvious reasons, watching Little Fish right now proved to be a very curious experience. It certainly added a new sense of urgency to this quiet story that sought to avoid the dramatic tropes and expectations of similarly themed narratives. We’ve all found ourselves trying to grasp a new normal in a world devastated by a seemingly inescapable cycle of disease, death, and government ineptitude. Not one of us will come out of the COVID-19 pandemic unscathed. It has impacted us all in some way but trying to reconcile our personal trauma with the wider picture is an arduous task that few of us are truly prepared for. There’s a moment in Little Fish where Emma says, ‘When your disaster is everyone’s disaster, how do you grieve?’ It’s a moment that hits very close to home, and it’s at the heart of what makes this film so achingly good.

Don’t come to Little Fish expecting scenes of scientists hard at work looking for a cure or focuses on the widening socio-political disasters caused by NIA. Director Chad Hartigan has chosen instead to zero in on the personal, deftly building up the love between two totally ordinary people and showing how horribly tenuous such connections can be in the face of disaster. Through Jude and Emma, we see the disintegration of worlds big and small. NIA strikes with no warning, spread in a wholly unknown manner. Bus drivers forget how to drive in the middle of working. Marathon runners don’t know when to stop. Conversations with lifelong friends end when one suddenly can’t remember the other’s names. The very things that make us who we are vanish like smoke between our fingers. It’s obviously not a subtle thing, nor is this abstract use of the pandemic themes particularly unique, but the devil is in the details, and that’s where Little Fish thrives.

Hartigan and screenwriter Mattson Tomlin (who recently wrote Netflix’s Project Power) use a mosaic narrative to show the various stages of Jude and Emma’s relationship, from beginning to multiple ends. It’s a remarkably effective way of not only conveying the full depths of their love and making the audience care but of blending theme with style. It’s a touch dizzying to follow but never incomprehensible. As Jude’s memory declines, he tries to grasp at his past with hazy what-ifs and misremembered details, shot as if through a goldfish bowl or in the blurry haze of someone who has taken off their glasses. It’s suitably dreamlike without descending into trite whimsy or indie romance cliches.

Emma works as a vet technician and spends her days surrounded by the formerly beloved pets who were rejected, abandoned, or simply forgotten about by their owners. The frantic search for a cure and access to clinical trials leads to riots and violence. The couple’s best friends deal with a more aggressive version of NIA. This isn’t the focus of the story, however, and that may bother some viewers, since it’s not really shown how living with NIA impacts one’s socio-economic security. Money doesn’t seem to be an issue for Emma and Jude, whose Seattle apartment is the stuff of Instagram dreams. Accept this story as one of metaphorical force more than literal analysis.

It’s greatly helped by two striking lead performances. Jack O’Connell started off his career by playing a lot of tough guys and delinquents — the unfortunate fate of most working-class British actors — but he’s more than proved himself in gentler roles. Here, he slides between charming and scared, frustrated and lost, confused and lucid. Whenever he forgets a small detail of his past life, we feel it palpably. It also helps that he and the wonderful Olivia Cooke, fresh from Sound of Metal, have great chemistry and their relationship feels lived in. As Emma does everything to hold her marriage together in the face of a guaranteed tragic ending, we feel the loss as sharply as she does. Both actors have been primed for much bigger things for a long time now (Cooke will star in one of the many planned Game of Thrones spin-offs and O’Connell is doing a TV series with Andrew Haigh and Colin Farrell) but this low-key little film remains a perfect platform for both.

Little Fish asks how do we as individual beings quantify our pain and trauma when everyone else is going through the same thing. It’s certainly a question that hit me hard while watching the film. This obviously isn’t a direct analysis of our current situation, but viewers will certainly feel the full force of Emma’s queries. I know a lot of us have tried to find ways to deal with our isolation and fears while feeling guilty for even doing so when so many others have it far worse. Pandemics are built on the loss of one person after another, and Little Fish boils that down even further: the loss of one person is built on the dissolution of a mind, piece by piece. If nobody else is around to remember who you were, if nobody can physically remember anything, what does that mean for our existence?

Little Fish premieres in theaters and on VOD on Friday, February 5th.

← Will Smith and Kevin Hart Will Star in a 'Planes, Trains, and Automobiles' Remake | Now on HBO Max: 'Earwig and the Witch' Is The Latest From Studio Ghibli →