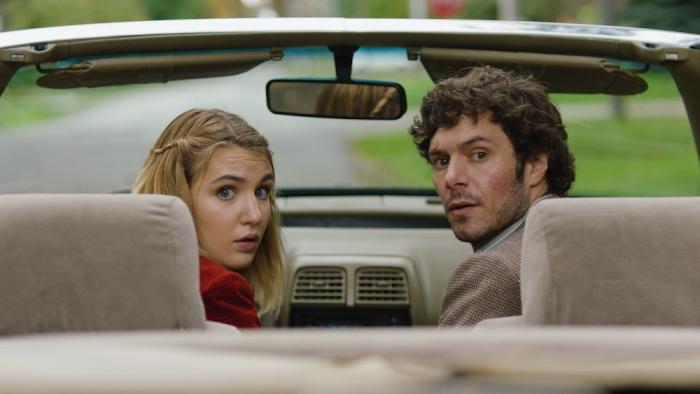 Now on Digital and DVD: 'Kid Detective' Has Some Real 'Zero Effect' Energy

In Evan Morgan’s feature directorial debut, Kid Detective, Adam Brody basically plays a burned-out, 32-year-old version of Encylopedia Brown. As a child detective, he found considerable success in solving low-level crimes. He was celebrated by his town, given the key to the city, and even offered free ice cream for life by a local ice-cream parlor.

As an adult, however, Abe Applebaum is a glum, past-his-prime private detective still trying to scratch out a living while solving the same kinds of missing-cat crimes that characterized his childhood. The novelty has worn off, like a child prodigy with whom the rest of the world has caught up. It’s no longer cute, and for Applebaum—who lives with a roommate and has to borrow money from his parents—it’s a largely depressing existence in which he continues to partake in the goods of the now exasperated owner of the ice-cream parlor. He is also occasionally beaten up by kids he ratted out in middle school.

Things started to unravel for Applebaum when he was a teenager and a classmate went missing. The town pinned all their hopes for solving the case on Applebaum, who was a kid and appropriately not up to the challenge. The case—and the burden the town put on his shoulders—had been weighing on Abe for two decades, when the girlfriend of a 16-year-old approaches Abe and asks him to investigate the mysterious murder of her boyfriend. She can’t afford to pay him, but Abe nevertheless takes on the case for one very simple reason: It’s an adult case, and therefore an opportunity for Abe to be taken seriously.

That’s the enticing setup for Kid Detective, which largely follows through on the potential of the premise. Evan Morgan seems as though he was influenced by the best: Jake Kasdan’s Zero Effect, Rian Johnson’s Brick, and there’s even some Shane Black energy here. The result is a droll, subversive crime caper. Brody, who has long been a reliable supporting presence as a douchebag in movies like Promising Young Woman, Jennifer’s Body, and even Thank You for Smoking, turns in a much more layered performance here as a wry, sad-sack loser for whom we can’t help but root. I heard Brody on a podcast a couple of months ago say that Kid Detective is the best thing he’s ever done. He’s not wrong, and that’s not an insult.

Morgan’s script is clever and takes a darker turn than one might expect. It’s a challenging tone to nail, somewhere between the childlike whimsy of Hardy Boys and the harder edges of Sam Spade, but Morgan successfully navigates that line while developing the character and efficiently telling the story. (It’s briskly told in an hour and 37 minutes!) There are some great supporting performances, too, from Wendy Crewson and Jonathan Whittaker, who play Abe’s parents, to Sarah Sutherland, who plays Abe’s Aubrey Plaza-esque assistant.

If there’s one weakness to Kid Detective, it’s the soundtrack. And it’s surprising how much it ultimately matters. It’s not that the song choices are bad; it’s more that Kid Detective is the sort of film that could benefit from a strong, familiar song—something Violent Femmes-esque—although I am guessing that budget was a factor (it’s a small Canadian film). Films like these tend to have a signature song, and that’s not the case here, although there were a number of opportunities to introduce one.

Still, Kid Detective is one of the better films I’ve seen in the last year, and if a few more people are exposed to it, it has a real shot at becoming a minor cult hit. It’s that kind of film—subversive, funny, dark but not bleak—that would make it enjoyably rewatchable for years to come.

The Kid Detective is now available on Digital, DVD, and Blu-Ray.