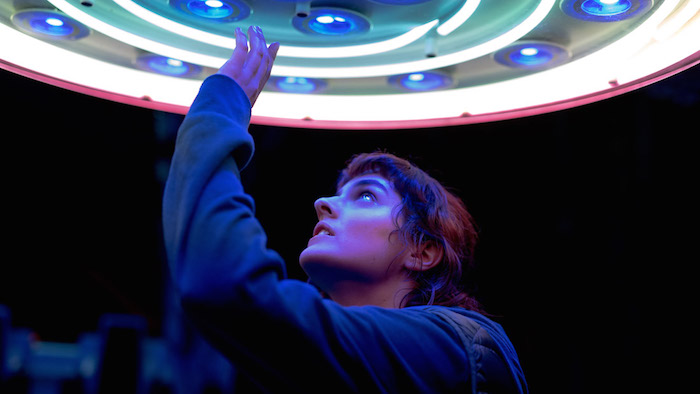 Now on VOD: 'Jumbo' Offers A Rollercoaster Romance In The Literal Sense

Portrait of a Lady on Fire’s Noémie Merlant fronts this French romance as Jeanne, an introverted young woman who has always felt more comfortable tinkering with gadgets than flirting with boys. Her mother, Margarette (Emmanuelle Bercot), urges her constantly to give love a chance. Or at the very least give sex a go! So, when Jeanne says she’s found a lover at her job at the local amusement park, her lusty mum assumes she means Marc (Bastien Bouillon), the boss who’s been very forward in his interests. Tensions rise as mother and daughter face-off over what love should/could look like, while each seeks a romance of her own.

Jumbo’s inspiration comes from the oft-derided “objectophilia,” a sexual or romantic attraction to inanimate objects. You might remember when a woman marrying a rollercoaster sparked a slew of gawking headlines. But have you ever considered what it was she felt? Wittock has.

Through Jeanne, she explores forbidden love with empathy, passion, and texture. Great importance is put upon the sensation of discovering Jumbo. The thrill of a flirtatious flicker of a bulb in the dark park after hours. Jeanne’s ruddy fingers tracing his hard rivets. His lights embracing her in washes of color. When she trusts him for an intimate ride, her pleasure is orgasmic. Then comes the fluids. Forget sweat or c*m. Jumbo’s excitement oozes black oil, which caresses Jean’s flesh gently yet ravenously. Wittock reimagines human sex through mechanical substitutions, creating a thoughtful visual language that allows audiences not only into Jeanne’s head but also the titillating rush of this romance.

Wittock focuses so intensely on the feeling of this love story, that the story itself is pretty thin and predictable. Here is a shy outcast, hesitant to engage in the conventions of romance. Then, a tall, striking stranger wins her over. But her family disapproves. A more socially acceptable man creates a love triangle complication, even though he has not her heart! So, will love conquer all? Will she have to choose between the literal object of her affection and the love of her family? What future can these two forbidden lovers spin for themselves?

The predictability actually works in favor of Jumbo. It presents the misunderstood concept of objectophilia in a conceit familiar enough to find some common ground with those confounded. From there, this safe structure allows Wittock and her cast a space to build emotions, raw and messy and magnificent.

Merlant has the toughest challenge, playing opposite a machine for much of her most pivotal moments. Yet she comes alive as she did in the lesbian romance Portrait of a Lady on Fire. At first restrained, then as passion overwhelms her, blossoming in grins and vulnerability into a vision of love unapologetic. Bercot proves her perfect foil. Where Jeanne is shy and socially awkward, Margarette is brash and forward. With a crooked smile and a twinkle in her eye, Bercot constructs a mother who is vivacious, vexing, and trying her best despite having very little in common with the daughter she adores. Bouillon brings a sparking toxic masculinity as the aggressive wooer, Marc. Sam Louwyck plays his foil, Margarette’s new beau Hubert. Older, mellow, and bedecked with a noble salt-and-pepper beard, the blue-collar man’s man seems like he might be gruff and narrow-minded. But in his penetrating gaze, Jumbo finds a sensitive sage and Jeanne finds an ally.

In the humble setting of a modest amusement park, Wittock builds a world of wonder and explosive passion. Her keen eye and emotional intellect manifest a movie that is slick, sexy, stylish, and nakedly humane. Merlant is radiant as a woman lit up by love. Her supporting cast clicks smartly to create a dance furious and heartfelt, spinning from devotion to rejection, outrage to embracing. All this makes for a film that is jubilant, cerebral, and brazenly hot. Simply put, Jumbo is an exhilarating ride that shouldn’t be skipped.

Jumbo opens in select theaters and virtual cinema on February 19, on VOD and DVD on March 16.