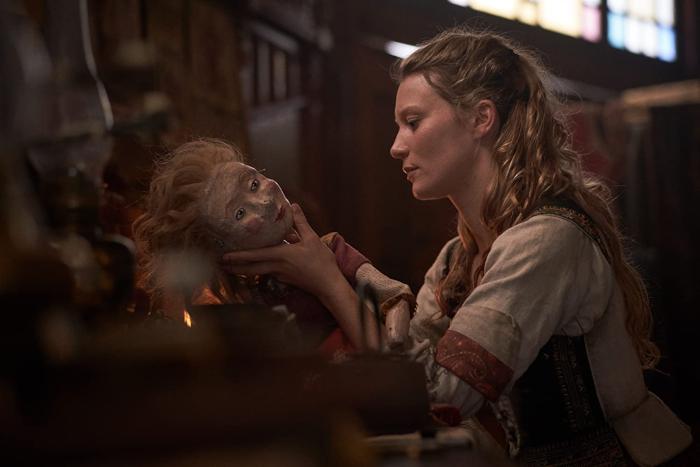 For centuries, Punch and Judy puppet shows captivated audiences with violent misadventures of a family man who batters his wife and their baby with a “slapstick” or some other twisted tool of torture. For her directorial feature debut Judy and Punch, Australian actress turned writer/helmer, Mirrah Foulkes, flips the focus, turns the tables, and rewrites this typically misogynistic narrative into a fairy tale of feminist revenge.

Set in the scuzzy 17th-century English village of Seaside, Judy and Punch begins with its eponymous heroes as puppeteers, scraping to rebuild their careers. Once, they were the toast of classy cities, spinning marvelous marionette productions that awed children and grown-ups alike. However, Punch’s habit of drunkenness and belligerence soiled their reputation, booting them back to Judy’s humble hometown. There, the only other form of entertainment is killing alleged witches by stoning, hanging, or burning them at the stake. Still, the couple makes a decent living, enough to care for Judy’s dilapidated family home, a pair of elderly servants, and their adorable baby girl. However, Punch (Damon Herriman) yearns for the spotlight and—failing that—drunken oblivion. This leads to a Punch and Judy plotline that is very familiar: He drinks, kills the baby, then when Judy (Mia Wasikowska) discovers this, he beats her to death. Well, almost.

At the end of act one, the murderous lout buries his wife and baby in a shallow grave. Then, Punch frames his servants, whose pleas of innocence and bewilderment fall on deaf ears. Punch knows the villagers love a violent show. With his wild tale of an old crone and her feeble husband eating his baby and slaying his bride, he has presented a perfect setup for a public execution. However, Judy’s not dead and she’s not done with Punch. Discovered in the woods by a batch of charismatic misfits, Judy rises in grief, fury, and determination to reclaim her life, her home, and her story.

Judy and Punch contains a lot of violence. However, Foulkes rejects the Punch-and-Judy trope of turning assaults into slapstick spectacle. She will not invite audiences to ogle a man’s attacks on his wife, child, and a sausage-snatching dog. Instead, she keeps the impact of his blows offscreen. Then, she exposes the trauma his violence has wrought through the journey of Judy, a grief-stricken mother and betrayed partner whose face is a map of agony and open wounds.

Though not graphic, this twisted tale brandishes a cutting edge of dark humor that bleeds violence into dialogue jaunty and jarring. Villagers gleefully wish each other “Happy Stoning Day,” and Punch confesses to infanticide with shocking blitheness: “I accidentally dropped the baby out the window. Anyway, what’s done is done. Best we just move on with our lives.”

Foulkes’ incredible ensemble delivers such lines with a sharp and scruffy theatricality reminiscent of Terry Gilliam movies like Time Bandits and The Brothers Grimm. In this way, Foulkes works an unnerving verve into her film while elegantly revealing how this grim village regards violence against women and children.

To underline the depravity of Seaside, she coats its residents in a funk so thick you can practically smell them. Each is smeared in sweat, muck, sh*t, and blood, making clear what a festering pit they are creating with their cruelty and witch-hunting. Then, a stark contrast is offered by the heretic camp where Judy wakes up. There, costumes are distinctive and beautiful, looking like post-modern cosplays of fantasy figures. Its outcasts—like Dr. Goodtime and Sartorial Alice—bind together to create a community that cares, embraces difference, and detests senseless violence. Together, they live, dance, and thrive.

In case all that isn’t enough to get the film’s point across, Judy jumps onto a literal stage to deliver a rousing climactic monologue. “You call us witches,” she sneers, “But what is a witch but a person who sits just outside your blinkered view of the world?” As such, Judy and Punch’s political messaging is about as subtle as a slapstick to the skull. However, perhaps such spoonfeeding is warranted considering not only the long tradition of Punch and Judy shows and popularity of similar entertainment, but also a never-ending barrage of news headlines that remind us of the intolerance and cruelty of Seasides around the world. Perhaps we deserved to be lectured like children.

All in all, rich with idiosyncratic style, macabre wit, riveting energy, and performances both playful and perturbing, Judy and Punch really packs a punch.

Judy and Punch is now on digital.