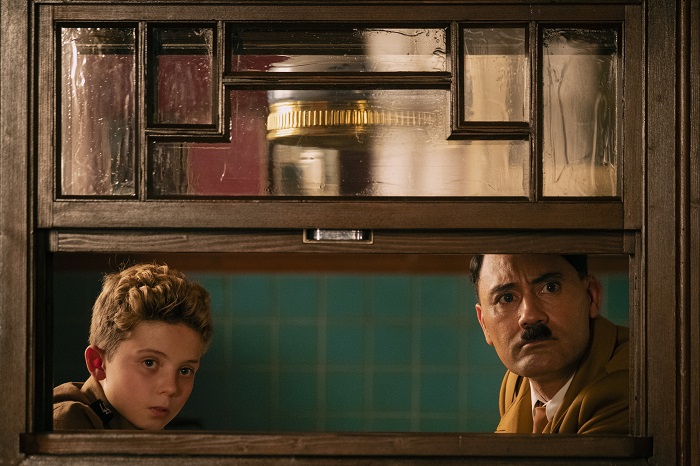 Satire is a tricky thing: It requires laser-sharp focus, a purpose for mockery, and a point of view that brings something fresh and new to the understanding of its subject, and to why it should be so venomously mocked. Mike Judge got it right with Idiocracy and Office Space but has increasingly lost the thread with Silicon Valley; Stanley Kubrick’s Dr. Stangelove and Mel Brooks’s Blazing Saddles have withstood the test of time because their respective analyses of the American military-industrial complex and racist bureaucracy are so strong. Filmmaker Taika Waititi’s Nazi-ridiculing Jojo Rabbit goes childish with how it pokes fun at the Nazis—their clothes, their inefficiency, their stupidity—and sometimes that broadness works. But it’s an uneasy balance between that “Look at these idiots” mentality and the film’s more conventional “Learn to love each other” arc, which has moments of grand emotion but overall feels disappointingly familiar. 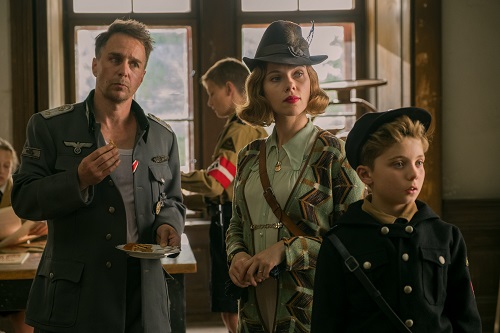 Jojo Rabbit, Waititi’s adaptation of the novel Caging Skies by Christine Leunens, is set years into World War II. German soldiers are coming back from the war bloodied, bruised, and wounded. Food is running out. Dissenters are hanged in the village square. And yet 10-year-old Jojo (Roman Griffin Davis) is as gung-ho as can be about the war effort: He’s proud to call himself a Nazi, to wear a uniform and carry a government-issued dagger, and to imagine his best friendship with Hitler (played by Waititi himself). A lonely boy whose father is allegedly fighting in Italy, but has been missing for two years, and whose mother Rosie (Scarlett Johansson) is increasingly absent, Jojo fills the adult void in his life with a goofy, wisecracking, bro-y version of Hitler. “You can heil me better than that,” Hitler negs him; “Do you even speak German?” he jokingly asks. Hitler is self-centered, narcissistic, and obsessed with Jojo, and Jojo, in turn, is nearly a zealot with his support of the Nazi regime.

When attending a Hitler Youth camp run by the injured Captain Klenzendorf (Sam Rockwell, taking another step away from the dude who used to dance all the time and toward the dude who only plays racists), Jojo realizes that he is different from other kids who also call themselves Nazis. They revel in burning books. They readily chant “Kill” and are excited to take a life. Jojo, although he loves putting on the Nazi uniform and the feeling of closeness it provides to other kids his age and to his countrymen, can’t quite push himself that far. He’s still just 10 years old, and he’s not yet ready to murder anything. He’s not that corrupted yet—although he wants to be.

Jojo’s desire to be accepted, and how he links that in his mind with being the “bestest, most loyal little Nazi I’ve ever met,” as he imagines Hitler saying, puts him at odds with mother Rosie, who is open about her hatred of the war. When Jojo learns a secret about Rosie, his entire political ideology is thrown into question. What if Jews aren’t really demons who obsess over gold, who hang upside down from the walls, who can read and control other people’s minds, who were bred of humans and fish? What if the Nazis are all uninformed, ignorant, brainwashed followers of a maniacal, temperamental leader? As Jojo’s feelings begin to change, his imagined version of Hitler changes, too, until the boy has to make a decision that might irrevocably alter his understanding of himself and his own identity.

Jojo Rabbit leaps and jumps between different tones, and the shifts here aren’t as graceful as they could be. Certain characters are purely presented as savage caricatures, like Rebel Wilson’s Fraulein Rahm, who gestures to her own body and boasts of having had 18 children for Germany and later shares a story about how her incestuous, idiotic uncle destroyed his own life—but only because a Jew brainwashed him. But others, like Rockwell’s Captain and his sidekick, Alfie Allen’s Finkel, are provided a more sympathetic depiction. The two of them caring for each other as lovers, leaning in for a kiss, and then parading around in sequined capes is not caricature, exactly, unless it’s meant to be funny that the Nazis might have been gay? The same goes for Waititi’s Hitler, who is a flamboyantly absurd, foot-stomping brat, obsessed with whether he looks fat in his uniform (the movie leans a little too often on “fat = funny” humor) and why Jojo’s attention is swerving away from him. Some of that mockery is ludicrous enough that it lands, but the movie fails in balancing it well with its dramatic content, which has more emotional power.

I wish Johansson didn’t say such small-minded things in public because it is infuriating how fantastic of an actress she is; her Rosie is by far the most well-rounded character here, and a scene where she pretends to be her husband and confronts Jojo about how badly he is treating her is staggeringly good. The movie demands that Rosie careen between affectionate and regretful, concerned and joyous, and Johansson handles those whiplash tonal shifts with grace and ease. Her tying of Jojo’s shoelaces is a gesture of her deep, unparalleled love, and the moment when he attempts to return that gesture for her is the film’s best sequence. In a role I won’t spoil here, Thomasin McKenzie is exquisite, demonstrating the same mixture of fragility and steeliness that she had in Debra Granik’s underrated Leave No Trace. She has a lovely chemistry with Davis that elevates a familiar-to-this-genre dynamic. 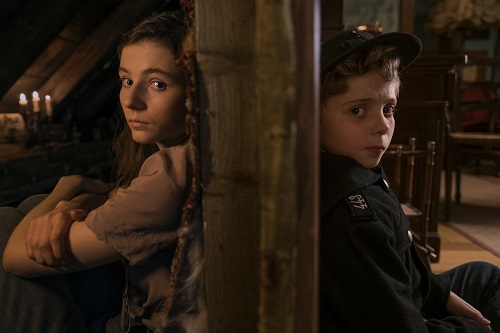 I suppose that’s my primary issue with Jojo Rabbit: For all its satirical posturing, it resorts to a dramatic structure that still centers a redemption story, and within that redemptive arc, still provides a moment of heroism for another member of that oppressive group. Despite a strong supporting cast, a fantastic soundtrack (including David Bowie’s “Heroes,” the best song of all time), and some moments of unshakable tragedy, Jojo Rabbit is far more conventional than I would anticipate for a Waititi project, and left me wanting more.

Jojo Rabbit is playing in limited release around the U.S. and expands everywhere on Nov. 8.