I went into Copshop with no expectations whatsoever. Oh, that’s not fair. I went in with outright negative expectations. I already had to endure one Frank Grillo st(r)eaming special amidst this pandemic. I mean, look at this poster and tell me that’s not a straight to VHS release from 1996: 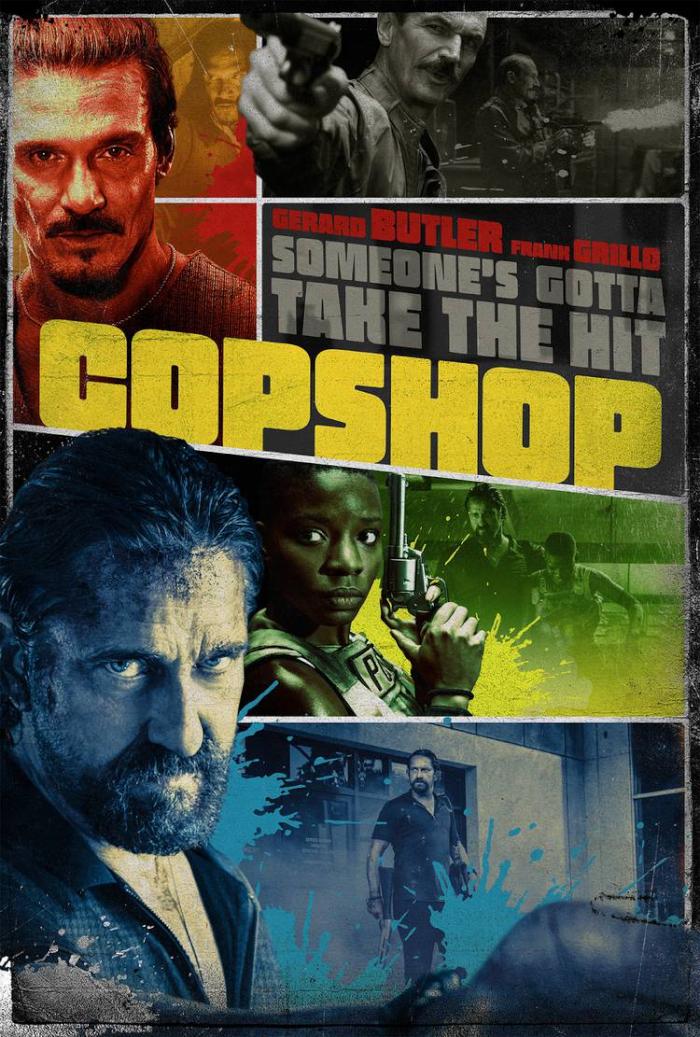 And what’s with the title? Is it a play on ‘chop shop,’ i.e., a horror movie where they use officers of the law for spare parts? Or referencing some sort of store where one could purchase police officers like candy out of a bin? Neither. Call me old-fashioned, I just think titles should have the slightest thing whatsoever to do with the contents of the movie on whose opening credits they appear.

[listens to earpiece for a moment]

Well, after all that, it’s astonishingly good. It’s a tightly written bit of ultra-violence that doesn’t take itself too seriously even while racking up a double-digit body count. The setup ain’t exactly Shakespeare: Mob-hunted Teddy (Frank Grillo) gets arrested on purpose to hide from hitman Viddick (Gerard Butler), who ALSO gets arrested on purpose to follow him into lock-up. Bloody mayhem ensues.

The movie’s anchored by those two, but it’s a clever turn in that they’re locked up arguing for half the movie while most of the action goes on without them. Frank Grillo is at his most not Frank Grillo, in a three-piece suit, complete with man bun and snakeskin boots. He looks like he’s cosplaying as an over-the-hill gigolo and oozes slimy charismatic charm all over the scenery. Gerard Butler is in that sweet spot of his where he’s greasier than a taqueria’s dumpster but also psychotically gleeful.

It’s a bottle episode of a movie, almost entirely constrained to the interior of a sprawling Nevadan police station that vibes as a community college more than Precinct 13. Twenty years into the war on terror, the security state has discovered glass walls and open-concept offices.

Stories crammed into enclosed spaces need to have particular attention to detail because we’re shown the same rooms and items over and over again. And Copshop is no The Usual Suspects, but it knows enough that when a police sergeant buys his daughter a gun from a hamburger truck in the first act, Walter Koenig better be dealing lead in the third act.

That tight writing pays off by making for a consistently darkly funny movie even as it’s telling no jokes. I don’t think Chad Coleman utters a non-profane word other than a sprinkling of prepositions. I could listen to him yell at motherfuckers all day. Butler’s Viddick meticulously irritates every single other character by addressing them as their full names even after repeatedly being told at gunpoint not to (Teddy is Theodore, Tony is Anthony).

The key is that every single character feels fully developed and motivated, even when they just have a couple of otherwise throwaway lines. By the time the dude (Toby Huss) who voiced Cotton Hill on King of the Hill shows up with a submachine gun and a delivery of balloons, with all the mannerisms of a soccer dad trying to find his minivan at a mall, and starts singing, you get the sense that Joe Carnahan’s primary direction to the actors, set designers, and costumers was to ask themselves what Nic Cage would do, and then do it harder.

And I’ve saved the best part of the movie for the end of this review. Despite not even having her name on the poster, Alexis Louder’s Val is one hundred percent the protagonist of the film. Surrounded by dudes who have made their entire careers in action movies, she doesn’t just hold her own, but steals every single scene she is in. She has a riffing and sparring chemistry with every other actor — as a sign of respect, Viddick calls her Valerie and then corrects it to ‘Val’ at her glare. Louder perfectly nails that droll action hero gunslinger swagger.

Copshop is a fantastic, entertaining-as-hell action movie. Definitely watch it if you can.

Copshop is available in theaters as of September 17, 2021.

← Even Hit-Monkey Gets a Hulu Show?! | A Look Back At The Greatest Performance Of Jean Smart's Career: Pickles Oblong from 'The Oblongs' →