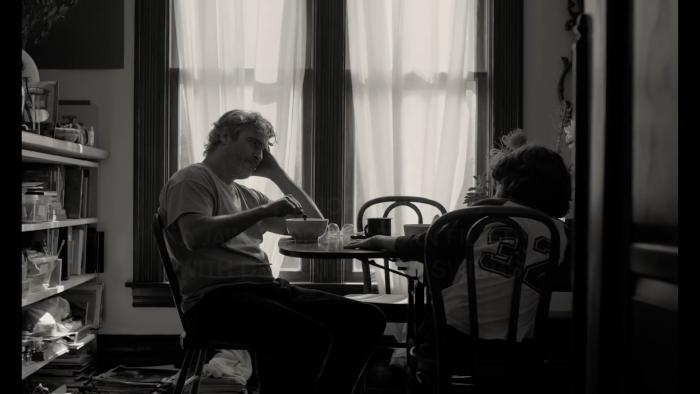 Review: ‘C’mon C’mon’ Will Make You Hope for a Better Future (and Wish That Joaquin Phoenix Had Won His Oscar For This Movie Instead)

Children are our future, but will they thrive in the world us adults leave behind for them? What are they scared of? Do they think that things will be better or worse? These are some of the lofty questions that Johnny (Joaquin Phoenix), a public radio journalist, is asking the kids of America for a new show. While working in Detroit, Johnny receives a phone call from his estranged sister Viv (Gaby Hoffman.) She needs someone to watch her nine-year-old son Jesse (Woody Norman) while she travels to care for her ex-husband, who is struggling with mental illness.

Director Mike Mills has made a fascinating career out of dissecting his own life. Beginners was inspired by his father coming out as gay towards the end of his life. 20th Century Women contextualized his mother’s time as a parent and independent being at a time of immense cultural and historic flux. He’s been quick to dismiss easy parallels between C’mon C’mon and his own child, positioning the narrative as a more existential concept than autobiographical. Thinking about your relationship with your own kid is one thing, but how do you, a parent, deal with the sheer unbearable weight of that responsibility for generations of children? You may not be actively thinking about their futures every single moment of the day but it’s always there, pressing at the back of your mind.

Johnny and his team’s interviews with these children, often in their own homes, offer glimpses of a checkered future. Many of the kids seem cagey, unable to answer these admittedly grand questions in a way that makes sense or feels real. As one adolescent girl jokes, how is she supposed to have it all figured out when she’s still technically a child? Such moments are more an enhancement of the central narrative than the focus. While Johnny travels from Detroit to New York to New Orleans to ask children of all backgrounds about their lives and hopes, it is in the day-to-day mundanity of parenting that he comes to understand the true force of this duty. His nephew Jesse is a sweet, eccentric, and often very sad little boy who is more aware of his familial strife than any of the adults around him seem to understand. He pretends to be a Dickensian orphan with his own mother when he needs to be more emotionally open. While he’s capable of moments of immense maturity, sometimes he just wants to throw a tantrum and let off some steam like any normal nine-year-old. He runs off, berates his uncle, demands the most obnoxious toothbrush from the store, and seldom wants to sleep in his own bed. All in all, he’s your standard kid, so of course his childless uncle with his own well-built emotional walls isn’t ready to be in charge. It’s a credit to young Woody Norman, who easily gives the best young performance of 2021, that Jesse feels so familiar rather than descending into the ‘quirky magic kidult’ trope that usually plagues such stories.

This set-up is painfully familiar, a narrative we’ve seen in way too many cloying family movies where a mismatched adult-child pairing learns the right lessons from one another after a series of shenanigans. It seems to be a recipe primed for unbearable saccharine sweetness and unearned emotional payoffs, but if there’s any filmmaker who could soar over such low expectations, it’s Mike Mills. Through his prism, parenthood is an invitation to ceaseless vulnerability, a forceful opening of your innermost emotional and mental quandaries. Doing so can be an immense gift but then there are days when you just want to throw in the towel and let the little sh*t go their own way! It’s an endless circle of pitfalls for Johnny, an uncle who hasn’t seen Jesse for over a year and typically has the privilege of handing the child back at the end of the day.

Shot in textured black and white cinematography courtesy of Robbie Ryan, there’s an elegiac quality to C’mon C’mom amongst the familiar mundanities of life. Dishes need to be washed, bedtime routines need to be stuck to, and endless meandering conversations about absolutely nothing must be tolerated. At one point, Johnny exhaustingly records his nightly diary, noting how tired he is while Jesse decidedly isn’t. The almost shell-shocked look on his bedraggled face says it all. Viv offers solutions to tizzy fits and sugar rushes but even she admits that it’s impossible for her to know what to do as a mother. To steal a joke from The History Boys, it’s just one f**king thing after another.

A lot of reviews of C’mon C’mon have stressed how this Joaquin Phoenix performance is so wildly and unexpectedly different from his previous work. While it is true that Phoenix’s most well-known characters tend to be more abrasive, splintered, more evidently chaotic than not, he’s turned in more than his fair share of tender and unabashedly human performances too. Consider the romantic if emotionally stunted Theodore of Her or the suicidal Leonard, a man desperate to find a route out of his crushing loneliness, in the underrated Two Lovers. Hell, even his turn as the perennially stoned P.I. in Inherent Vice (possibly my favorite performance as his) is rooted in that brand of quiet contemplation, albeit through a haze of pot. In C’mon C’mon, he’s a level of appealing that feels almost radical, so cozy in a way that his Oscar-nominated, mainstream-approved work is seldom able to reach. Let’s just pretend this is his Oscar-winning performance and not that one in the clown suit, OK?

He’s still using all of the tools that made those frenzied performances so compelling. I don’t think there’s an actor alive who uses his posture as intriguingly as Phoenix does. Rather than stretch himself into pretzel-like agony as he did for Joker, he slumps his shoulders, embodying the fatigue of a 40-something guy who spends a lot of time at a desk and ignoring advice on sitting up straight. Johnny can crack a joke and play the role of a regular guy but mostly he seems curled up into a ball, fatigued and low-level sad for most of the day. It’s a shame that this performance isn’t getting the awards attention that Phoenix got for those more unhinged roles, another reminder that the industry has no idea how to respond to subtlety in this vein. Credit must also go to Gabby Hoffman, the forever-underrated actress, whose work as Viv is as organic and lived-in as Phoenix’s (it’s also strange that it’s taken this long for a director to cast the two former child-actors as siblings given their startling resemblance.)

C’mon C’mon is a gentle affair but a deeply considered one, with Mills understanding the crucial balance between sweetness and tough love. This is a story that hopes audiences will leave the theater with a revived willingness to be kind. It’s a major hope, especially since our own offspring seems less than optimistic about what is to come, but C’mon C’mon thinks it’s worth believing in.

C’mon C’mon is now in theaters.