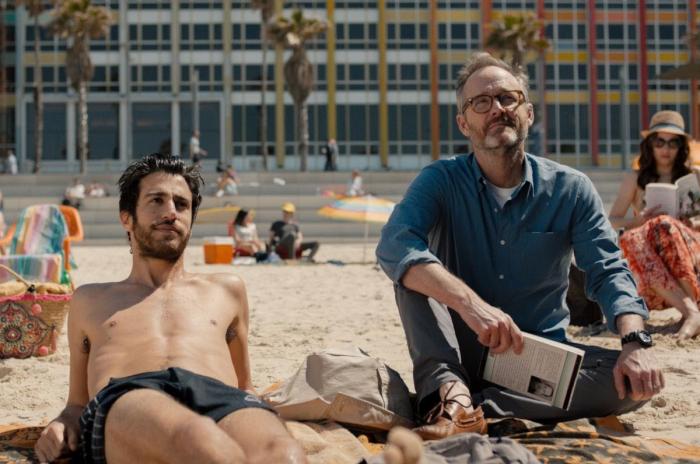 Review: ‘Sublet’ is a Gentle Romantic Dramedy About the Gulf Between Old and Young Queer Generations

As a consumer of queer cinema for nearly three decades, it’s been a pleasure to see the evolution of films tackling the LGBTQIA experience. When I grew up watching gay films in the ’90s, it was nearly always sensational festival films tackling either coming out/hustling stories or AIDS dramas. Thanks to the expansion of streaming sites and alternative platforms, the diversity of stories has blossomed to the point that it is now possible to tell small, elegant stories like Sublet, the new film by Israeli director Eytan Fox.

Michael Green (John Benjamin Hickey) is a New York Times travel writer who arrives in Tel Aviv for a five-day stay. As part of his column’s mandate, Michael eschews hotels in favor of a sublet apartment in order to get a feel for an authentic (read: non-tourist) perspective. The apartment in question belongs to twenty-something film student Tomer (Niv Nissim), but their introduction gets off to a rocky start when Tomer is unprepared for Michael’s arrival.

The disparity in the lived experience of the two men is immediately apparent. Michael is fussy, uptight, and closed off. (He travels with pressed button-up shirts that are still wrapped in tissue paper). Tomer, on the other hand, is casual, but surprisingly emotional and prone to giving his unsolicited opinion.

The narrative kicks in when Michael invites the displaced Tomer to stay on the couch in exchange for playing tour guide. Sublet then follows the men as they get to know each other over sightseeing trips, food, and conversation.

One of the strengths of the screenplay, co-written by Fox and Itay Segal, is the languid pace at which everything unfolds. Like Michael’s process for writing his article, Sublet is content to immerse its audience in a measured five-day travelogue around the city. The film is in no particular hurry to reveal its characters’ backstories or even introduce a substantial conflict. Instead, this is a work of gentle drama; the quiet moments and interactions between the two men comprise the bulk of the film’s run time, with the occasional appearance from a peripheral group of supporting characters that includes Tomer’s fiery, opinionated best friend Daria (Lihi Knornowski) and his nurturing, empathetic mother Malka (Miki Kam).

Sublet is less concerned with the cultural differences between Americans and Israelis than it is with the age gap between Michael’s older generation and Tomer’s more youthful perspective. The pair’s sometimes playful, sometimes pointed disagreements unfurl naturally over meals, on the beach, and on the couch; topics range from sex and monogamy, travel, religion, film, nostalgia, AIDS and, finally, parenting. Naturally, as is often the case in films focused on unlikely friendships, Michael and Tomer eventually learn to appreciate and even adopt the attitudes of the other as part of their own development and growth. This includes a burgeoning level of intimacy that tiptoes around a possible romantic connection.

One of the most memorable scenes occurs after Michael has had a fight with his partner, David (Peter Spears). The incident is new and specific, but at its heart, their disagreement is rooted in a lack of communication and trust. Michael and Tomer then attend Daria’s dance performance with her Palestinean boyfriend (Adi Boutrous), which literalizes the combative push and pull of the relationship (between the two countries, as well as within a romantic couple) through a series of repetitive motions. Fox’s camera settles on Michael’s face in the background as he watches, tears streaming down his face. It’s a wonderfully quiet and powerful moment that bridges the gap between Michael’s experience within the world of the film and our experience watching him.

The use of cycles and repetition is a crucial component within the structure of the film. Sublet opens with a slow tracking shot as Michael stands on the moving sidewalk of the Tel Aviv airport and ends with the reverse as he heads home. Title cards introduce each day. Repeat trips to a high-end bakery play a significant narrative role and there are multiple conversations about the role and function of art. These repetitions and cycles reflect how Michael and Tomer are growing closer through similar shared experiences while reinforcing that life affords us multiple opportunities to try and fail and try again (at love, at parenting, at making a connection).

At one point Michael watches Tomer’s current project, an amateur horror film with supernatural Giallo vibes, and they get into a disagreement about its impact. Tomer declares that he only wants to make films that inspire emotions because he wants his audience to “feel” something. Tomer also dismisses Michael’s love of romantic comedies and musicals because they are “happy and cheesy and gay.” (An argument could be made for both the contemporary interpretation of the phrase, as well as the old Hollywood saying).

The discussion about artistic impact and genre is a subtle metacommentary from the filmmakers considering Sublet is itself a romantic dramedy. Segal and Fox’s script has a deliberate will they/won’t they playfulness, right down to the five-day countdown that acts as a ticking clock for the men to act on their feelings. Hell, it even ends with a dramatic confession in the airport - all tropes of the genre. In this capacity, Sublet is an (occasionally) cheesy, happy and gay film that is most assuredly guaranteed to make its audience feel something. Tomer would be pleased.

Sublet is available in select theaters as of June 11 and available for rental on July 9.

Joe Lipsett is a film critic with bylines in Bloody Disgusting, Consequence, Grim, and Anatomy of a Scream. He co-hosts the Horror Queers podcast on the Bloody Disgusting Podcast Network and also co-hosts the YA literature adaptation podcast Hazel & Katniss & Harry & Starr. He also enjoys dark beer and playing a variety of sports (badly). Twitter: @bstolemyremote

← Reddit Asks the Question: 'Women Who Have Been Proposed to and Said No, What's the Story?' | 'Cowboy Bebop' Live Action Series News: Composer Yoko Kanno Returns to Bless Our Ears →