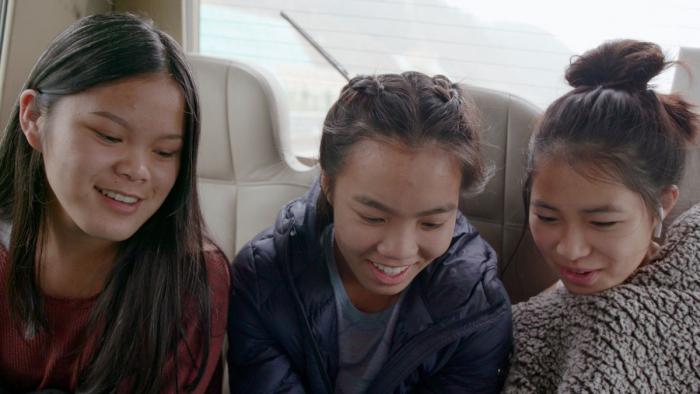 Review: In 'Found,' Three Adoptees Search for Their Birth Parents But Find Something Better

Found is a new Netflix documentary about three teenage girls — Chloe, Sadie, and Lily — from different parts of the United States (Arizona, Tennessee, and Oklahoma, respectively), all of whom were adopted from orphanages in China. The three discover they are cousins through DNA matches on 23andMe.

Each of the teenage girls lives in fairly well-off, white suburban families (the film opens on Chloe’s bat mitzvah), and each seems happy in their respective adopted homes. The three bond over FaceTime, however, and find in each other connections to a past of which they know very little, as well as kinship over their shared experiences of being Asian not only in all-white families but in predominately white communities.

Each was abandoned to orphanages because of China’s one-child policy, and each was cared for by nannies in China before they were adopted. The three girls — with the help of their families — recruit a helpful researcher named Liu Hao who aids them in their efforts to find their birth parents back in China before eventually embarking on a trip there together to learn more about their pasts.

I suspect that filmmaker Amanda Lipitz — who is also the aunt of one of the subjects — had envisioned a different narrative when she set out to make Found, one where Chloe, Sadie, and Lily found their birth parents and shared tearful reunions with them back in China. That’s not how it goes down, but in some ways, it hardly matters. Chloe, Sadie, and Lily do meet their respective nannies, who each seem to have miraculous recall of their infancies despite the 15 or so years that have passed and the many, many other babies in their care over the years. These reunions are tearful in and of themselves, in part because I suspect it’s rare that the nannies are afforded much appreciation from their former wards (“My heart ached whenever I sent a baby away,” one recalled), and also because Chloe, Sadie, and Lily are so eager to cling to any scrap of their pasts, even now that they are so far removed from it. The juxtaposition of who they once were — babies left outside of orphanages in cardboard boxes — with who they are now packs an emotional punch, even for teenagers who are otherwise more interested in talking about boys or coloring their hair. Some of these moments are likewise emotionally challenging for their adopted parents, for all the obvious reasons.

The appeal of Lipitz’s documentary is probably more specific than general, although there are a number of sweet moments, even if the experience of watching it often feels akin to looking at another family’s vacation photos. Moreover, they never find their birth parents, although Liu Hao guides them down a few dead ends, which are more heartbreaking for the potential parents — eager to find the daughters they gave up — than Chloe, Sadie, and Lily themselves, who seem mostly content to know something of their past without knowing the parents who brought them into the world. They’re happy enough to have found each other. “Family are the people who make an effort to be there for you,” Sadie writes in her English composition paper. “Perhaps some things are better to be left as fairy tales.”

Found is currently available on Netflix.