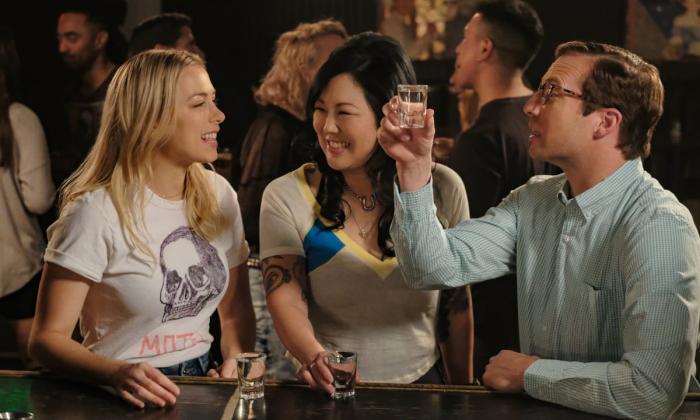 Good on Paper opens with a disclaimer that the movie is “a mostly true story based on a lie.”

Stand-up comedian Iliza Shlesinger has shared the story that inspired her leading lady debut a number of times, and it’s not hard to see why she thought it would be perfect for a movie. Like any great stand-up yarn, it’s a gossipy tale that builds and builds, with Shlesinger’s asides only adding more glee to the experience. The movie is a good primer for Shlesinger’s comedy as a whole. Having come to prominence by winning the sixth season of NBC’s Last Comic Standing, she then branched out into sketch comedy, writing her own book, and a slew of Netflix specials that made her one of the platform’s most reliable comedic voices. Imagine a fast-talking takedown of societal misogyny with a hefty side order of raunch and you’ve got part of what makes Shlesinger work. She’s got the kind of natural charisma that would translate well to a romantic comedy, another mainstay of the streaming service. It’s a shame that Good on Paper doesn’t live up to that promise.

Shlesinger stars as Andrea, a comedian who’s doing well in her local stand-up scene but is struggling to break into the mainstream. After a disastrous audition, she meets Dennis (Ryan Hansen) on the plane ride home. He’s nerdy, kind of awkward, and not at all like the himbos she usually brings home for one-night stands. Still, there’s something about him that feels comforting and appealingly normal, even if he does look like “an accountant who loves missionary.” They might be perfect for one another if it weren’t for her total lack of attraction to him. But as they become friends, Andrea begins to wonder if Dennis is really as good as he seems.

Written by Schlesinger, Good on Paper features a lot of scenes of her on the stage doing what she does best. Her work points out the double standards between socially acceptable behavior or men and women, especially in the dating scene. However, what works as a comedy anecdote cannot retain its magic for a 90-minute movie.

Shlesinger is a charismatic heroine who avoids many of the pitfalls of this kind of genre, but shoving these stories into a more traditionally structured narrative makes things feel inevitable. Shlesinger offers good lessons in her stand-up, especially regarding how women are told to accept whatever comes their way and welcome even the most unnervingly persistent men. That’s contrasted with Andrea ignoring everything she knows so that the central story can keep moving forward, culminating in a third act that cannot even begin to maintain the momentum. Yes, humans don’t always do the right thing even when we’re aware of it, but in terms of Good on Paper, the disconnect is too obvious.

Also, Ryan Hansen is too visibly off as Dennis. It is weird that savvy and self-aware Andrea wouldn’t notice that this dude is a giant flappy red flag from the get-go. It’s not just that Hansen is playing him as an obvious bad guy in waiting, but also he’s even styled as such. He’s got the serial killer glasses and everything!

One of the strengths of Shlesinger’s character here is that she’s not a “trainwreck” in the way that stories like this often demand of their heroines. Andrea works hard, is good at what she does, and doesn’t see why her party animal streak should conflict with her ambitions. She also has a smart best friend (played by Margaret Cho, with whom she has great chemistry) with zero tolerance for bullsh*t who notes frequently how weird this guy is. All of this makes it bonkers that Andrea wouldn’t know within seven seconds of chatting with him that he’s either got a basement full of clown dolls or carries around a card detailing the age of consent rules in all 50 states. Her voiceover explains how nice it is to feel wanted, but that is a thin explanation for the decision to knock Andrea’s IQ down a few dozen points for storytelling ease. Eventually, Andrea becomes the kind character that the movie is trying to subvert.

Directed by Kimmy Gatewood, Good on Paper feels trapped between two modes: broad comedy and thriller. There are moments in the second act where it’s clear that what Andrea is going through is truly terrifying and she’s overwhelmed by these realizations. There are even glimmers of suspense as Andrea tries to uncover the truth of her “perfect” man. You could easily see Shlesinger remolding this story into something much weirder and more sinister. Imagine Good in Paper in the vein of A Simple Favor or Gone Girl, diving further into the gaslighting and gender stereotypes at play.

What keeps Good on Paper watchable is Shlesinger and her chemistry with both Margaret Cho and Rebecca Rittenhouse, who plays a professional rival/unlikely ally. The trio have the most raucous moments together, especially in a stakeout scene where Cho’s character reveals vaguely murderous tendencies. By the third act, the film tries to realign its focus towards Andrea’s female friendships and herald their benefits in the face of unmitigated male bullsh*t. It’s a pleasing moral but one that doesn’t entirely work given what’s preceded it. Still, it makes for some of the film’s funniest moments in large part thanks to Shlesinger and Cho’s appealing riffing. It makes you wish they both had a better film to play around with their chemistry.

If Good on Paper has any real lessons to impart, then they’re pretty solid ones: trust your instincts. Don’t accept obvious nonsense from manipulative creeps. Never let your guard down. Pay attention to those red flags. It’s just a shame that Good on Paper doesn’t follow its own advice.

Good on Paper is now available to watch on Netflix.

← Almost Everything You Need To Know About The Green Knight | Nature's Cunning Ways: How 'Luca' & 'Call Me By Your Name' Are Healing Our Weakest Spots →