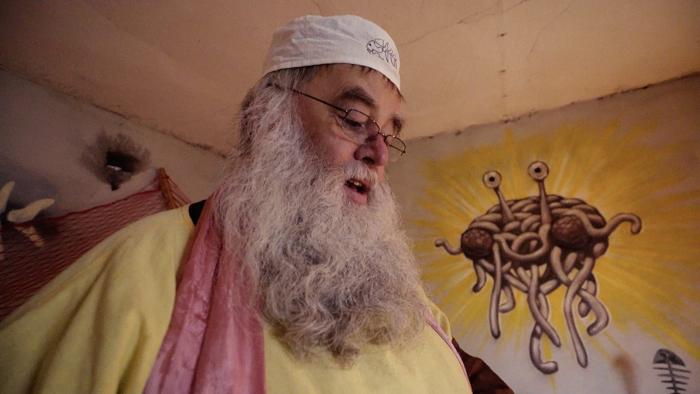 Directed by Michael Arthur, I, Pastafari: A Flying Spaghetti Monster Story follows the rise of a religious group that values pirates, pasta, and personal freedom. Their iconography and doctrine are unapologetic parodies of other faiths. Their name is an irreverent riff on “Rastafarian.” Their insistence on wearing pasta-strainers on their heads as a religious garment is compared in the film to the Sikhs’ turbans or the Muslim’s hijabs. Their rites spoof the Christians’ sacraments. Pastafarians offer a holy communion not of bread and wine but beer and spaghetti noodles. They baptize babies in pasta water, and instead of “Amen,” they say “Ramen.”

Their religious texts parody the Bible, telling of a pirate named Mosey who spoke to their god, the Flying Spaghetti Monster, and returned from this meeting with 10 rules, two of which were lost when he dropped them. (That gag comes straight from Mel Brooks’ History of the World: Part 1.) So, the Pastafarians live by 8 rules. But their god is not so preachy as to make them commandments. Thus, these rules are known as the “I Really Rather You Didn’ts.”

This might all seem like internet-born folklore that has little importance in the real world. However, I, Pastafari ushers audiences through the legal battles this curious sect is waging around the globe. There are fights to allow colanders to be worn in official photo identification. There are battles to have Pastafarianism recognized as an official faith with a doctrine that should be taught in schools. There are calls for statues of the Flying Spaghetti Monster to be mounted in public spaces. This kooky doc explains why.

On its face, it seems like a widescale trolling made up of people with too much time and too few real problems on their plates. (Notably, most of the Pastafarians featured in the doc are white people, who seem to be playing at oppression.) None of these colander-wearing devotees will wink at the camera or waver from the seriousness of their faith. They’ll happily preach about a heaven where there’s all the beer and strippers you could ever desire. However, talking-head interviews from their lawyers, professors, and politicians paint Pastafarians as advocates for separating church and state.

Amid all the silliness, this provocative sect is aiming to satirize all faiths as a means of criticizing their impact over law and governance. The doc loops in archival footage of the Scopes Monkey Trial, where teaching the theory of evolution was under attack by Christians. Then, there’s the more recent battle of creationists insisting their views be taught in schools, bakeries that refuse to make wedding cakes for gay couples, tax exemptions for churches, religious exemptions for mandatory vaccines, and the violence waged in the name of faith. Thus, the film posits Pastafarians may be trolling, but can they be trolling for good?

It’s a complicated question, and one that was more comprehensively and thoughtfully explored in Penny Lane’s 2019 doc, Hail, Satan? (Now on Hulu!) There, Lane not only dug into the curious theatrics and motives of The Satanic Temple but also its flaws. I, Pastafari: A Flying Spaghetti Monster Story doesn’t go so deep, in part because it’s only 56-minutes long. As such, Arthur leaves himself no time to explore the group much beyond its intentions and quirkiness. Thus, there’s no reckoning with the arguably racist approach to their iconography and name, which prominently mocks faiths out of Jamaica, India, the Middle East, and Central Asia. Those religious groups are subjected to ferocious and even violent prejudice around the globe because of Christian intolerance and white supremacy. Yet Pastafarian’s juvenile mockery suggests all faiths are equally bad, and therefore worthy of blanket derision. As such, even when the doc offers some salty food for thought, it never stews long enough to be taken seriously.

I, Pastafari: A Flying Spaghetti Monster Story is available on digital July 7.