A dark night. A remote cabin. The howl of the wind and a crackling fire are the only sounds for miles. Then, a sharp tap at the window! This is the perfect setting for scary storytelling, and it’s the crisp premise of the latest Shudder horror anthology, Scare Me. Two strangers who cross paths while renting cabins in the Catskills, decide to convene for a friendly competition to see who can tell the better scary tale.

College Humor’s Josh Ruben writes, directs, and stars as Fred, an ad writer who hungers to pen something more rewarding. Perhaps some time away from everything he knows will help him write the werewolf revenge novel that might be his masterpiece. While out jogging, he comes across Fanny (You’re The Worst’s Aya Cash), who has an acerbic attitude and the reputation for being one of the best horror novelists living. Once darkness falls, the two huddle before firelight, spinning tales spooky and sinister. Eventually, joining in is a pizza delivery guy (Saturday Night Live’s Chris Redd) with a contagious enthusiasm for terror. However, as the night grows darker, real-life horror may spoil this night of fictional frightening fun.

Typically, in anthology scenarios like this, the storytellers are a framework, stepping aside as the film or TV show gives way to showing us the tale unfurled. Ruben shakes things up by keeping us with his storytellers, full time. Instead of transporting us to a troll-infested office space, a creepy grandpa’s deathbed, or the backstage of a nationally-televised talent show, he and his co-stars act out these scenarios in the cabin. It begins humbly, with whispered exposition and impersonations of a frightened child or a growling beast. As Fred rises to play a werewolf, his spine slides forward, making him a stalking, savage thing with a simple shift in physicality, no special effects. However, amid the shadows of this cabin, some playful flourishes creep in. As his hand clutches on a railing, it is truly transformed, covered in dark hair and tipped with sharp, black, claws.

Ruben, Cash, and Redd throw themselves into these tales with a gleefully deranged abandon. They howl and scream, groan and sing. They supply their own spooky sound effects, comically contorting their mouths to create the creak of a floorboard or the shrill shriek of soundtrack strings. However, as they get more into the sway of these stories, real music and sound effects edge into the mix. It feels like magic, like they—and we!—are being sucked into the sickening spin of the horrid yarns spun with crooked grins.

Unlike most anthologies, where the stories are static, Fred and Fanny’s are subject to change as they go. The pair grow competitive, even combative. She challenges his choices, pushing him to veer away from cliché. This keeps the stories feeling spontaneous and alive. Some end abruptly maybe even unsatisfyingly so, as is the case in many an anthology. However, that dissatisfaction barely stings, as Ruben’s script glides from these moments into character beats that dig deeper into this curious trio’s burgeoning bond. They eat pizza, shoot the sh*t, and do drugs. The plot is simple, but the premise never feels thin because of how its cast blooms with personality in what is part hangout movie. Then, comes a final reveal that changes the game, digging more into true terror than comedic scares.

If you loved You’re The Worst, Scare Me is a must-see. Cash is once again a take-no-shit party girl with an alluringly salty tongue. It doesn’t get old. Instead, it’s fun to see her play against a new partner. Fred doesn’t match Jimmy for wits or one-liners, instead, Ruben plays him as a fool flustered in the face of this ferocious female force. Meanwhile, horror fans will revel in the film’s panoply of allusions, from Alien, Jaws, and Halloween to Tale From The Crypt and The Lovely Bones. Yet Ruben succeeds in making a movie that’s better than the sum of its very good parts.

In his feature directorial debut, Ruben expertly weaves in the charisma of he and his castmates with a clever concept, a clear love of horror, a wicked wit, and a raw socio-political edge. This is not just a fun and frightening romp; it’s got something to say. Beyond the thrilling theatrics, the game goofiness, and the unapologetic lust for carnage, Scare Me scratches at a too-true horror that makes its final act ruthlessly chilling. Simply put, Scare Me is superb. 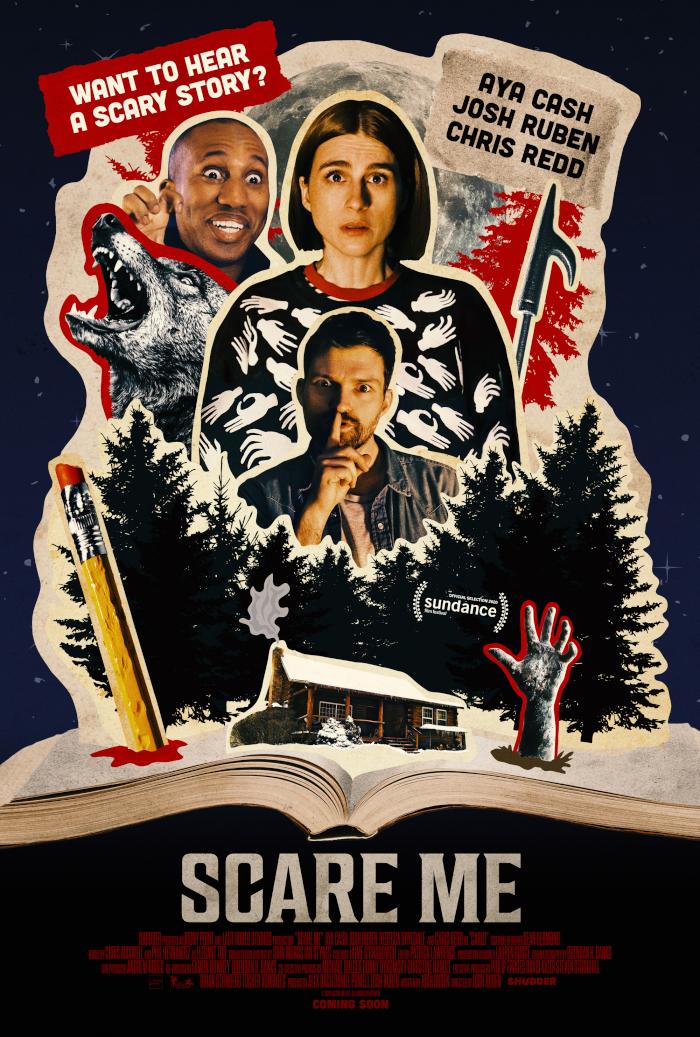 Scare Me debuts on only on Shudder on October 1.

← 'Borat' Is Back, And He Is Taking on the Pandemic is Redneckia | Conan O'Brien Is Reaching Out To Swing States →