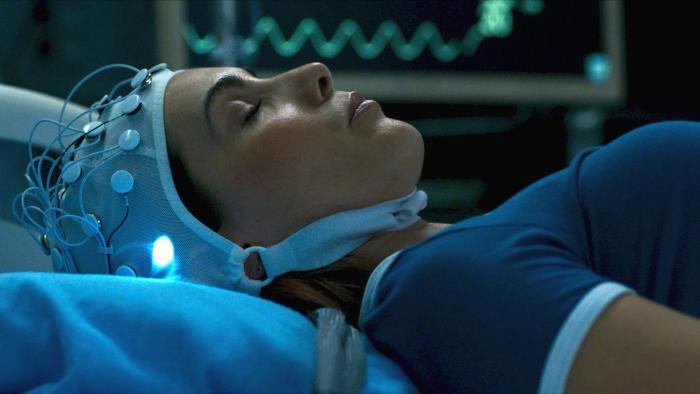 I think it’s safe to say that most of us have spent some time during the past year and a half of pandemic-living managing loneliness. As an only child with no friends I spent chunks of my childhood with only my He-Man figures as company, which is to say that I have an astonishingly high tolerance for being alone, and even I have felt the weight of elongated solitude against this COVID-era. Hard not to when you’re watching funerals for your loved ones unfold via Facebook. And then when I did finally go back blinking out into the sunlight there remained a stutter of unreality to it—a vague sense of displacement. Looking Glass aesthetics. The aloneness lingers.

The best thing that can be said about Neill Blomkamp’s not-at-all-good possession thriller Demonic, which the District 9 filmmaker shot on the cheap during the early part of the pandemic, is that there are moments where he manages to tap into that feeling in a way I haven’t yet seen visualized during this past year. I’ve seen a lot of movies by now that were filmed during the pandemic at this point—more than most, thanks to several film festivals where there are always a couple. They have been comedies and romances mostly; stories that have used our lightly apocalyptic predicament to explore what happens when people get trapped together—the abrasiveness of forced closeness.

There’s been less focus on the solitude aspect, I suspect because that’s a more difficult concept to give the full cinematic treatment, at least without a prominent hook—we’ll watch people trapped on a spaceship by themselves, but you can’t really blame us in 2021 for not wanting to watch two hours of somebody binging Netflix and not showering. Art does not imitate life in many important ways! It’s difficult to communicate human disconnect in a straightforward manner. Doing so via a horror film is a smart choice (see also Rob Savage’s successfully schlocky Zoom-horror Host), and Blomkamp does make some good baseline technical choices in Demonic to get across that sensation, that part-of-but-separate that some of us have become so intimate with.

Carly (Carly Pope) has been having nightmares about her mother. We’ll find out eventually this is with good reason, that 20 years earlier her mother went on a wild murder rampage, but at first it feels more like a regular old-fashioned abandonment tale. Demonic opens inside one of these nightmares (which, like most of the nightmare imagery in Demonic, never manages to be much in the way of nightmarish), and upon waking Carly reels and spirals off into the arms of two long-estranged friends—Sam (Battlestar Galactica’s Kandyse McClure) and Martin (Chris William Martin), who were around back when the bad shit went down with Carly’s mom.

The two scenes where the old friends reconnect in separate pairs have that airless inside-a-bubble feeling that all pandemic-shot movies have, and knowing of these outside circumstances one always wants to forgive, as that’s just the reality of these things right now. We get it. Yet Blomkamp stages and shoots everything out of the gate so blandly, so flat, that half-an-hour into this movie you’re feeling tested—a willful struggle of the ol’ eyelid-droop. The banal performances and writing doesn’t help, while the uninteresting camera-work, shot-reverse-shot over the shoulder nattering on, also manages to bear an Aughts-era digital cheap look to boot. I suppose Blomkamp wanted to first present an unadorned “real reality” to contrast with the otherworldly flights of semi-fancy to come, but the sluggish drone of it just becomes too much to ask up-front, and even then somehow the pulse barely quickens once the giant bird-headed monsters and priest-soldiers start popping up shoot-em-up-style. It’s all so wildly inert.

But back to the beginning (appropriate since this movie feels like one endless beginning)—Carly’s friend Martin tells her that he’s just seen her disappeared mother, the one who’s simultaneously popping up in Carly’s dreams—he says he signed up for one of those medical trials people do for spare cash and while there he saw her, comatose, being exploited in some weird experiment by a nefarious conglomerate called Therapol. (And that’s a great evil conglomerate name, I’ll give Demonic that.) So Carly jumps in her car, beats it on over to Therapol HQ, and before you can say Lawnmower Man five times fast she’s been hooked up by their scientists to a computer that will allow her to wander through her mother’s subconscious like a video-game avatar, all in order to communicate directly with Coma Mom.

If Demonic is remembered at all—and like Lawnmower Man it probably shouldn’t be—Demonic will be remembered for these passages, where Blomkamp exploits newfangled Volumetric Capture technology, which tosses his lead actress into the center of a circular firing squad of cameras, translating her movement directly into a virtual space. The tech is glitchy and strange, sometimes allowing us to see Carly’s face through the back of her head, the world around her being built up only as she moves through it… it all does have a strange beauty and it does capture that sense of displacement I spoke of earlier; that feeling of being part of the world while simultaneously not. The spaces she wanders are ghostly, barren fields and buildings; and if Blomkamp ever did something with any of this we might actually have a movie.

Unfortunately, he drops the ball. For a movie about floating within total dissociative state Blomkamp has his characters just talk and talk the dreams and the nightmares right out of everything. Committing the cardinal sin of telling not showing, Demonic is almost a treatise on how to not build tension. But it’s the computer manual sort, written in code and blunt technical jargon, indecipherable as human or relatable on any front. Any sense of the loneliness and atmosphere that this story begs for is finally smothered to death under the weight of lifeless exposition dumps—somehow a league of Exorcist ass-kickers (oh right Coma Mom is like possessed by a bird demon or something) is reduced to rubble and afterthoughts in the clasp of this film’s talons, all possibility shredded to bits as it limps, one-legged, unto its stark conclusion.

← 'If We Could Set Up a Scenario Where Trump Thinks He's President Again and the Public Send In Scenarios for Him to Deal With, What Would You Suggest?' | Keep James Gunn Away From Directing 'Gotham City Sirens' And Any Other 'Birds Of Prey' Sequels →