Review: Director Haifaa Al Mansour Returns to Her Home Country of Saudi Arabia for the Quietly Satisfying ‘The Perfect Candidate’

“Girl power” is too simplistic of a term to fully capture the energy filmmaker Haifaa Al Mansour builds into her films. Still, on a surface level, the phrase applies. In 2012’s Wadjda, the first feature-length Saudi film made by a female director, Al Mansour captured a girl’s desire for freedom in the face of traditionally conservative thinking. (A solid trio of viewing would be Wadjda, the Dardenne brothers’ The Kid with a Bike, and Maïmouna Doucouré’s Cuties.) After her subsequent films, 2017’s Mary Shelley and 2018’s Nappily Ever After, took her outside of the country narratively, Al Mansour returns to Saudi Arabia with The Perfect Candidate.

A slice-of-life portrait of a young female doctor who decides to run for political office, The Perfect Candidate is a little repetitive and slightly obvious in its crowd-pleasing conclusion. That “girl power” vibe is evident in how Al Mansour emphasizes the creativity, resourcefulness, and take-charge qualities of Saudi women, and in her refusal to acquiesce to patriarchal demands. Perhaps The Perfect Candidate belabors that point a little bit too much, especially with a final scene that some might read as emotionally hurried. But perhaps those people are heartless jerks! In its focus on the shifting roles for women, the skepticism they’re fighting against, and the power they’re attempting to accrue for themselves, The Perfect Candidate is a lovely reminder that change begins one small step at a time—but it begins.

Mila Al Zahrani stars as Maryam, a doctor who works at the Al Hana Medical Center clinic. In a purposefully provocative opening, The Perfect Candidate opens with Maryam driving, a right that Saudi women have only had since June 2018, and were the last in the world to receive. (The documentary Saudi Women’s Driving School covers this well.) In her black headscarf, white doctor’s coat, and plastic gloves (so that she never directly touches anyone, which could be considered inappropriate by the country’s interpretation of Islamic law), Maryam follows the Hippocratic oath and treats all kinds of patients—if they’ll let her. Men from the surrounding villages often bristle against her care, complaining that a woman doctor is improper or unknowledgeable. Further complicating Maryam’s daily routine is that a longstanding water leak outside of the clinic has turned the sandy road leading to the emergency room into a muddy pit. Ambulances don’t want to drive into it, wheelchairs get stuck in it, and older patients can barely make their way through it.

Maryam has complained to her city councilman about the leak and the road, but he does nothing: “If it were only difficult, sir, I wouldn’t be bothering you,” she says when explaining the situation, but he hangs up on her. The altercation is just one of many in which Maryam feels diminished, undervalued, and ignored. The fact that her parents were both musicians—a taboo profession—resulted in her and her sisters’ social ostracization; Maryam and her sister Selma (Dhay) particularly stick together because they don’t have many friends outside the family. When Abdulaziz (first-time actor and real-life musician Khalid Abdulrahim) and his band are offered the chance to tour the country playing Saudi folk music, it’s a once-in-a-lifetime opportunity that means his daughters will be on their own. And his unreachability while on the road means that Maryam misses out on a job interview at another hospital because she can’t travel without his permission. Maryam is an adult woman and a working professional, and she’s tired of being told what she can do and when she can do it. 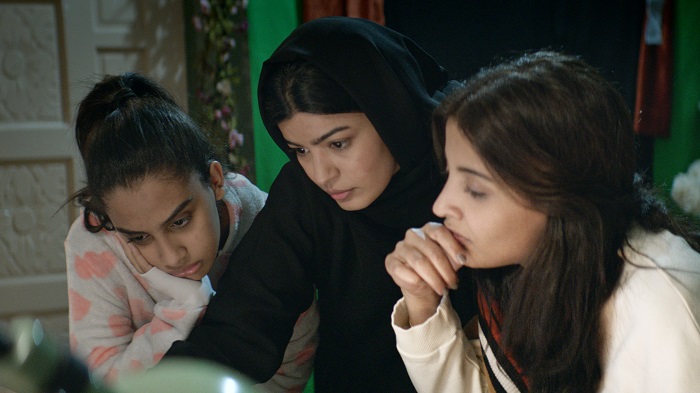 Galvanized into action by all of these setbacks, Maryam decides to run for city council. She knows the obstacles facing her as the town’s first female candidate, but she wants the hospital road paved, and she’s not going to stop until it’s done. As The Perfect Candidate progresses, we follow Maryam into situations that reveal the depths and layers of female relationships in this town. The sisters attend mosque together for Eid; they sing a lullaby that their mother used to croon to calm them down; and they combine their resources to support Maryam’s campaign. Selma runs a thriving wedding photography and videography business, and helps put together Maryam’s campaign ad and first awareness event—a fashion show of abayas. Onstage, as Maryam comes alive when she speaks about the danger of the unpaved road, Al Zahrani channels the young woman’s increased confidence and sense of purpose.

But is that enough? A Perfect Candidate doesn’t ignore how a prevailingly conservative ideology could, by its very existence, limit Maryam’s progress. A couple of standout scenes see Maryam facing off against a condescending male journalist and an increasingly hostile tent full of potential male voters. “May God protect us from you,” they say, and it’s another scene in a series of them in which Maryam is unswayed by others’ doubt. On the one hand, that recurring setup gives The Perfect Candidate a little less of a narrative arc, since Maryam runs up against opposition so often and is so unshaken in response to it. On the other hand, Al Zahrani plays the character as so determined and so unwavering that her certainty never reads as artificial. There’s even a Pretty in Pink-evoking moment, if you’re into that!

Aside from Al Zahrani’s appealing performance, The Perfect Candidate also delivers with a thoughtful subplot focused on Abdulaziz’s unconventional dream of performing music in public. Al Mansour stages these scenes with visual slyness, focusing on the band onstage, flickering between the musicians’ faces, hands, and instruments, and then cutting to the audience—which is sometimes as few as three people, sometimes as many as a couple dozen. Do the tiny groups diminish Abdulaziz’s pride, or effort, or joy? Do the doubters or hecklers dampen Maryam’s sense of right and wrong? No, on both counts. Father and daughter are too hopeful, too determined, and too humble to let others’ judgments lead them astray, and The Perfect Candidate is a pleasing reminder that sometimes the joy and fulfillment received from doing something is irrespective of its outcome.

The Perfect Candidate opens in select theaters as of May 14.

← ABC Announces a Slew of Renewals and Cancelations | Review: 'Those Who Wish Me Dead' Is More Like '(Run) Forest Run' →