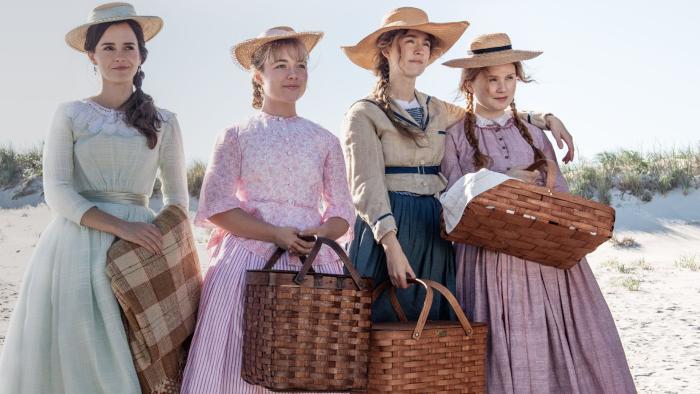 “Jo is a lost cause,” says an eye-rolling Aunt March of her incorrigible niece, who has outbursts of temper, plays pirate instead of princess, and expresses joy through shocking slang like “Capital!” In this moment, where the marvelous Meryl Streep plays the no-nonsense, wealthy widow, I realized what a clever follow-up Little Women is to writer/director Greta Gerwig’s universally acclaimed Lady Bird. Both films star Saoirse Ronan as a headstrong teen at war with the suffocating expectations of her family. Both feature heartbreaking romances between Ronan and a beguiling Timothée Chalamet. And both explode with an emotional honesty so ruthless it’s breathtaking. In every sense, Little Women is a sensational sister film to Lady Bird.

Based on Louisa May Alcott’s 1868 novel, Little Women follows the four March sisters from girlhood to womanhood, but Jo is at the film’s center. Rather than unfolding the sisters’ stories chronologically, as Alcott did, Gerwig shakes things up, beginning in media res. Aspiring writer and unapologetic tomboy Jo March (Ronan) is already living in New York City, where she’s selling her “short and spicy” stories to help her impoverished family back home in Massachusetts. Don’t worry. No major moments from the beloved book will be overlooked. As Jo reflects on she and her sister’s lives, flashbacks whisk us back to Christmas celebrations, terrible quarrels, hilarious mishaps, and Laurie (Chalamet).

As in Lady Bird, the chemistry between Ronan and Chalamet is immediate and exciting. The mischievous smiles they share feel like treasured secrets. Their casualness in the face of so much stuffy etiquette feels a luxurious freedom. Then there’s the dancing. In a film bursting with moments gorgeous and poignant, this was my absolute favorite.

Jo has gone to a ball in the nicest dress she owns, which is marred by scorch mark from standing too close to the fire. The Marches can’t afford to replace it, so her elder sister Meg (Emma Watson) begs Jo to keep it hidden as best she can, lest she embarrass them all. This leads Jo to duck into a quiet room to escape the crowd, and there she finds Laurie, a shy, pretty, and sweet young gentleman who is instantly charmed by her scorch mark, street slang, and free spirit. The two decide to dance away from prying eyes. But rather than some irreverent waltzing down unused hallways, they frolic about on a dark porch, leaping past brightly lit windows and flailing limbs about without fear of what’s proper. They’re thrashing about would have them perfectly suited to the crowd of a rock show. It’s a frenzy of misfits, and it’s absolutely glorious.

By the time Jo is in New York, she and Laurie are no longer in touch. The flashbacks not only reveal why, but also present this smiling boy as a path of what might have been. As Jo tries to make sense of her future, looking back becomes intoxicating and rattling. She remembers the games, the laughs, the dancing, and that final fight. And like so many of us, she wonders if she made the right choice. The swinging back and forth between these timelines makes these memories feel vivid, so close we could touch them. Which makes Jo’s uncertainty about what to do next all the more nerve-racking. By restructuring, Gerwig managed to bring tension back into a story that’s plot points have been well known for more than 150 years.

As with Lady Bird, her incredible cast makes the most of every beat of her stellar script. Streep is cracklingly funny as the snooty Aunt March. With a low grumble and a soft smile, Chris Cooper swiftly captures Mister Laurence. Laura Dern brings an easy warmth but profound depth to the March girls’ mother Marmee, who is more than just sweet in this version. As motherly sister Meg, Emma Watson’s big, dark eyes swell with excitement, regret, and love. Eliza Scanlen brings a glistening tenderness to meek Beth. Florence Pugh, who wowed critics as the lead in the trippy horror-thriller Midsommar, brings a defiant intelligence to Amy, making the youngest March far more complex than the selfish brat she might be written off as.

Far from the pretentious crush he played in Lady Bird, Chalamet exhibits and openness here that makes it impossible not to root for Laurie, even when he’s playing the drunken buffoon. His scenes with Ronan are enthralling, deftly capturing the exhilaration of first love. However, his scenes with Pugh scratch at something more sophisticated and emotionally rich, becoming both bittersweet and hopeful even as her face falls into a tight-knit frown and his eyes ache with longing. Then all of this gracefully tumbles into a climax where Laurie gets an unexpected but absolutely perfect laugh line that is not only funny, but also recognizes the complexities of love, its many forms, and how some things aren’t so easy to let go.

At the heart of it all is Ronan, the leading lady who Gerwig has entrusted twice to play a complicated young heroine who is reckless, smart, furious, and resilient. What these two build together onscreen is a miracle. Their heroines don’t just feel relatable, they feel alive, as if Lady Bird or Jo might march right off the screen to pick a fight, give a bear hug, or grab your arm to drag you into a wild night you might regret but won’t forget.

Gerwig’s scripts offer moments of striking vulnerability, like a broken-armed Lady Bird asking her mom, “What if this is the best version (of myself)?” Or a fired-up Jo confessing the about the burn on her dress, not only revealing her sloppiness but exposing her family’s poverty. And in each, Ronan delivers a performance that’s so rich with layers, each viewing allows you to see another, be it agony, rebellion, or curiosity. With a glance, she can convey so much, and knock us out, and Gerwig knows it. These moments let us sink in the skin of these girls, who are strong yet fragile, magnificent and messy. And through them, we might feel seen, loved, and forgiven for our faults. Or at the very least, we feel alive—radiantly, messily, and unmistakably alive!