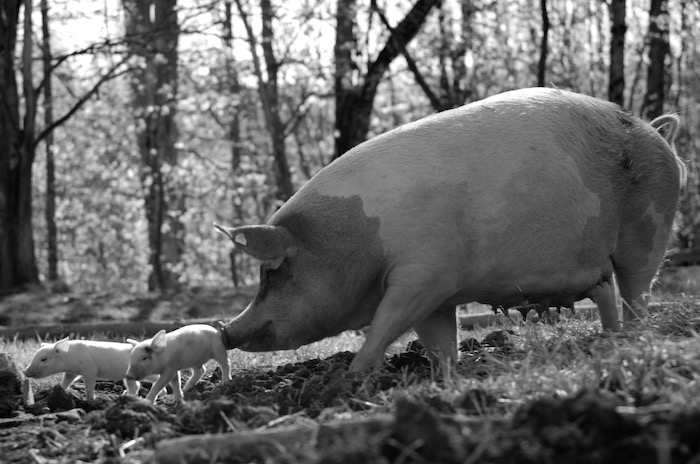 Viktor Kossakovsky’s gorgeously shot portrait of a pig’s life begins with the titular sow feeding her newborn litter of piglets in a charmingly bucolic wooden pigpen. The intimate close-ups, daringly free of voiceover or music, feel like they’re nearly in real-time, with the scene going on for as long as it takes for Gunda’s patience to run out and determine that mealtime is over, shaking the sucklers off.

Gunda allows for the sort of close-up observation of animal life that many modern viewers don’t experience in real life. Perhaps if you’re coming from that background, it might be a slightly different experience. I, personally, have spent a fair bit of time on a farm. When I was little I would sometimes climb up the tallest of the stone garden walls at my grandmother’s dairy farm and just sit there quietly until the animals took no notice of me, watching the herding dogs and barn cats and the cattle in the nearby field go about their business, pretending I was a naturalist. So, this film was in some regards a very nostalgic experience. However, being someone who has spent a fair bit of time on a farm, the very careful and pointed choices being made in this documentary in what it chooses to show—and chooses not to show—also stand out like a giant neon sign.

Kossakovsky goes to significant lengths to never show a human. On the few occasions a tractor or other farm vehicle makes a cameo appearance, they feel like sentient metal beings since their operators are so intentionally kept out of frame. A chicken slowly creeps its way out of an unlocked crate, as if said crate randomly materialized in a field one day.

The result is a strange pseudo-wild, an intimate portrait of farm animal life that smooths away the inherent artifice of agriculture—a beautiful picture of a utopia that doesn’t really exist. Imagine a world where these peaceful creatures roam free, the movie seems to say. Let them live like this, safe from our evil clutches. The issue is the “peaceful creatures roaming free” bit is rather dependent on the “being ensnared in our evil clutches” bit. Meat is murder, that’s true. Any of these creatures being set loose in bonafide nature would also be murder. Do you know how long a domesticated chicken survives in the wild? Approximately zero days.

The concept that the bucolic Eden presented throughout most of the movie could exist without the cruel realities of the emotionally devastating finale also being part of the deal is a nice fantasy that translates to a very niche reality. That is, sure, for the scattered handful of A-list actors and other wealthy hobbyist farmers who choose to raise animals for the hell of it, it’s possible, but that’s about it. (To be clear, this is not a dig. Sam Neill, never change.)

Still, there’s a lot of excellent filmmaking happening here. The crisp black-and-white imagery bestows a wonderous majesty upon the creatures it profiles. There’s an inherent silliness to chickens, for instance (see: rubber chickens, the chicken dance) that Gunda manages to overcome. The fowl in question, through Kossakovsky’s lens, maintains an incredible gravitas, even when the creature is discovering a wire fence is not, in fact, a surmountable obstacle through trial and error. It really should not work, but somehow it does. I did not laugh at that chicken even one time.

While fascinating and beautiful, Gunda feels like it is trying to present itself as something unbiased and utterly unfiltered, which is, to keep to a theme, utter hogwash. There are plenty of creative decisions being made here, and a definite angle being presented. As an emotional argument, it takes the viewer on an incredibly effective journey. You will definitely feel guilty for eating bacon after the heart-wrenching finale. But the thesis underneath it all is a little bit bonkers.

Gunda is now playing in theaters.